Facing the gloom of climate change, we have hope and solidarity 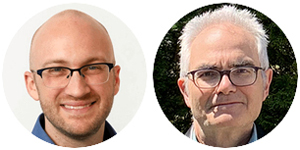 By Nicholas Collura and John Humphreys • For EcoPhilly • Posted October 1, 2021

Many of us in greater Philadelphia are still shaken by the force of Hurricane Ida. Those of us whose homes did not sustain severe damage are probably aware of how close we came to disaster.

Last week, I spoke to a woman in New Jersey who watched helplessly as a tornado formed in the big field across the street from her house. It swept toward her with alarming speed and diverted only at the last minute, about a mile away. She knew that what went on to devastate her neighbors’ homes and communities could easily have befallen her.

It could easily have befallen any of us.

Perhaps some of you did experience serious loss of property, loss of savings, or even loss of loved ones. If this is true of you, we want to convey our deep and sincere condolences.

That week, Archbishop Nelson Pérez announced solemnly, “we awoke to historic flooding not seen in this area for over 150 years. Many neighborhoods in the City of Philadelphia and our suburban counties have been devastated. Tragically, lives have been lost to this natural disaster. The damage to residential and business property is only now being realized and will be immense in the final tally.”

This message gave us a chill. Not five months ago, in announcing the creation of EcoPhilly — an archdiocesan initiative to promote sustainability and combat climate change — we wrote in CatholicPhilly.com that “in the upcoming decades, the Philadelphia area will experience heavier flooding … and higher costs to local families.”

Even we feel shocked that our prediction is coming true far sooner than we had hoped.

The facts are sobering: Eight of the 10 hottest years on record occurred in the last decade. One in three Americans experienced an extreme weather event this year; that’s triple the number who experienced an extreme weather event five years ago. British Columbia reached Death Valley temperatures this summer, and the coldest cities in Siberia also reached 118 degrees. Wildfires in the American west are visible from space.

Things will only get worse, and this is without mentioning the already-ferocious hurricane season of 2021, which was exacerbated by climate change. Some are predicting that we will never have a temperate summer again — or, as Shawn Hubler put it, “this is the summer that feels like the end of summer as we have known it.”

If other concerns are more important to you than climate change, rest assured that this monumental crisis will impact and exacerbate every one of those concerns.

If all of this speaks to a true crisis — and we are certain that it does — where are we to find hope?

In her book “Active Hope,” Joanna Macy suggests that there’s no hope for the world unless all of us act … but if all of us act, then we will find hope.

It’s like a saying attributed to St. John of the Cross: “Where there is no love, put love, and you will find love.” We could say the same about hope.

Climate action may not sound like the sort of thing the Catholic Church does. Our awareness of climate change is only a few decades old; that’s a lot of time for the scientific community and for any of us, albeit not for a church that “thinks in centuries.”

Yet the last three popes, including St. John Paul II and Pope Benedict XVI, stated confidently that climate change is real and dangerous. Now Pope Francis is joining the United Nations’ Climate Change Conference in November to model for the whole church the importance of climate action.

We at EcoPhilly have found that being part of the solution has moved us from despair to active hope. For one thing, we have discovered so many collaborators. The Catholic Climate Covenant, run with the cooperation of the U.S. Catholic bishops, is working hard to unite groups like ours across the country so that collectively, we can make meaningful change. You can find some wonderful resources here.

We are responsible first and foremost for our own backyard, so we also implore you to visit and write to us at EcoPhilly.org to see what you can do to help us make our own archdiocese a green one, in conformity with the Vatican’s inspiring, global action platform. This would be a great way of honoring the upcoming feast of St. Francis.

And that’s the other source of hope: moving, as climate psychologist Renée Lertzman suggests, from “I” to “we.” We’re “part of a much bigger picture and a much bigger story,” she suggests.

After any disaster, we derive hope from watching the “helpers,” from seeing communities band together. The disciples of Jesus, gathered as a community and later as a church, must have drawn the same strength from their shared witness to the Gospel. We need that sense of community right now.

Life on this planet is changing irrevocably and profoundly, and if we are not adjusting our approach to life — and to church — accordingly, other people (real people, and perhaps we ourselves) will continue to suffer calamities like Hurricane Ida. Together, however, we have alternatives to gloom and isolation: we have hope and solidarity.

More information can be found at www.EcoPhilly.org.

PREVIOUS: In praise of a rare breed, the pro-life Democrat