Visitors to Mother of Divine Providence Parish's Christmas Craft Fair and Bazaar peruse the many offerings of professional crafters Nov. 20.

Mother of Divine Providence Parish in King of Prussia held its 20th annual Christmas Craft Fair and Bazaar on Saturday, Nov. 20. The event, which was cancelled last year due to the COVID-19 lockdown, has a history of more than 50 years and consistently draws over 1,000 shoppers in recent years.

Both shoppers and vendors alike expressed excitement for the event’s return this year.

“Many people are saying they missed this so much,” said Marianne Houston, Mother of Divine Providence parishioner and the event’s treasurer. “These events bring out people you don’t usually see. I’m seeing people I haven’t seen in two years.”

“This is like a reunion,” said Jo Vadovsky, a parishioner of St. Mary Parish in Schwenksville. “People come here to see old friends, people they haven’t seen in a long time.”

(See a photo gallery of scenes from the event here.)

“It’s always been something to look forward to,” said Barbara Hamill, Mother of Divine Providence parishioner and a former chairperson for the event in previous years. Hamill has attended the event consistently since its inception over 50 years ago. She spoke of the excitement she and her family experienced when attending the event each year, “knowing it would soon be Thanksgiving and then Christmas.”

The Christmas bazaar is the parish’s longest running event, and originally was a weekend-long celebration, beginning on a Friday evening and culminating with Breakfast with Santa on the following Sunday morning.

The event has grown and changed over time, consisting of “all homemade crafts by the parishioners, and games for the kids,” Hamill said.

The bazaar took a hiatus about 20 years ago and returned in 2001. It became a one-day event and grew to include more than 100 craft vendors, along with children’s activities, a café serving breakfast and lunch, homemade baked goods, basket raffle, “Attic Treasures” and a 50/50 raffle.

During respites from shopping, people in the café enjoyed meatball sandwiches, pulled pork sandwiches, pierogies, chili and hot dogs. All food was donated by the parish, and parishioners volunteered for all the cooking duties. Additional assistance with setup and cleanup for the event was provided by the Mother of Divine Providence Knights of Columbus Council, No. 14454.

“People were ready to come back,” said Hamill of the event’s return this year.

Craft vendors, many of them sidelined last year by cancelled events, were also glad for the event’s return.

“My whole business was shut down, and I went on unemployment,” said GiGi Singh, who grew up in South Philadelphia in St. Monica Parish, and now lives in West Chester.

Singh, who makes handcrafted jewelry, described how she felt her “creativity was locked down” during the 2020 COVID-19 restrictions, and she had difficulty finding inspiration. “I was in a rut. Everybody was,” she said.

Singh says she eventually found new inspiration working with a new material, a polymer clay she crafts into jewelry, and she enjoys the return of events where she can show and sell her new jewelry creations.

“People are spending money this year, more so than in 2019,” Singh observed. “People want to make themselves happy this year.”

Mari-Lyn Young of Hellertown has been a craft vendor at the event for 15 years, selling hand-sewn snowmen. Young also felt the pinch of craft events being cancelled last year.

“I don’t have an online presence,” she said. “I like to keep it simple. I did zero shows last year.”

In addition to a loss of income, Young said she also felt an emotional toll from the lockdown. “I missed the people, and you get your self-esteem from your job,” she said.

With the return of craft vendor events this year, Young said she’s noticed “a lot of support for smaller businesses.”

“I was putting things up on Facebook, and shipping all over the U.S.,” said Matalavage. “I learned to make do with what I had.”

Matalavage became a crafter at age 13, working alongside her mother. She also admitted feeling in “a slump where you didn’t want to do anything” during the lockdown. 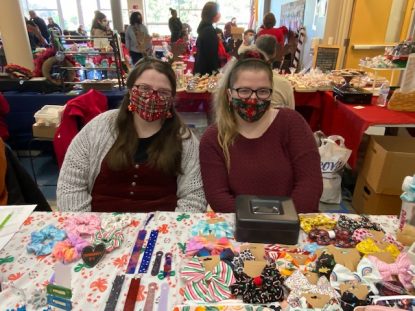 Sisters Nicole and Alyssa Nyce of Lansdale display their home-sewn items. This was their first time at the event as craft vendors.

The bazaar also drew some new, first-time craft vendors. Sisters Nicole and Alyssa Nyce of Lansdale started sewing during the lockdown. The Mother of Divine Providence event was their first time at the event as craft vendors. They sold their sewing creations of colorful makeup bags, hair bows and hair scrunchies.

“We had lots of time at home to learn new skills,” said Alyssa Nyce.

“I still worked during the lockdown, and this was a great way to unwind at the end of the day,” said Nicole Nyce.

Amanda Schwartz of Lansdowne is also a new craft vendor at the event. She started making jewelry out of vintage watch parts last summer after inheriting a box of watch parts from her grandfather. She said she “just recently found the inspiration,” and she plans to attend more such vendor events. She also opened an online store on the Etsy e-commerce website.

Parishioner and event volunteer Ann Miller noted that the event requires many volunteers, many of whom are students from both local Catholic and non-Catholic schools, volunteering for service hours. She said that the event provides “both fellowship and a fun time.” 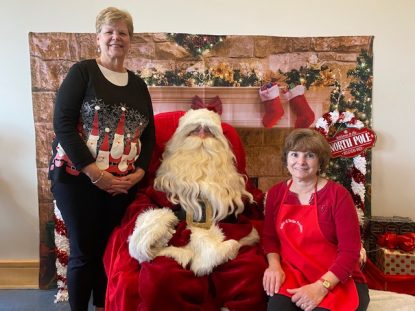 Sue Swinty Lewis (right), chairperson of the Mother of Divine Providence Craft Fair and Bazaar, and Marianne Houston (left), treasurer of the event, take time out to pose with Santa Claus.

Ashley Sion, a junior at Archbishop Carroll High School in Radnor, worked at the bake sale table as a volunteer alongside her mother Karen Sion, selling festive cupcakes, cookies and other home-baked items. Ashley Sion said she liked “seeing people again” at the event.

Brian Toth, a senior at Pope John Paul II High School in Royersford, grew up in Mother of Divine Providence Parish. He has fond memories of being a Kindergarten student at the parish school and coming to the event for the first time with his parents. “I was barely taller than the tables,” he said.

Toth became a volunteer at age 10 and has been volunteering for the event ever since.

“It’s not like a store,” he said of the bazaar. “People put so much time into everything they’re selling here. I love seeing every year what everyone creates.”

Toth said he plans to attend college locally and wants to come back for more Christmas bazaars and other events at his parish. “These are my roots,” he said.

NEXT: During holidays, lean on God more than ever for addiction recovery, say local experts