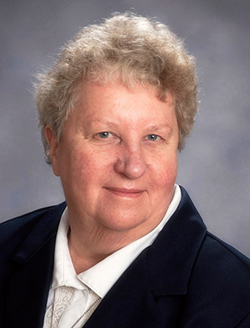 Born in Philadelphia, she was the daughter of the late William and Helen (Traum) Mayer and raised in St. Athanasius Parish, Philadelphia.

She attended the parish school and graduated from Little Flower High School in 1958. Later, while in the I.H.M. community, she earned degrees from Immaculata College and St. Charles Borromeo Seminary.

She entered the Sisters, Servants of the Immaculate Heart of Mary in 1959 and received her habit and her religious name, Sister Mary Annunciata, the same year. She pronounced her first vows in 1961.

Last year Sister Dorothy went to Camilla Hall to assist. Not long after she arrived she was diagnosed with cancer but served there in prayer until her death.

She is survived by her brother William and her sister-in-law, Helen; her nieces, nephews and grandnieces; and by her I.H.M. community.

The funeral Mass was celebrated Oct. 23 by Fathers Joseph Brandt, Michael Callaghan and Anthony Costa, who was also the homilist.