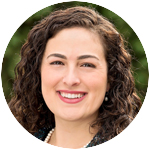 Something about Advent, and the Christmas season that succeeds it (or, in the secular sphere, envelops it), draws the eye to beauty.

We gently unwrap delicate decorations and place them prominently in our homes and parish sanctuaries; out comes sparkling crystal, glittering baubles, velvet emerald, decadent crimson and every manner of silver and gold.

Our exquisitely carved figurines find their places in Nativity scenes and twinkling lights line windows and doors. The austerity of Lenten purple can wait; the explosion of Advent purple (somehow different!) is here.

While much of this beauty is made by humans and machines, it still orients us to the beauty of the season, a love crafted by God’s own hand.

The inbreaking of the Incarnation, where God enters into our mess, is so profoundly beautiful in and of itself. It feels as grand as the “big bang,” the “let there be light,” and yet is quiet — tucked away in a manger in Bethlehem.

It is difficult, then, not to think of my favorite poem by Father Gerard Manley Hopkins, “God’s Grandeur,” whose language is as exquisite as the trappings by which we find ourselves surrounded:

The world is charged with the grandeur of God.
It will flame out, like shining from shook foil;
It gathers to a greatness, like the ooze of oil
Crushed. Why do men then now not reck his rod?
Generations have trod, have trod, have trod;
And all is seared with trade; bleared, smeared with toil;
And wears man’s smudge and shares man’s smell: the soil
Is bare now, nor can foot feel, being shod.

And for all this, nature is never spent;
There lives the dearest freshness deep down things;
And though the last lights off the black West went
Oh, morning, at the brown brink eastward, springs —
Because the Holy Ghost over the bent
World broods with warm breast and with ah! bright wings. 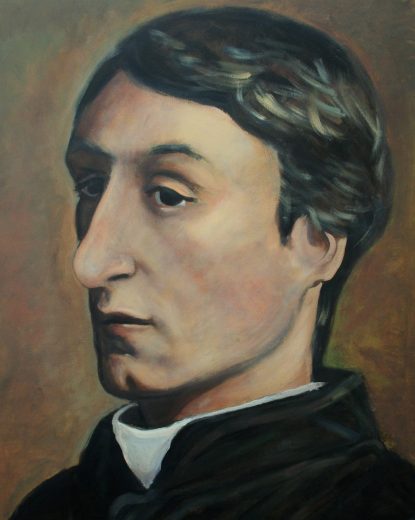 This is a portrait of Jesuit Father Gerard Manley Hopkins. Father Hopkins was an English poet in the Victorian era. (CNS photo/Cédric Charleuf, courtesy the Jesuits in Britain)

Gerard Manley Hopkins was a Jesuit priest and English poet of the Victorian era. Much to the chagrin of his Anglican family, he became Catholic and was received in the Roman Catholic Church by St. John Henry Newman.

His poetic style was spectacular and unusual, in contrast to his austere and melancholic life as a Jesuit. Indeed, the juxtaposition is a fascinating one for the drama of his writing, especially a poem about grandeur.

Reading this poem (which is my absolute favorite!) I see so much Advent allegory at play, though I cannot say that it was Hopkins’ intent. As this Advent has been preceded by so much pain, division and separation, it is well worth turning our eyes toward beauty.

The exceptional wordplay at the start paints such vivid pictures: the “charge” of God’s grandeur like a spark from a bolt of lightning; the “flaming out” with a fizzle; the “shine of shook foil,” with a sound you can imagine crackling; the “ooze of oil.” How vivid, like the beauty of this season!

As our souls look toward Christmas at the end of this Fourth Week of Advent, we prepare for that Incarnation, the inbreaking of the light of God into the darkness of our world (“though the last lights off the black West went/ Oh, morning, at the brown brink eastward, springs”).

While it takes flesh in the simple way of an infant, we know there is more to the story: The world suddenly, almost inexplicably, becomes charged with God’s grandeur. Our humanity is glorified with Our Lord accepting it as his own; he “wears man’s smudge and shares man’s smell.”

Of course, this period is not just for beauty and seasonal cheer, though these are happy side effects; this is a season of waiting, anticipating the coming of the Christ Child as enthusiastically as we await the second coming of Christ.

How much we all have awaited this year: an end to the pandemic; a spirit of unity amid the toxic divisiveness of our country, regrettably mirrored by our church; healing for sick loved ones; transitions from one life stage to the next; good news in a time that seems to ceaselessly bring the opposite.

Much like the people of God in the time of Christ, we may feel surrounded by that which separates us from the God who loves us.

And yet, here is where the hope comes in (“And for all this, nature is never spent”). That God who loves us chooses, over and over, to break into our mess and charge our world with God’s own grandeur, to dig out the “dearest freshness deep down things” amid the dust and dirt of our lived reality.

We await this annual Incarnation in this hopeful season, and we know it points to what is to come. Beauty can be found in the waiting, in that anticipation, in the knowing that what is promised ahead of us is far, far better than anything we have seen before — and that is more beautiful than any decoration or ornament we’ve hung this season.

Perone is the national coordinator of ESTEEM, the faith-based leadership formation program for Catholic students at colleges and universities across the United States.

PREVIOUS: St. Ephrem on Mary, ‘a cause for wonder’

NEXT: Amid the darkness, the real Star shines