Christmas traditions prepare faithful for the joy of Jesus’ birth 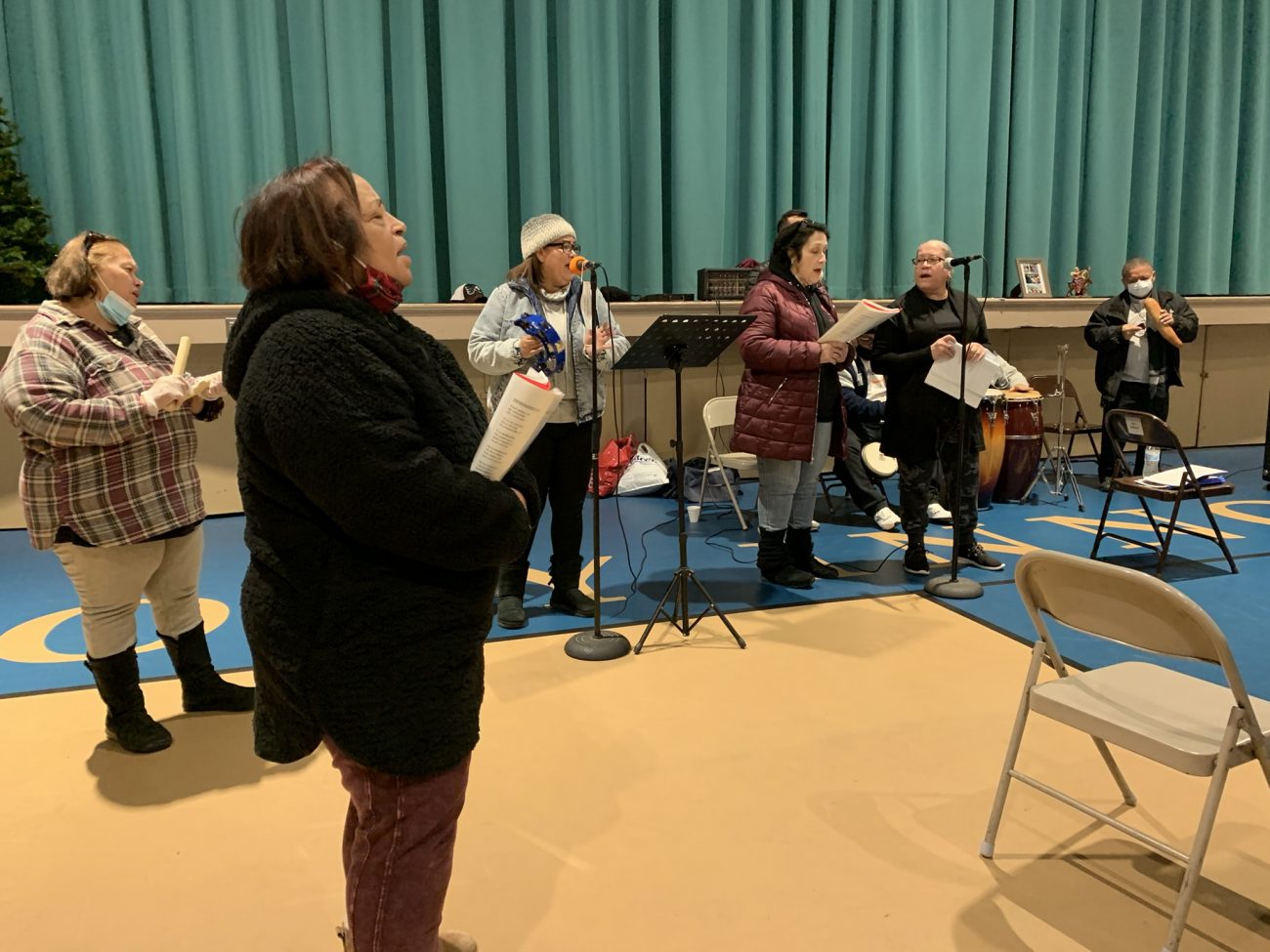 Participants gather for the posadas, which reenact Mary and Joseph's journey to Bethlehem, at Holy Innocents Parish in Philadelphia, Dec. 21. (Gina Christian)

Faithful throughout the Philadelphia Archdiocese are celebrating Christmas with an array of cultural traditions, all uniquely translating the universal joy of Jesus’ birth.

Since Dec. 16, Hispanic Catholics at area parishes have been preparing for the Nativity of the Lord through Las Posadas (“the inns”), nightly reenactments of the journey of Mary and Joseph to Bethlehem that continue until Dec. 24. Participants typically process to a designated host’s house, led by two individuals dressed as Mary and Joseph, for whom they request lodging. The groups then recite the rosary, reflect on Scripture and sing Christmas carols over refreshments.

The custom, which originated in Spain, took root in Mexico and spread throughout Central and South America. Today, immigrants from a number of Spanish-speaking nations keep the posada tradition vibrant throughout the archdiocese.

Due to COVID, parishes such as Holy Innocents in Philadelphia have moved the posadas from the home to the hall, allowing participants to maintain social distancing amid the prayers and singing.

St. Joan of Arc, Holy Innocents’ worship site in the city’s Harrowgate section, also hosts the posadas in its church, and the two series of gatherings “really help prepare the hearts of those in attendance for the Christmas miracle,” said pastor Father Thomas Higgins.

With “prayer, music and reflections that help participants to experience the presence of God,” the posadas are also “an invitation to families not really coming to church to get back to their faith,” Father Higgins said.

Similarly, Filipino Catholics have been readying themselves for Christ’s birth through Simbang Gabi (Tagalog for “night Mass”), a novena of liturgies celebrated on the nine days preceding Christmas. The archdiocesan Filipino Apostolate hosted this year’s series at St. James the Great Parish in Elkins Park, where Auxiliary Bishop Michael Fitzgerald joined pastor Father Efren Esmilla and some 300 faithful Dec. 19 for an afternoon liturgy.

Some trace this tradition to Spanish-speaking Augustinian missionaries, who had held similar Masses outdoors in Mexico to evangelize Indigenous peoples. In the Philippines, clergy generally celebrated the liturgies at dawn, before laborers began their workday, although in urban areas the Masses were moved to the evenings. 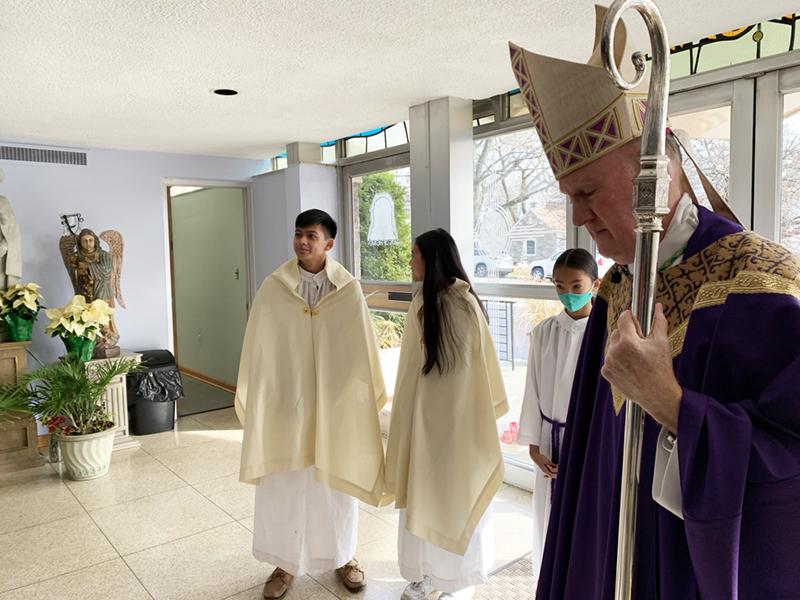 Maronite Catholics also undertake a pre-Christmas novena, a practice that may have been sparked by 16th-century Jesuit influence. Chant, prayers, hymns in Syriac (a dialect of Aramaic) and Benediction of the Blessed Sacrament are all incorporated into the novena. At St. Maron Maronite Catholic Church in South Philadelphia, Bishop Gregory Mansour of the Eparchy of Saint Maron of Brooklyn celebrated the Divine Liturgy (as Mass is known in Eastern Catholic churches) and the Christmas novena Dec. 22.

In a number of cultures, lavish Christmas Eve dinners are prepared in advance of midnight Mass. Archbishop Nelson Pérez recently shared memories of his Cuban-American family’s Dec. 24 Noche Buena (“Good Night”) meal, which featured an entire roasted pig and was followed by la Misa del Gallo (“the Mass of the rooster”) at midnight.

Many Italian Catholics set their tables for La Vigilia di Natale (“the vigil of the Nativity”), a feast of seven different fish that likely originated in southern Italy – and whose number of courses evoke for some “the seven sacraments,” said permanent Deacon Leonard DeMasi, director of religious education at St. Monica Parish.

“It was initiated at a time when Christmas Eve was a day of fasting and abstinence,” he said. “You did not eat any meat, and when the church bells rang at 12 on Christmas Eve, you were able to eat meat again.” 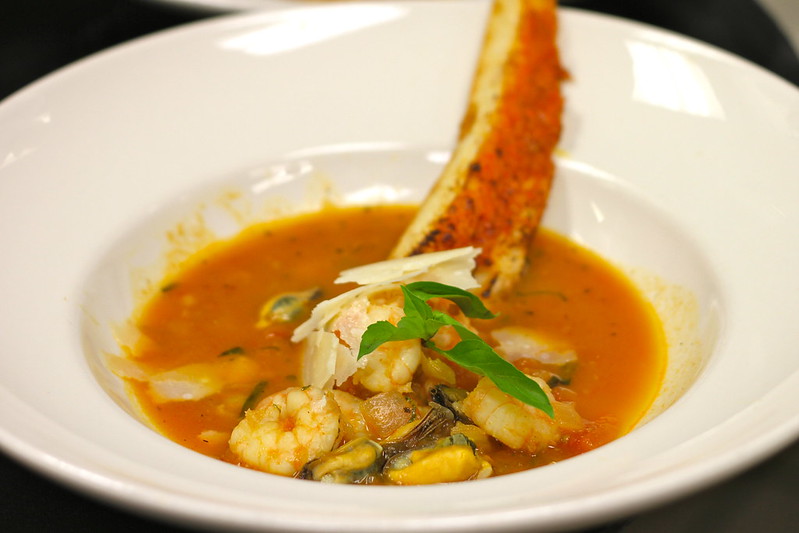 The Italian “Vigilia” meal on Christmas Eve consists of seven types of fish, such as this cioppino with salmon, shellfish and salted cod. (G.W. Fins/Flickr)

Deacon DeMasi listed “baccalà (dried, salted cod), smelts, octopus, squid and eel” as standard for the Vigilia menu, along with “either clams, crabs and stuff like that to make up the total of seven fish.”

He admitted the switch to seafood on Christmas Eve was “never a penance” for him, since he likes “all kinds of fish.”

However, he added, many at St. Monica still abstain from meat on Fridays throughout the year, including pastor Father Joseph Kelley.

“He doesn’t serve it at all in the rectory on Fridays,” said Deacon DeMasi. “That’s the Italian side of him.”

“You cannot sit down to supper until the first star in the sky is visible,” she said. 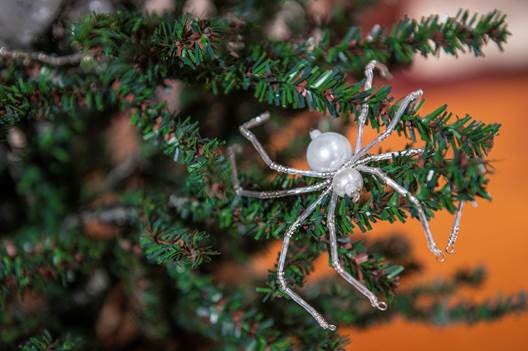 The meal “usually starts with the father bringing in a didukh, a wheat sheaf symbolizing the ancestors of the family,” she said.

After prayer, the blessed prosfora bread is shared, and the family tucks into 12 separate dishes representing either “the 12 Apostles or the 12 months of the year; it goes back so far,” said Prokopovich.

None of the courses include meat or dairy, she said, but kutia – a kind of pudding made form boiled wheat, poppy seeds, honey, nuts and raisins – is “one traditional dish that is absolutely present at every Christmas,” she said, adding that its appealing flavor has earned it the nickname “God’s food.”

The table is set “with a little bit of straw under the cloth to remind us that Jesus was born in a manger,” said Prokopovich, and “there’s always an extra place set” for “the traveler or for the ancestors of the family.”

And even spiders are welcome, she said.

A beloved folktale, a version of which Prokopovich recently recorded, recounts how a struggling spider and an impoverished mother unwittingly helped each other — the mother by taking in the Christmas tree in which the spider and her offspring nested, and the spider by spinning decorations in gratitude. Spider ornaments are placed on Christmas trees to recall the hope and generosity highlighted in the story.

(Related: Listen to Chrystyna Prokopovich of the Ukrainian Heritage Studies Center at Manor College read the story of the Christmas spider.)

With gift-giving concentrated on Dec. 6, the feast of St. Nicholas, Christmas in Ukrainian tradition is “very religious” and “strictly about the birth of Jesus,” said Prokopovich.

Midnight Mass is “the magic hour,” and animals are believed to talk at midnight on Christmas Eve – which is why it’s important to “always make sure to feed them something special,” she said.

Such holiday traditions connect faithful with the eternal reality of Christmas, while keeping them grounded in the present through a hands-on experience, she said.

“You have to practice these (customs) for your children and your grandchildren to remember them,” she said. “If I just tell them about it, that’s interesting, but they might not remember. But if we go through the rituals and we set the table a special way, they will.”

PREVIOUS: Deepen your faith in the new year