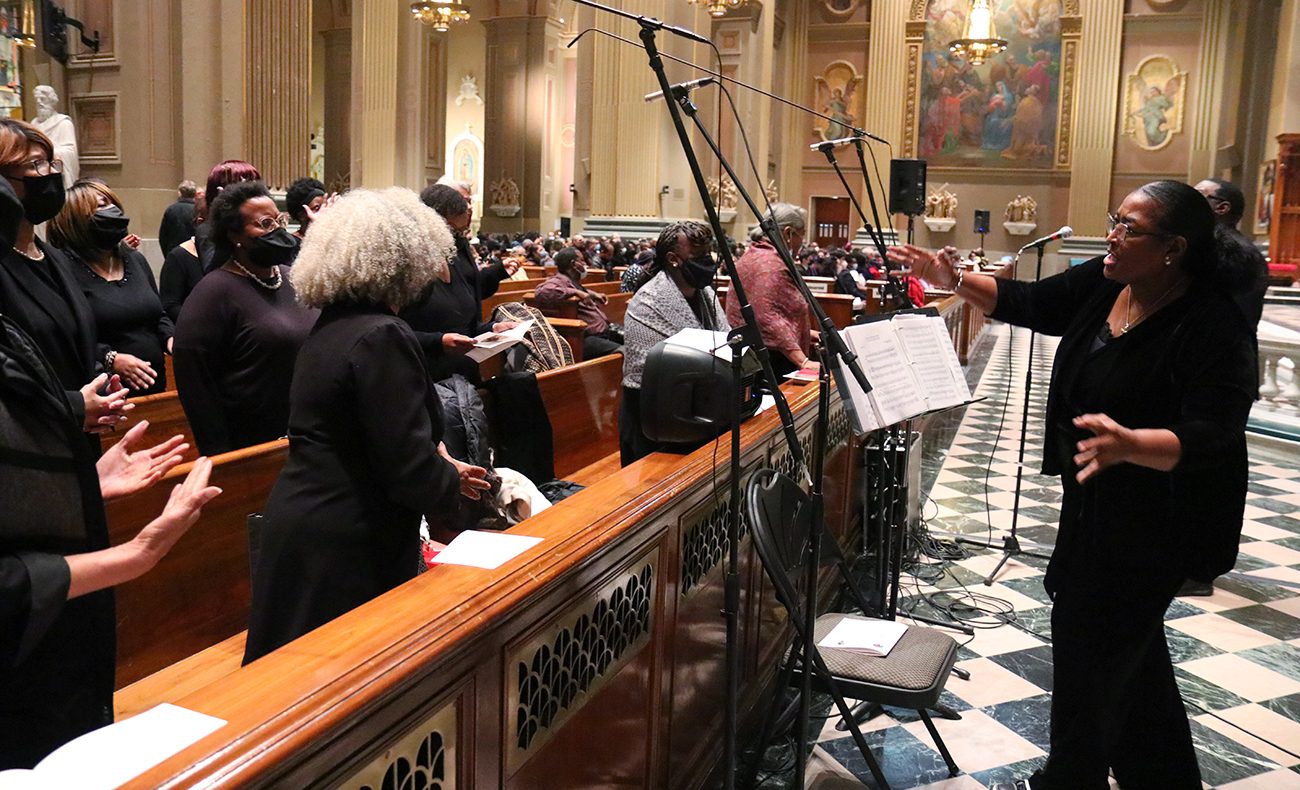 A Philadelphia priest and an archdiocesan ensemble will take the stage for “a Holy Ghost jam” spreading Christmas joy to a troubled world.

Father Stephen Thorne and the Philadelphia Catholic Gospel Mass Choir, directed by Tonya Taylor-Dorsey, will join hundreds of singers, musicians and evangelizers for “A Soulful Christmas” Dec. 14 at 7:30 p.m. in Verizon Hall at the Kimmel Center for Performing Arts.

Now in its eighth year, “A Soulful Christmas” is a large-scale collaboration among community-based choirs, area pastors, praise dancers and instrumentalists for an annual evening of worship and music – all inspired by the cultural heritage of the African diaspora, said the program’s creator and artistic director, Dr. J. Donald Dumpson.

“We bring the African American community into an extraordinary celebration of Christmas,” said Dumpson, minister of music and arts at the Arch Street Presbyterian Church in Philadelphia.

The “very intentional” teamwork among the evening’s many ensembles offers “a message of hope” in a city wracked by “so much division, so much violence,” said Father Thorne, who will offer a short homily prior to the archdiocesan choir’s performance of “Emmanuel” by gospel artist and evangelical Bishop Norman Hutchins, who was honored at the 2019 event.

The song is one of Father Thorne’s favorites, said Taylor-Dorsey.

While pastor of St. Martin de Porres Parish in Philadelphia, where the Philadelphia Catholic Gospel Mass Choir is based, Father Thorne asked if the piece could be added to the liturgical repertoire – year-round, added Taylor-Dorsey.

“Even though it wasn’t Christmas, he would request it for Sunday Mass,” she said.

That’s because the song speaks to a need that transcends time, said Father Thorne.

“Emmanuel, which means ‘God is with us,’ is so needed today,” he said. “Jesus came to save all.”

The concert witnesses to that divine mission, said Dr. Dumpson.

“It transforms the hall into an interdenominational sanctuary,” he said. “Methodists, Baptists, Catholics – all gather together to celebrate in song the good news, and good will toward each other. That’s extremely significant, especially at this time of year.”

The Kimmel Cultural Campus is the perfect setting for such an occasion, said Leslie Tyler, the center’s senior director of media relations and communications.

“Verizon Hall becomes a place where people feel welcomed and loved, and the spirit of the holiday season is celebrated in a very unique way,” she said.

For Taylor-Dorsey – who will make her first appearance on the “Soulful” stage this year — the concert also evokes deeply personal memories: attending the annual performance has been a longstanding tradition for her and her young adult son.

“It was our mother-son date every year,” she recalled, admitting that in his childhood years she resorted to “almost bribing her son with sushi dinners” and dessert at Insomnia Cookies to coax him to join her.

“He would sit there, and I didn’t think he was paying attention – until one year when he said, ‘They did this piece a few years ago,’” said Taylor-Dorsey. “It blew my mind. I thought he was going for the food.”

But it’s impossible to resist what Dumpson called the evening’s “incredible synergy,” which is evident even the rehearsals, said Taylor-Dorsey.

“It truly is church,” she said. “Even though it’s rehearsal, you feel like you’re being ministered to. Sometimes the song will finish, and the choir is so filled with the Holy Spirit that the band will keep playing, and all of a sudden you’re having this praise moment.”

“In the same way that a choir and an orchestra must listen to each other, we have to do some listening,” he said. “This concert is a great moment … to make the world a better place.”

And the “beautiful city” of Philadelphia is where that task rightfully begins, he added.

“God is still in the blessing business,” said Father Thorne. “And he’s above Broad Street.”

For information about and tickets to “A Soulful Christmas,” visit the Kimmel Cultural Campus website.

NEXT: Local donors raise $1.7 million for Catholic causes in archdiocese