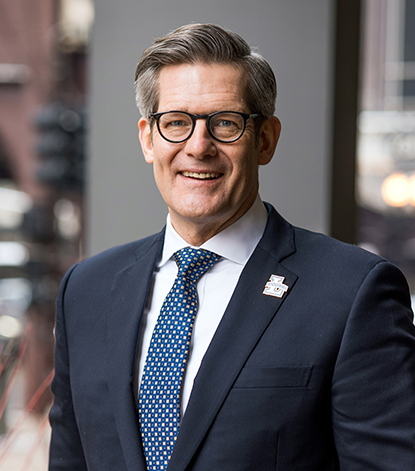 Since 2015 he has been a senior vice president at De Paul University in Chicago — the largest Catholic university by enrollment in the United States — working in advancement and external relations.

He oversaw the most successful fundraising year in the university’s history, raising $93.3 million in 2021 and simultaneously launched a $60 million campaign aimed at support for student scholarships, emergency assistance and mental health and career resources.

“I am ready to lead La Salle University,” said Allen, adding he was “honored and humbled” to be selected by the Board of Directors as the university’s 30th president. “As I moved through this process, it became clear to me that La Salle students embark on their lives and careers with a real-world readiness. Their degree has a return on investment that is among the nation’s strongest, and that is a testament to an excellent and vibrant faculty.

“These have been hallmarks of this history-rich, mission-oriented university for nearly 160 years. I look forward to working with the La Salle community to chart the path forward for the next chapter of the university’s future.”

Allen has deep roots in the Lasallian charism and mission, having previously served four years as vice president of advancement at Lewis University in Romeoville, Illinois. Like La Salle, it is one of the six Lasallian colleges and universities in the U.S.

William W. Matthews III, La Salle class of 1990 and chair of the university’s board, called Allen an “extraordinary leader whose talents and experience equip him well” to lead the university.

“More importantly, he is positioned to shape La Salle’s promising future by addressing our current needs and supporting our students on their paths toward transformational personal and professional outcomes. I have every confidence, as does the Board of Trustees, that Dr. Allen will build upon our impressive foundation and elevate La Salle to significant new heights.”