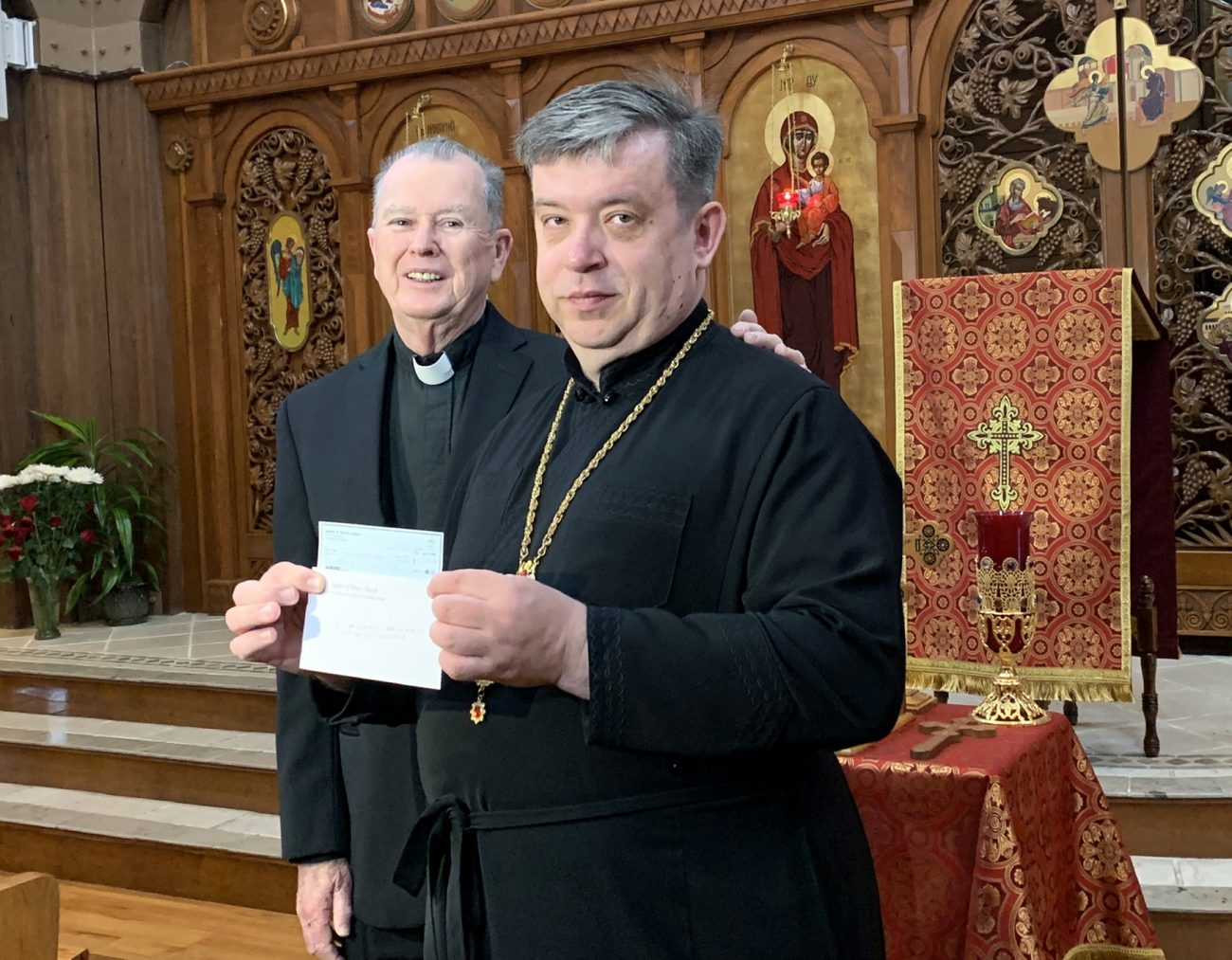 Father Lawrence Crehan, pastor of Queen of Peace (QOP) Parish in Ardsley, presented a check for $1,500 to Auxiliary Bishop Andriy Rabiy of the Ukrainian Catholic Archeparchy of Philadelphia, who also serves as pastor of St. Michael the Archangel Ukrainian Catholic Church in Jenkintown, March 17. The funds, along with an additional $2,100 collected by QOP parishioners, will support St. Michael's efforts to aid a military hospital in Ukraine, now in the fourth week of a full-scale invasion by Russia. (Gina Christian)

Queen of Peace Parish in Ardsley, Montgomery County has raised $3,600 for relief efforts in war-torn Ukraine, hoping to show that “we are all brothers and sisters” in a “common humanity,” said its pastor, Father Lawrence Crehan.

On Thursday, March 17 he presented a check for $1,500 to Auxiliary Bishop Andriy Rabiy of the Ukrainian Catholic Archeparchy of Philadelphia, who also serves as pastor of St. Michael the Archangel Ukrainian Catholic Church in Jenkintown.

Those funds, along with a previous donation by Queen of Peace of $2,100, will enable St. Michael parishioners to purchase and transport medical supplies and equipment destined for a military hospital in Lviv, Ukraine.

Standing with Bishop Rabiy before St. Michael’s iconostas, a screen of icons before the sanctuary in Eastern Catholic churches, Father Crehan said his parishioners began collecting the funds on Ash Wednesday, just days after Russian forces invaded Ukraine following a months-long troop buildup at its borders.

Pregnant women, infants and children are among the thousands of casualties, while more than 3 million Ukrainian refugees have fled to neighboring European Union nations.

“This is not just a political war,” said Father Crehan. “It’s a spiritual war first and foremost for the minds and hearts of people, turning away from darkness into light, into goodness and into common respect and mutual understanding of each other.”

The consequences of the invasion are far-reaching, said Bishop Rabiy, whose parents and brother live in Ukraine.

For parishioners at St. Michael, most of them recent immigrants from Ukraine with family still there, “the war touches them immediately because they have someone who has joined the military or who is there suffering from gunfire and shellings,” he said. “You can see how worried they are. … They come looking for consolation, looking for a way to somehow accept and come to terms with it.”

A combination of sustained prayer and action have enabled them to cope, he said.

“At first, people were very much at a loss … but now I think more and more people have become resolute,” said Bishop Rabiy. “We need to do whatever we can, whether spiritually or practically.”

In addition to attending regular liturgies, his “very much mobilized” flock is now gathering every evening at 7 p.m. for prayer, while hosting Saturday afternoon Ukrainian food sales — the first of which, held last weekend, drew an estimated 2,000 customers.

There’s too much at stake to lose, he stressed.

Nations such as Moldova and Georgia, which each have breakaway regions recognized by Russia, find hope in a Ukrainian victory that would empower them to “actually claim back their own territories,” said Bishop Rabiy.

Like a number of analysts, he feels the war is approaching a turning point at which Ukraine will begin to prevail as Russia “(exhausts) its resources” and international aid continues to flow into the embattled nation.

“The outpouring of support we have been receiving is truly amazing,” Bishop Rabiy said. “People call me up offering some kind of assistance or willingness to come out and help us … because they know how much whatever we do here means to the people in Ukraine. We are all in it together.”

“If just one person does something, that changes the world for (the sake of) goodness,” he said.

NEXT: For Hispanic Catholics, synod listening sessions are a ‘natural’ fit