A study of ‘Christ in Limbo’ 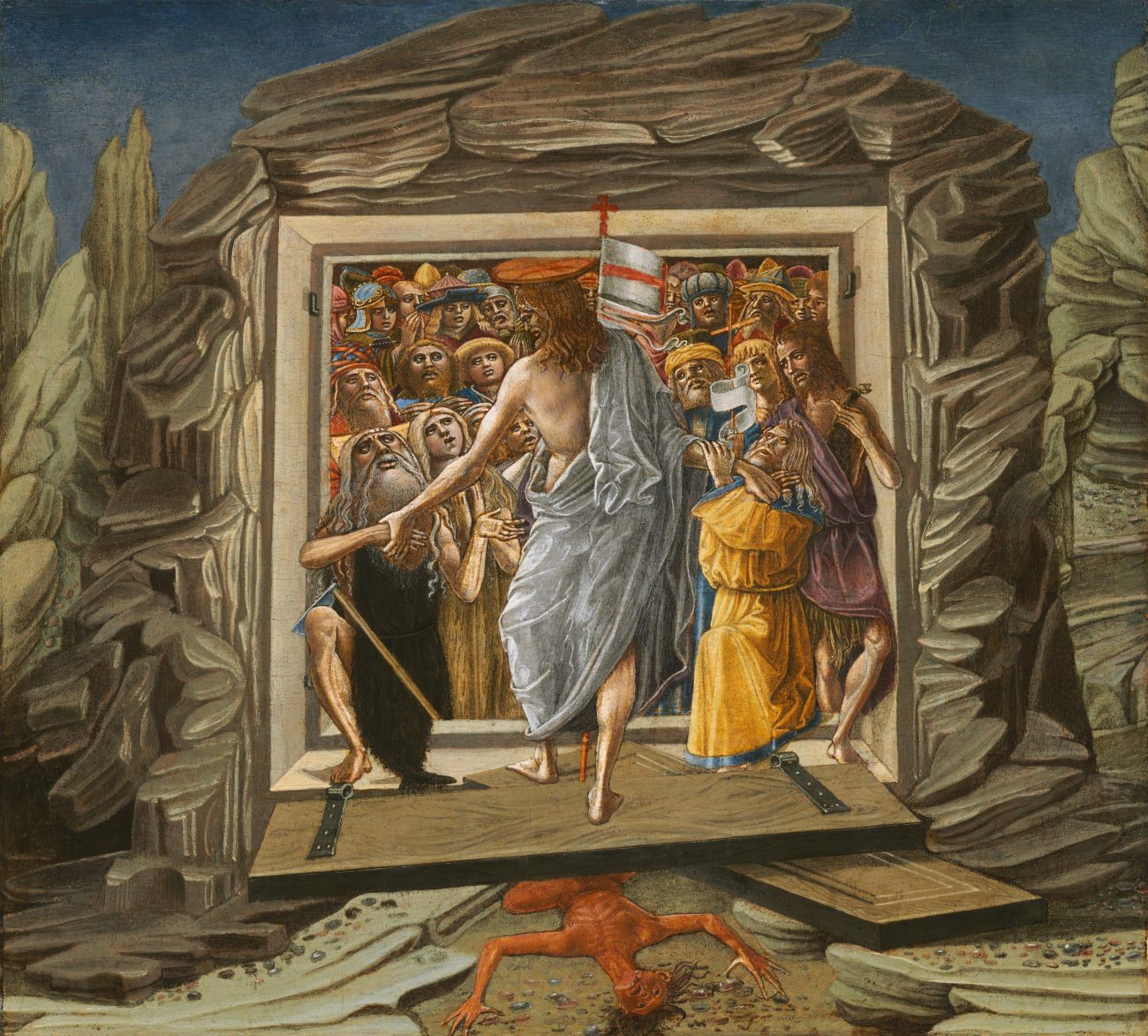 This is a 15th-century painting by Benvenuto di Giovanni titled "Christ in Limbo." (CNS photo/Samuel H. Kress Collection via National Gallery of Art)

Christ stands in an open doorway leading to some sort of liminal space. A portal between this world and another. The heavy wooden door, once concealed within a rock, has been thrust open. Satan lies, squashed underneath.

Within this other world are the faces of many. Huddled together, squished inside. These faces appear forlorn, fatigued, as if they have languished so long, they had begun to wonder if anyone would remember them.

Benvenuto di Giovanni’s painting “Christ in Limbo” captures the split second before these faces realize who is standing before them. Who has come to save them.

The son of a bricklayer, Benvenuto di Giovanni, born in 1436, lived and worked in Siena, Italy, his entire life.

Di Giovanni mainly worked in choral miniatures, pavement designs and frescos and was probably trained in Vecchietta’s Sienese workshop. At age 17 he contributed artwork for the Siena baptistry.

When di Giovanni was 30 he married Jacopa di Tommaso de Cetona. They had seven children and operated a vineyard together. Di Giovanni also served two terms in public office during their marriage. Their son, Girolamo, followed in his father’s footsteps and also became a painter. Girolamo’s work is much influenced by his father’s and is often mistaken for such.

In the early 1480s, di Giovanni was commissioned to contribute art to the Siena Cathedral. The atmosphere was ripe for collaboration and inspiration. It was an exciting time as other artists such as Matteo di Giovanni, Francesco di Giorgio Martini and Neroccio di Bartolomeo de’ Landi worked in the cathedral too. The artists shared ideas, collaborated and peeked around one another’s shoulders as they adorned one of the most beautiful cathedrals in the world.

During this time, di Giovanni’s style shifted tremendously. He began to use more vivid colors and play with light sources in his paintings. Working with other artists improved his ability to manipulate space on the canvas to give a scene more depth. It was a period of intense artistic growth. “Christ in Limbo,” painted in 1491, is from that period of growth.

This painting illustrates the story of Christ’s descent into limbo, a theological concept different from that of purgatory, with which it is often confused. Limbo was a transitory state, where souls of those purified from sin, from before the birth of the Messiah, awaited Christ’s ascension to join him in glory. It was never officially a doctrine of the church.

From limbo, according to useum.org, Christ was said to rescue the pious figures of the Old Testament. Traditionally in limbo scenes, there is a bearded man who represents Adam or, symbolically, the whole of humanity. Here in di Giovanni’s painting Christ holds Adam with his left hand. Eve stands next to Adam.

Another man clings to Christ’s right hand. The viewer is reminded of the thief crucified on the right of Christ who recognized him as the Messiah. “Jesus, remember me when you come into Your kingdom,” the thief had called out. Jesus answered, “Amen, I say to you, today you will be with me in paradise.”

The rich, bright colors inside contrast with the browns and grays of the landscape outside. Christ is painted in full 3D dimensionality, while the others appear flat, as if their faces have been pressed up against the door for an eternity.

The painting is small, about 17 inches by 18 inches. It was most likely placed in a monk’s cell for personal devotion. And now, we too can kneel before the painting and ask God to show us what we need to see.

Where is your eye drawn? Where does this painting take your imagination? Who are you in the painting? If Christ was standing before you, what would you say?

PREVIOUS: Easter offers hope, and we need it more than ever

NEXT: Mourning her dead, Mary awaits the Resurrection in Ukraine