How to live an ordinary life in extraordinary way 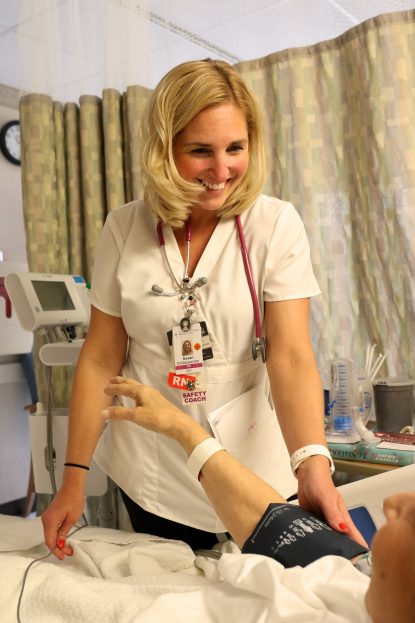 Susan D’Allessandro, a nurse at St. Catherine of Siena Medical Center in Smithtown, N.Y., takes a patient’s blood pressure May 7, 2018. Ordinary gifts that could become extraordinary might include our patience, precious time, kindness or our way of speaking, with its potential to convey respect. (CNS photo/Gregory A. Shemitz)

“Loving others is a spiritual force” that draws people closer to God, Pope Francis wrote in 2013, his papacy’s first year. In this way, he said, “we learn something new about God.”

The pope affirmed in his apostolic exhortation “The Joy of the Gospel” that “when we live out a spirituality of drawing nearer to others and seeking their welfare, our hearts are opened wide to the Lord’s greatest and most beautiful gifts” (No. 272).

Those comments relate directly to the faith renewal that the church’s Lenten season fosters. Not many tend to grow in faith alone. “Living or working alongside others is surely a path of spiritual growth,” the pope observed in his 2018 apostolic exhortation on holiness in our times, “Rejoice and Be Glad” (No. 141).

For great numbers of people, every time of year is an interpersonal time, time spent with family members, friends, neighbors, co-workers, fellow believers. That may mean that faith renewal typically must proceed in an ordinary-life context that encompasses some confusion, a dose of chaos and frustrations of various other kinds.

Given faith’s interpersonal dimension, does it make sense in Lent to ask what it takes to renew and revitalize any defining commitment in life? I am thinking of commitments that tax our time and energies, yet hold the promise of drawing out the best in us.

Since faith renewal is no small matter, a little inspiration regarding ways to proceed couldn’t hurt. Many in our times have turned for such inspiration to Cardinal Francis Xavier Nguyen Van Thuan, a Vietnamese church leader whose faith commitment only deepened under the oppressions of a long imprisonment.

Several days after St. Paul VI named him coadjutor archbishop of Saigon (today Ho Chi Minh City) the city fell to the communist north. He then was arrested and imprisoned. His transfer to Saigon, he indicated, was considered part of a conspiracy involving the Vatican. He told of being in prison 13 years, nine of them in solitary confinement.

It is what he decided to make of his time in prison that captures the attention of so many. His words quietly challenge others to consider ways of doing in their own lives what he strove to do during his long prison years.

Cardinal Van Thuan determined that his “captivity would not be merely a time of resignation, but a turning point.” He would “live the present moment and fill it with love.”

His intention was to speak “one language” and wear “one uniform,” the language and uniform of love. He famously befriended some prison guards. “After all, they were my brothers,” he said.

Two guards clandestinely aided his fashioning of a small pectoral cross of wood and wire that the archbishop kept long after his 1988 release from prison, even after becoming president of the Pontifical Council for Justice and Peace in Rome. Though allowed to visit Rome in 1991, Vietnam would not allow his return home.

Pope Francis singled out Cardinal Van Thuan in “Christ Is Alive,” a 2019 apostolic exhortation. The pope noted how, despite the cardinal’s imprisonment, he was determined to “seize the occasions that present themselves every day” and to “accomplish ordinary actions in an extraordinary way” (No. 148).

Those are the precise words that so many find inspiring. What ordinary actions in anyone’s life can be accomplished in extraordinary ways?

One notable Lenten reality is that the best-laid plans for faith renewal so easily disappear into the fog created as time rushes by. Other pressing duties reemerge, and soon Lent ends.

Fortunately, renewal is not reserved to Lent’s 40 days. Any day is a time for faith renewal.

Does faith’s interpersonal dimension suggest that its growth might be jump-started by eyes wide open and ears perked up to see others clearly and hear better what they may have been trying to tell us for a long time?

Sometimes the challenges that arise for us seem mind-boggling, other times not so much. Pope Francis talked about this in “Rejoice and Be Glad,” saying:

“At times, life presents great challenges. Through them, the Lord calls us anew to a conversion.” However, “other times we need only find a more perfect way of doing what we are already doing” (No. 17).

I recall St. Teresa of Kolkata saying that when she had nothing to give to someone, she gave her smile. Is a smile an ordinary action that can become extraordinary?

Other ordinary gifts that could become extraordinary might include our patience, precious time, kindness or our way of speaking, with its potential to convey respect.

There is also the possible gift of noticing the goodness in someone else that, for whatever reasons, was lost from sight and mind too many weeks or months or years ago.

NEXT: A Lenten exercise: Crack the case of ‘Mrs. Zebedee’