Pope asks Mary to end war in Ukraine and everywhere 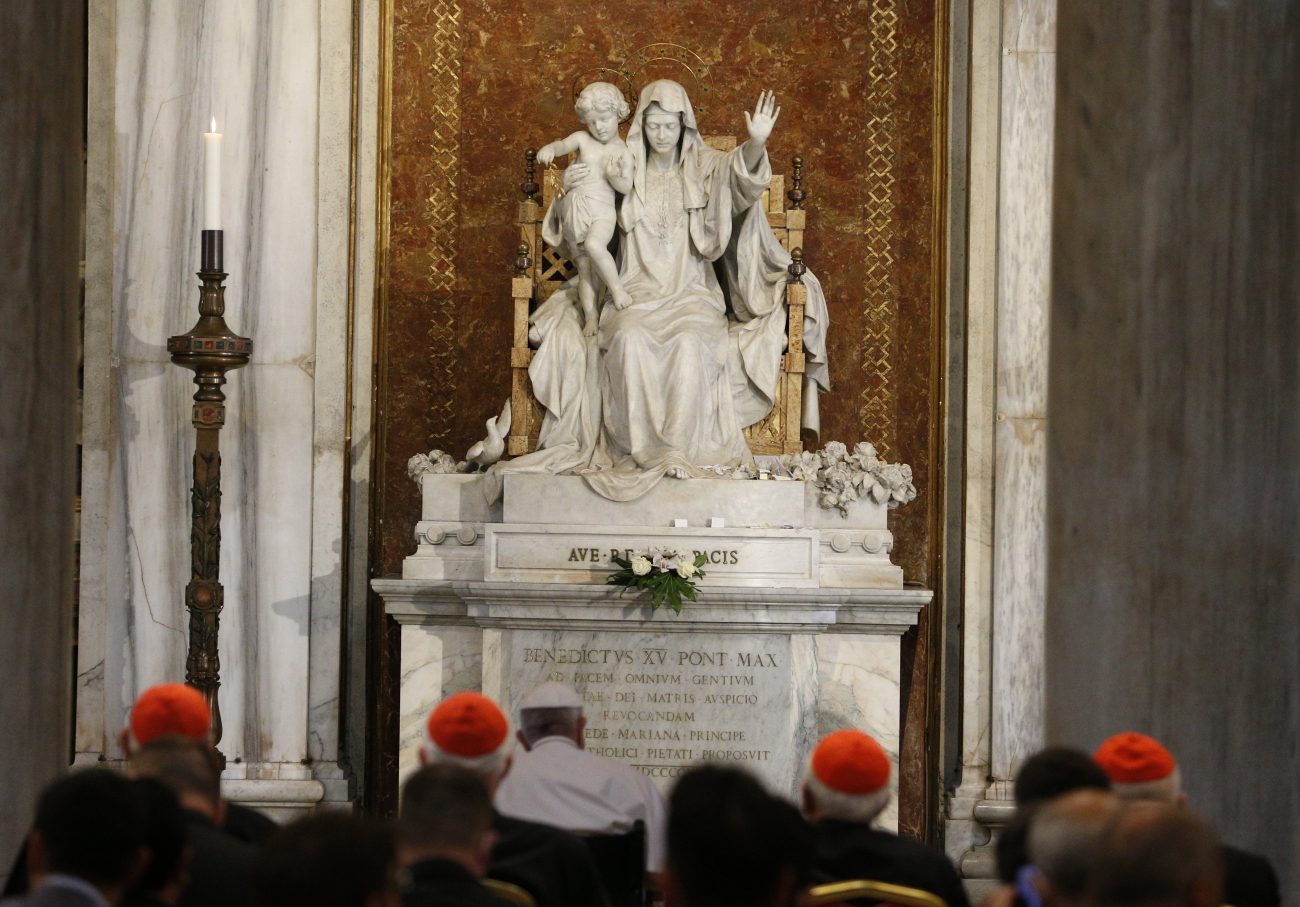 Pope Francis prays in front of the statue of Mary, Queen of Peace, May 31, 2022, as he leads the rosary for peace in the Basilica of St. Mary Major in Rome. (CNS photo/Paul Haring)

ROME (CNS) — After setting white flowers at a statue of Mary, Queen of Peace, Pope Francis prayed the rosary and asked Mary to intercede to bring peace to Ukraine and to every place in the world torn by violent conflict.

Pope Francis usually ends the month of May, traditionally dedicated to Mary, by leading the recitation of the rosary at the Vatican. But given Russia’s ongoing war on Ukraine, he chose to go to Rome’s Basilica of St. Mary Major and the statue Pope Benedict XV had placed there in 1918 as a sign of people’s prayers that Mary would intercede to end World War I.

Introducing the prayer May 31, the feast of the Visitation, the pope reminded Mary that last year in the Vatican Gardens, he had asked her help in ending the COVID-19 pandemic, giving strength to the sick and the medical personnel caring for them, giving comfort to the dying and drying the tears of those in mourning.

“This evening, at the end of the month especially consecrated to you, we are again before you, Queen of Peace,” the pope said.

“Grant us the great gift of peace; quickly end the wars, which have been raging for decades now in various parts of the world, and which has now invaded even the continent of Europe,” the pope prayed. “We are aware that peace cannot be the result of negotiations alone nor a consequence of political agreements alone but is above all an Easter gift of the Holy Spirit.”

With dozens of people in the basilica wearing blue and yellow scarves — the colors of the Ukrainian flag — Pope Francis also noted that on March 25, the feast of the Annunciation, he and bishops around the world consecrated Ukraine, Russia and all humanity to the immaculate heart of Mary, asking for “the great gift of the conversion of hearts.”

“We are certain that with the weapons of prayer, fasting, almsgiving, and the gift of your grace, human hearts and the fortunes of the whole world can be changed,” he said, again addressing Mary. 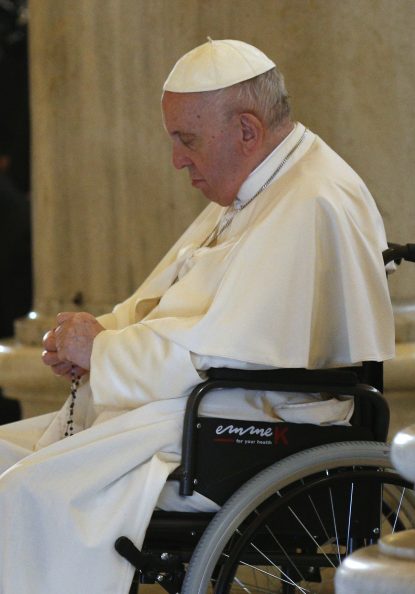 Pope Francis closes prays the rosary for peace in Ukraine and around the world May 31, 2022, at the Basilica of St. Mary Major in Rome. (CNS photo/Paul Haring)

“Intercede for us with your son,” he prayed. “Reconcile hearts full of violence and vendetta, correct thoughts overcome by the desire for easy enrichment and make your lasting peace reign over all the earth.”

A video monitor showing the connection with the 15 churches was placed on the floor by the pope, who stayed in his wheelchair throughout the service.

Each decade was preceded by the reading of a Scripture passage and a prayer intention: for the victims of war and for families forced to flee; for priests, religious and all others to bring a word of comfort to those suffering the effects of war; for doctors and volunteers who deliver humanitarian aid and for those who welcome refugees into their homes; for the dying, for victims of torture or rape and for the missing; and, finally, that through the death and resurrection of Jesus, all wars will cease and peace will reign.

The statue of Mary, Queen of Peace, is a place Romans leave small notes with their prayer intentions. After the service, the pope did likewise, leaving a handwritten note — dated and signed — that said, “Mother, please, I ask for the holiness of the clergy.”

PREVIOUS: Readings of the Holy Mass – Seventh Sunday of Easter

NEXT: The value of doubt in a life of faith