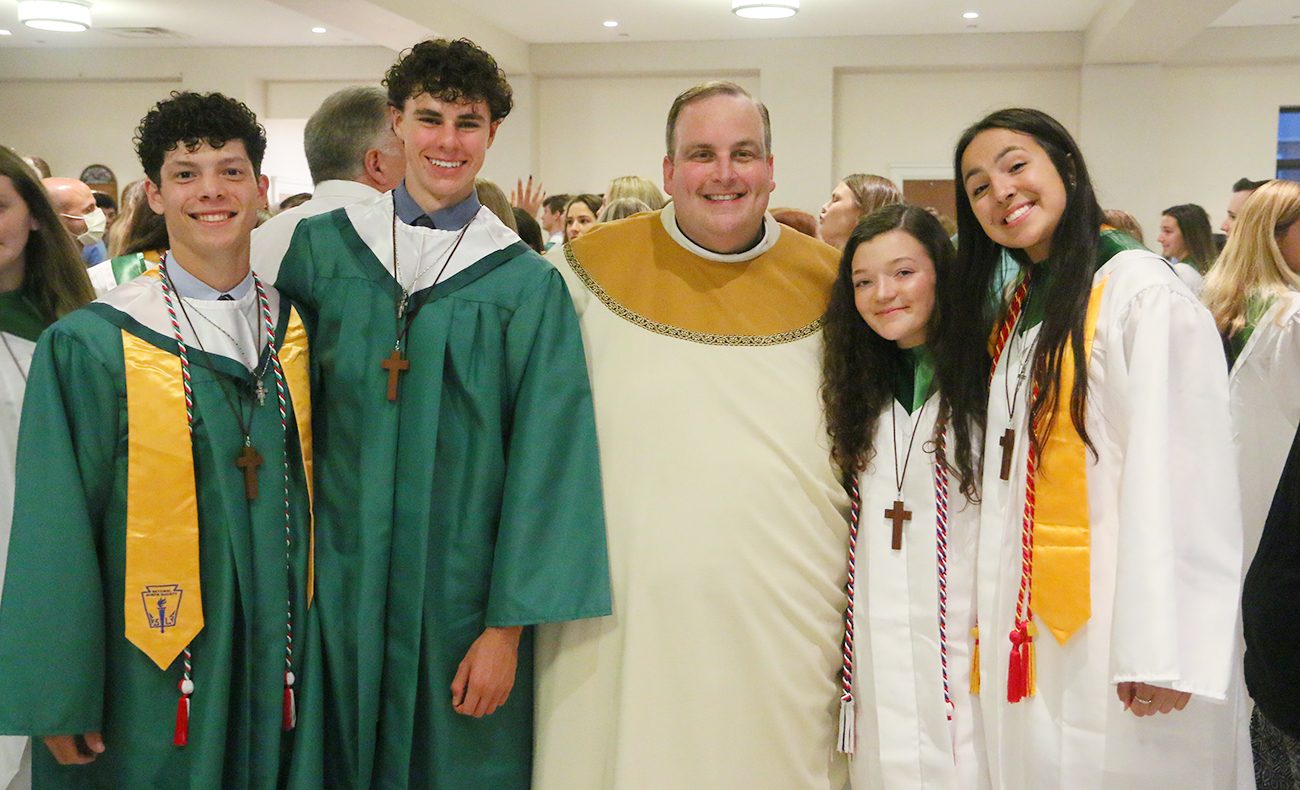 Father John Donia, center, spends a moment after a June 2021 Mass with Bishop Shanahan seniors. Father Donia was named president of the school effective June 8, having served as both principal and campus minister. (Sarah Webb)

A Philadelphia priest with “an enthusiastic commitment to Catholic education” has been selected to head up Bishop Shanahan High School in Downingtown, said archdiocesan officials.

Father John E. Donia has been appointed the school’s president by Archbishop Nelson Pérez, according to a June 8 announcement from the archdiocesan Office for Catholic Education (OCE).

In 2015, Father Donia was named Bishop Shanahan’s school minister, and in March, he succeeded Immaculate Heart of Mary Sister Regina Plunkett as principal.

“He truly embodies the school’s mission of nurturing young adults to be ‘people of God, people for others,’” said the announcement, quoting the school’s motto.

In addition, Father Donia “has demonstrated his commitment to Bishop Shanahan’s academic excellence and global solidarity,” said archdiocesan officials in their letter to the school community.

Previously, he served as a school minister and theology instructor at Archbishop Ryan High School, and as an adjunct professor in La Salle University’s bilingual undergraduate studies program.

Ordained in 2007, Father Donia holds several degrees from St. Charles Borromeo Seminary, including a Bachelor of Arts in Philosophy, a Master of Divinity and a Master of Arts in Theology.

A Maguire Fellow, Father Donia completed his Master of Science degree in Educational Leadership at St. Joseph’s University, obtaining his principal’s certification in 2018.

His previous pastoral appointments include parochial vicar of St. Timothy Parish and parochial administrator at Holy Name of Jesus, both in Philadelphia.

Given his education and experience, Father Donia is “well prepared to lead Bishop Shanahan administrators, faculty, staff and school families as they write they next chapter of the school’s history,” said OCE administrators.

In a message on the school’s website, Father Donia said he can “promise” that “Bishop Shanahan High School is a great place to be a 14-18 year old human being.”

PREVIOUS: Novena for Ukraine unites faithful from Philly and afar

NEXT: Nigerian church massacre ‘an attack on all Catholics,’ say local leaders