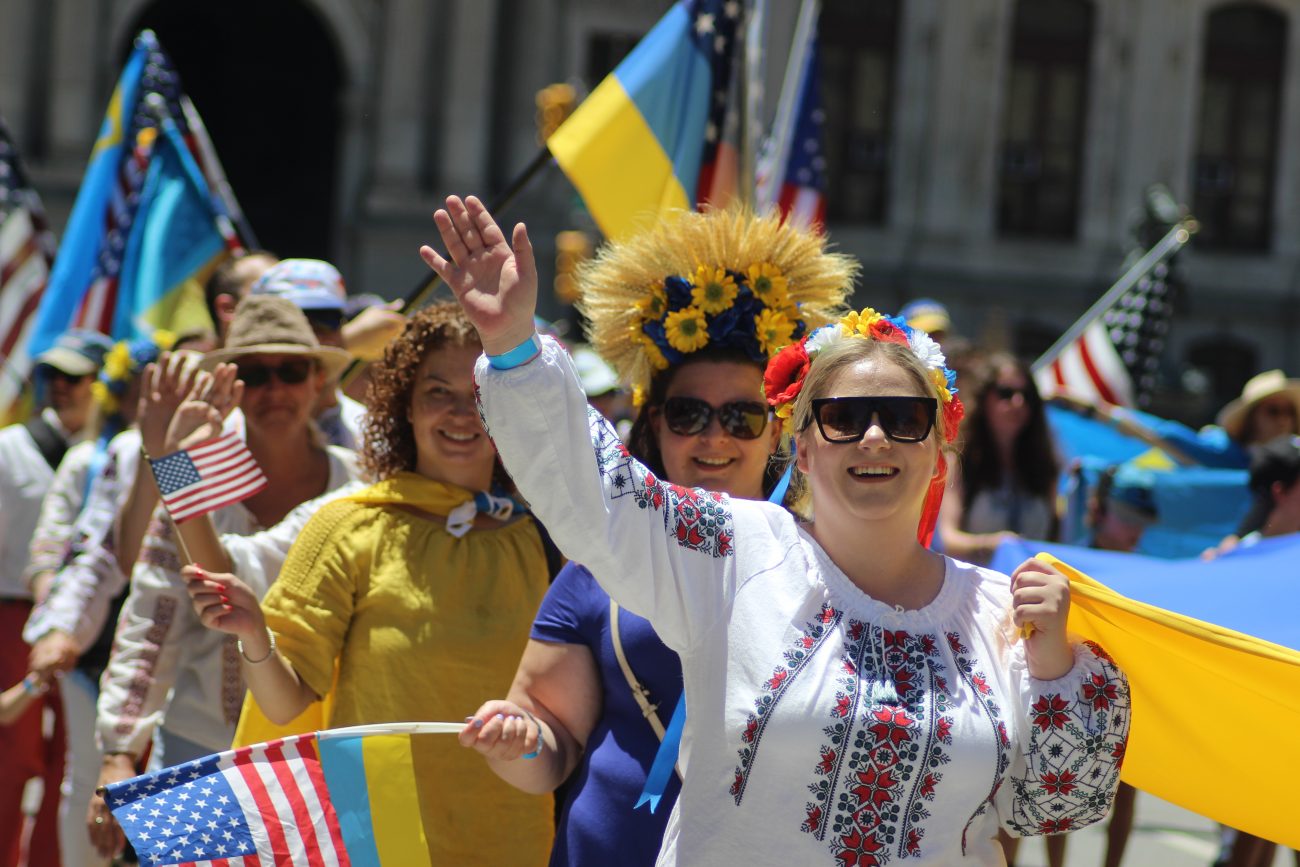 Members of the area's Ukrainian community marched in Philadelphia's Fourth of July parade, to the cheers of attendees along the route. (Gina Christian)

Members of the local Ukrainian Catholic community marched for the first time in Philadelphia’s Fourth of July parade earlier today, as part of what one priest called “a big ‘thank you’” for U.S. support of Ukraine amid a brutal invasion by Russia.

“For me, it’s a pleasure to be a part of this event,” said Father Ostap Mykytchyn, assistant priest at St. Michael the Archangel Ukrainian Catholic Church in Jenkintown. “American aid to Ukraine is, I think, now the biggest in the whole world. It’s a good chance to say thank you.”

Father Mykytchyn joined dozens of fellow Ukrainians of all ages in walking the mile-long route along Market Street, with participants wearing traditional (and highly symbolic) Ukrainian attire such as vyshyvanka, embroidered shirts and dresses, and vinoks, flowered headdresses. 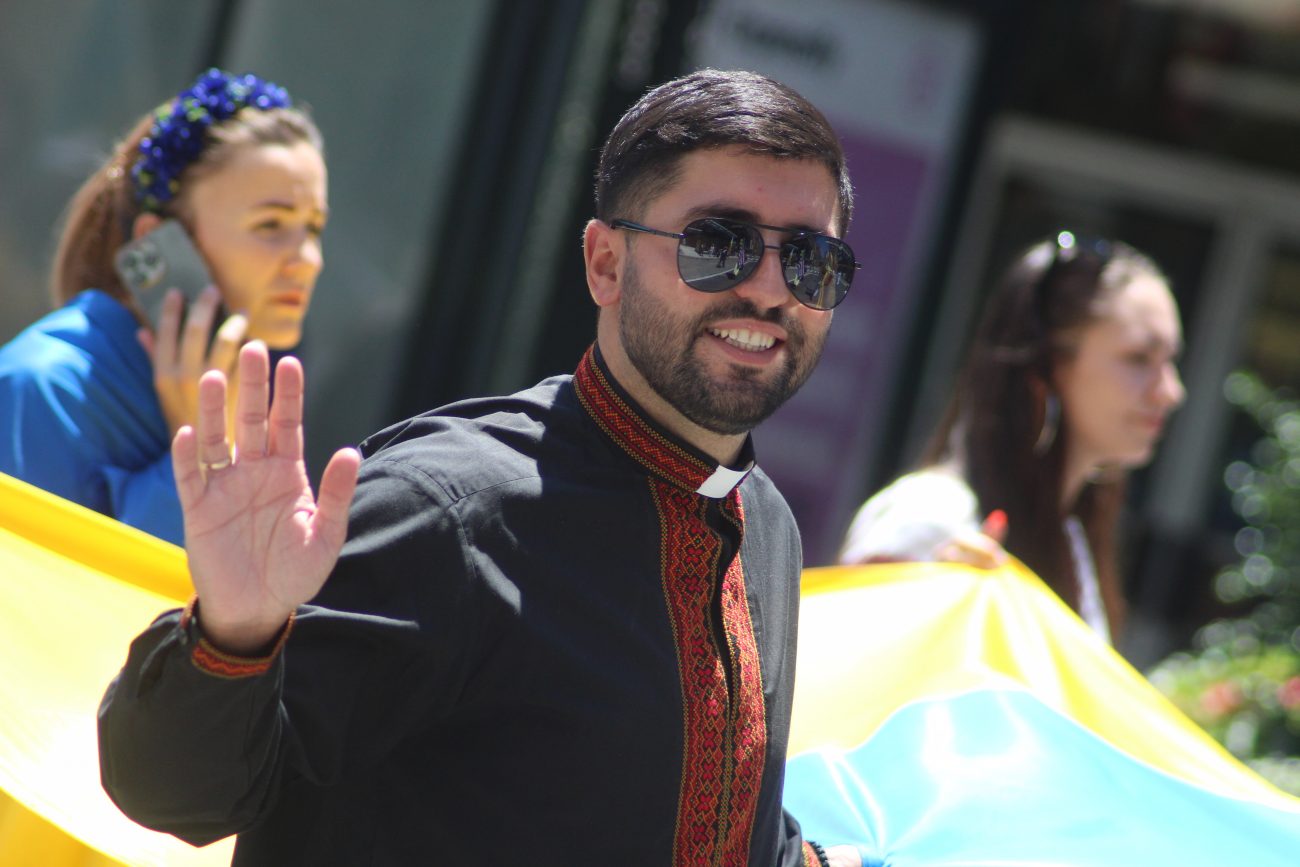 St. Michael the Archangel parishioner Andriy Kulynin, who works to promote awareness of and appreciation for Ukrainian culture, headed up the contingent bearing a large Ukrainian flag.

Also on hand were members of Ukrainian American Veterans Post 1, while some 20 fellow participants carried an extended banner version of the Ukrainian flag.

Parade watchers broke into applause as the group made its way along Market Street, with a number of attendees calling out “Slava Ukraini” (“Glory to Ukraine”).

One audience member added, “Lithuania is with you!”

The cheer was underscored by the presence of that country’s prime minister, Ingrida Šimonytė, at the July 4-5 Ukraine Recovery Conference in Lugano, Switzerland.

In May, Lithuanians crowdfunded $6.2 million to purchase a Bayraktar attack drone for Ukraine. Impressed by the campaign, the Turkish manufacturer donated the craft and requested the funds be used for humanitarian aid to Ukraine.

All forms of support remain critically needed, said Father Mykytchyn, whose parish has been gathering donations and preparing medical supplies for Ukraine.

“The war is still continuing,” he said.

Russia’s Feb. 24 invasion – which extends assaults launched in 2014, with the attempted annexation of Crimea and the backing of separatist regions in Donetsk and Luhansk – has now been declared a violation of the 1948 Genocide Convention by New Lines Institute, the Raoul Wallenberg Centre for Human Rights, and Ukraine itself, which has filed charges of genocide by Russia with the International Court of Justice.

Among the atrocities cited by global leaders is Russia’s blockade of Ukrainian ports, trapping millions of tons of wheat and other cereal grains. With Ukraine as a major global supplier of grain and cooking oils, an estimated 44 million in 38 countries are now at risk of starvation.

Announcing the parade details after a July 3 Divine Liturgy (Mass), Father Roman Pitula, rector of the Ukrainian Catholic Cathedral of the Immaculate Conception in Philadelphia, said the U.S. remains “an example of democracy, of liberty and of Christian values.”

He urged faithful to sustain their “prayerful assistance” as well as “financial, humanitarian and military” aid.

“Support our soldiers in Ukraine as they fight for independence,” said Father Pitula. “May God bless Ukraine, may God bless America, and may God bless all of us who live in a free country, that we may be grateful for this.” 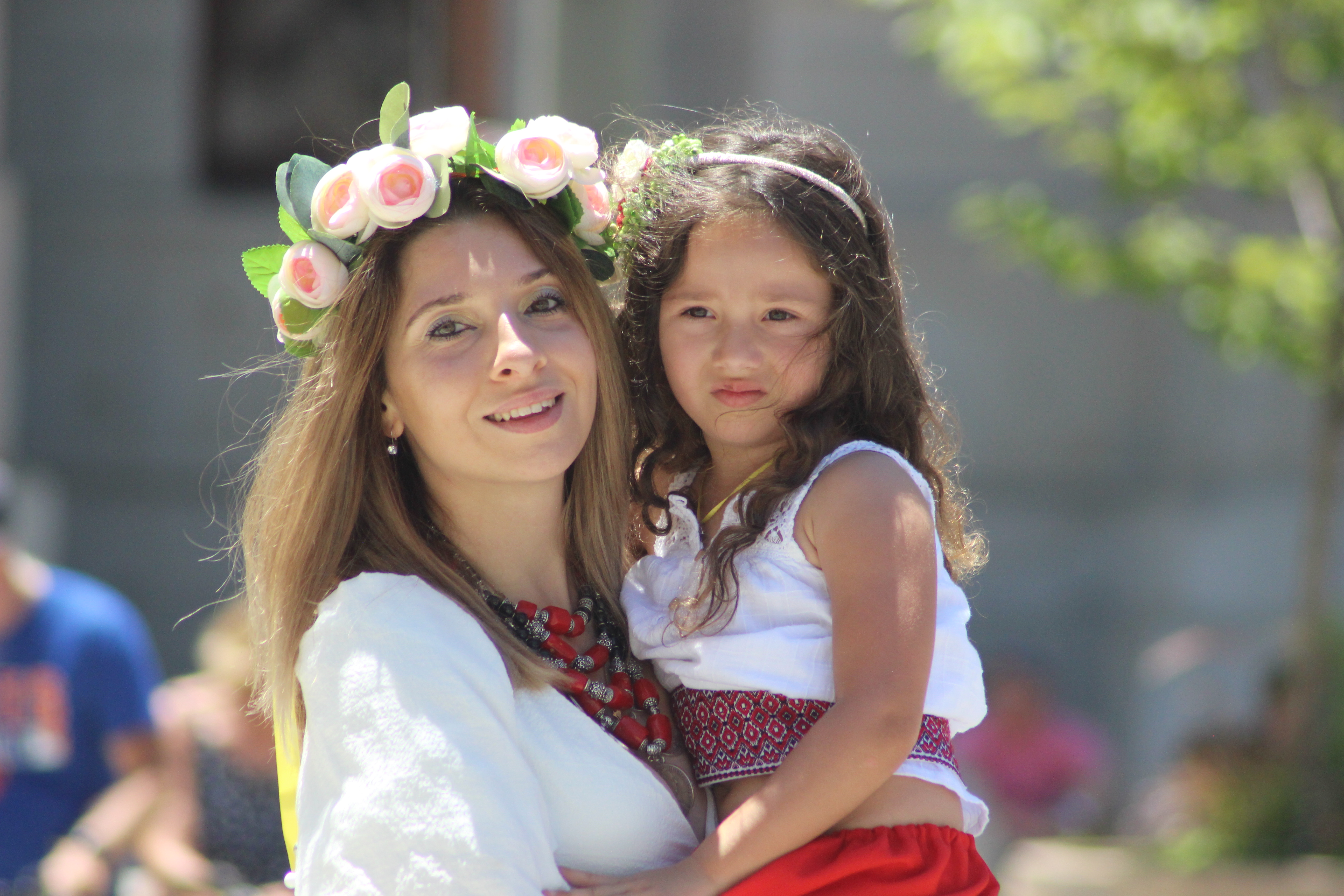 A mother and child, dressed in traditional Ukrainian attire, pause after marching in Philadelphia’s Fourth of July parade. (Gina Christian)