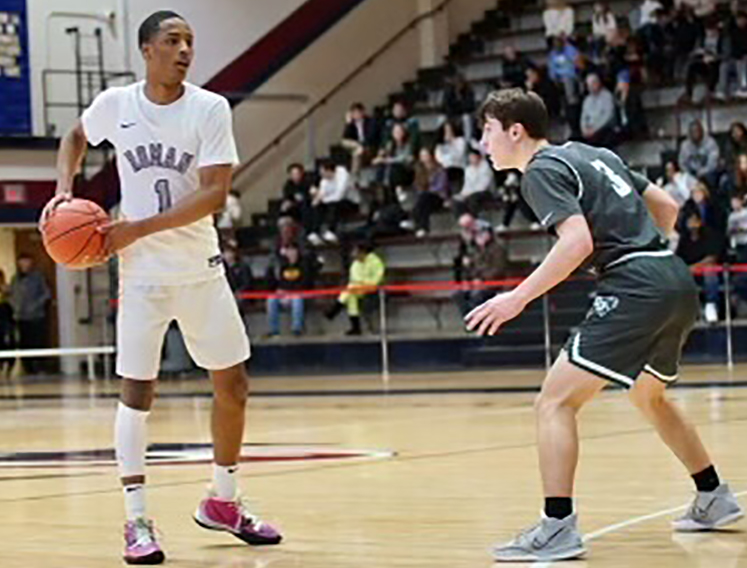 Xzayvier Brown (left) in action on the basketball court. (Courtesy of Chris Kleinkurt)

If Xzayvier Brown had a dollar for every time his first name was either misspelled or mispronounced, he’d be in a different financial bracket.

Must be annoying though, right?

Off the basketball court, the Roman Catholic senior possesses a terrific sense of humor. On the court, he’s all business.

After significant research, counsel, and discernment, the 6-foot, 2-inch point guard decided to take his copious basketball skills to St. Joseph’s University. The lifelong Philadelphian could not be more excited.

Given the steady stress of determining where he will spend the next four years of his life, the affable gentleman has finally acquired inner peace.

“I felt a sense of relief,” said Brown. “It felt good to commit to a school and not have to worry about college for a couple months. It definitely felt relieving.”

Being named a first-team All-Catholic and a first-team PIAA Class 6A all-state selection this past season highlighted Brown’s plentiful scholastic accomplishments. According to stat guru Ed “Huck” Palmer, Brown contributed 14 points, 4.7 rebounds, 6.2 assists, and 2.9 steals per game while shooting 54.2 percent from the field and 84.2 on free throws this season after averaging 10.1 points, 6.9 assists, and 4.2 rebounds, and 2.8 steals as a second-team All-Catholic junior.

“I think playing at Roman has helped me as a player tremendously,” said Brown. “My freshman year, the opportunity to play with three professional talent players was great for my growth. Competing with those guys in practice and then a national schedule playing great competition has helped me.

“The last two years have helped me from kind of being the leader on the team and being expected to play well every game. Also the coaches have helped me develop as a better player at every aspect.”

After playing under former coach Matt Griffin, a St. Joseph’s Prep grad who is now assistant coach at Florida Gulf Coast University, Brown was guided by current coach Chris McNesby this past year. McNesby had previously coached the Cahillites from 2009 through 2016, winning two PCL crowns.

“I’m very happy for ‘X’ and his family,” said McNesby. “St Joe’s is getting a floor general, leader, and just a tremendous young man.”

“Knowing him since we were actually kids, we just clicked so well,” said Quadir. “He is such a great teammate. I know guys will say that, but he really is. He makes sure that all of his teammates are always good, and always understood what the task at hand is, and in practice just as much as the actual game, he takes it very, very seriously.

“I’ve watch him take the responsibility and make an amazing leap to become an amazing leader from his sophomore to junior year. He would be one of the first guys there and the last one to leave. He’s about winning, and he wants to do it the right way.

“He plays at “X pace” as I’ve heard so many times,” added Brown, snickering at the intended pun. “He controls the game like a pro, and I could not ask for a better point guard, teammate, or brother.”

Xzayvier Brown explained why he chose Hawk Hill among numerous Division I suitors.

“Saint Joe’s felt like home and I had a great relationship with everybody,” he said. “The staff valued me as a person and a player, and I really appreciated that. I think I have a good opportunity and good situation to play well and also be a better person.

“I don’t know what I’m going to major in yet but when I’m done basketball, I want to be a coach or an athletic director, so I’ve been looking at sports management. But I don’t know yet.”

For those numerous standout athletes now in the throes of college commitment angst, Brown offered some perspective.

“Just be appreciative because it’s definitely a lot of people who are fighting for scholarships, so the fact that you can choose which scholarship you want to take is definitely a blessing,” he said. “Also, don’t get caught up in scholarships, too. I mean, it’s great to have them and we all want to go to college, but just continue playing the sport out of the fun of it and everything else will take care of itself.”