Sister Dolores Donovan, OSF, (formerly Sister Redempta) 91, died in Assisi House in Aston on August 5, 2022. She had been a professed member of the Sisters of St. Francis of Philadelphia for 69 years. Sister Dolores 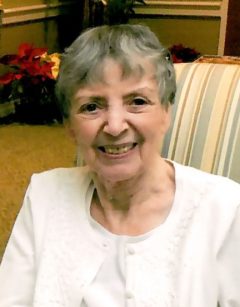 was born in Philadelphia, where she was a member of Holy Cross Parish in Springfield and a graduate of West Catholic High School. She entered the congregation in 1950 and professed her first vows in 1953. She earned her bachelor’s degree in education from Marylhurst College, a master’s in English from Villanova University, and a master’s in spiritual direction from the Jesuit School of Theology. Sister Dolores ministered primarily in education and pastoral services.

Sister Dolores served for 55 years in the Archdiocese of Philadelphia, where she taught at St. Hubert High School, Cardinal O’Hara High School, and St. Maria Goretti High School. She served as a pastoral visitor at St. Agnes Hospital and in pastoral services and parish ministry at St. Rita Parish and St. Elizabeth Parish in Philadelphia; Our Lady of Mount Carmel, Doylestown; and St. John the Evangelist Church in Lower Makefield. She also spent two years in the Cordum Office for the Archdiocese of Philadelphia and 14 years as a caregiver in Morrisville. Since 2017, she served in prayer and hospitality ministry in Assisi House, where she lived at the time of her death.

Sister Dolores spent four years in the Diocese of Portland, Oregon, as a teacher at St. John Fisher School. Additional ministry on the West Coast included three years in the Baker Diocese, as a teacher at both St. Andrew Indian Mission and St. Joseph Academy, Pendleton, and one year in the San Bernadino Diocese at St. Edward School, Corona.

She also spent four years teaching at McCorriston High School in the Diocese of Trenton.

All services will be held in Assisi House, 600 Red Hill Road, Aston, Pennsylvania, on Thursday, August 11, and will be private. The services will be livestreamed for friends and family. A Christian Wake Service will be held at 9:30 A.M. followed by viewing. Mass of Christian Burial will be at 11 A.M. Burial will be in Our Lady of Angels Cemetery in Aston. Sister Dolores is survived by her two nephews, Henry Roth and Robert Roth, and their families and by her Franciscan family. Donations in her name can be made to the Sisters of St. Francis Foundation, 609 S. Convent Road, Aston, PA 19014.