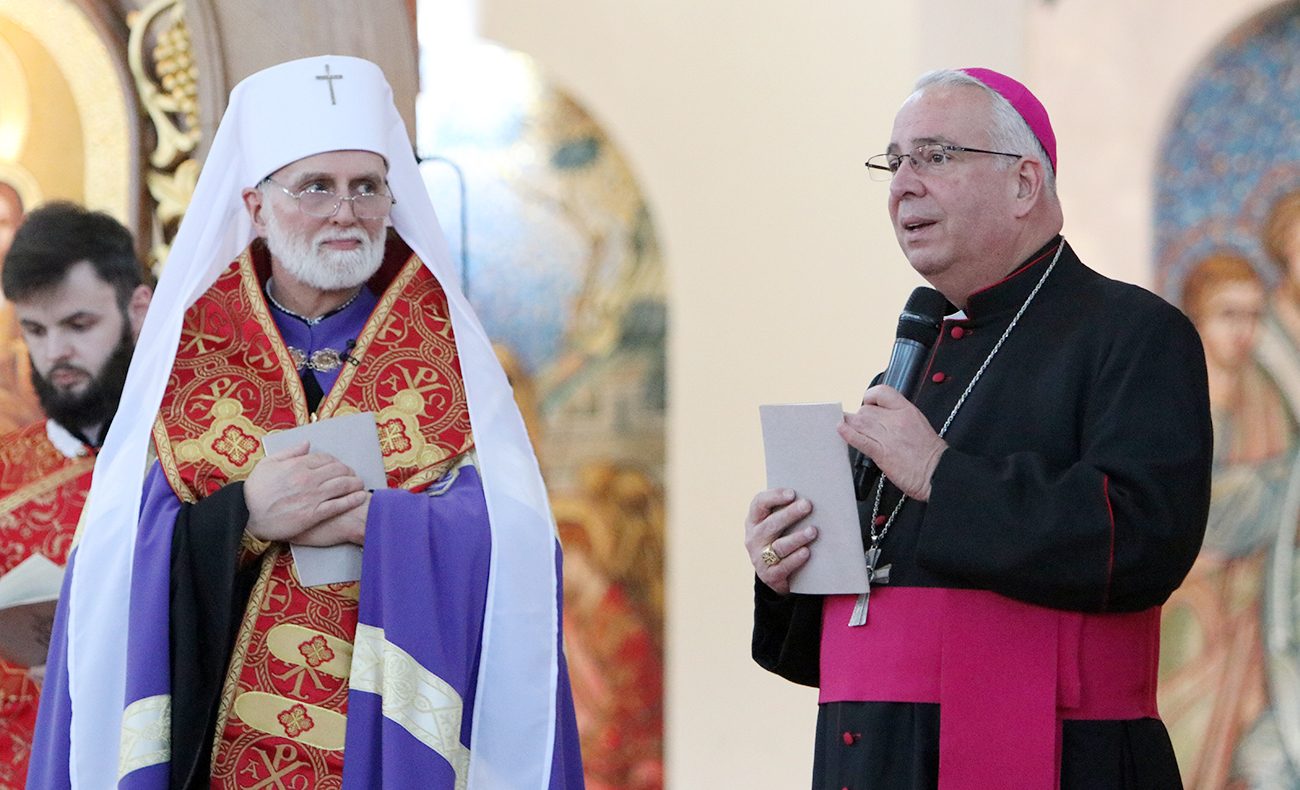 Archbishop Nelson Perez, right, participates in a Divine Liturgy March 1, 2022 at the Ukrainian Catholic Cathedral of the Immaculate Conception in Philadelphia with Archbishop Gudziak. (Sarah Webb)

Archbishop Nelson Pérez will be the guest of honor at an event rallying support for Ukrainian Catholics, both here and in Ukraine.

The archbishop will join Metropolitan Archbishop Borys Gudziak of the Ukrainian Catholic Archeparchy of Philadelphia at a benefit luncheon taking place Oct. 9 at the Ukrainian Education and Cultural Center, located at 700 North Cedar Road in Jenkintown.

Attendees will learn of ongoing efforts to help the Archeparchy and those in Ukraine, now in the eighth month of a brutal invasion by Russia that has been declared a genocide by human rights experts. Proceeds from the luncheon will support the Archeparchy and its humanitarian fund, which has so far raised over $5.4 million to aid Catholic churches and ministries in Ukraine.

Guests will receive an update on those efforts from Archbishop Gudziak, while Msgr. Ronald Popivchak, pastor of SS. Peter and Paul Ukrainian Catholic Church in Bridgeport, will be honored with the Metropolitan’s Service Award for his long years of service to the Archeparchy.

“I am honored to attend this benefit luncheon and am deeply grateful to my Ukrainian sisters and brothers for their Christian witness and friendship,” said Archbishop Pérez. “Their strength and resiliency, especially in the midst of the war, truly inspires me. 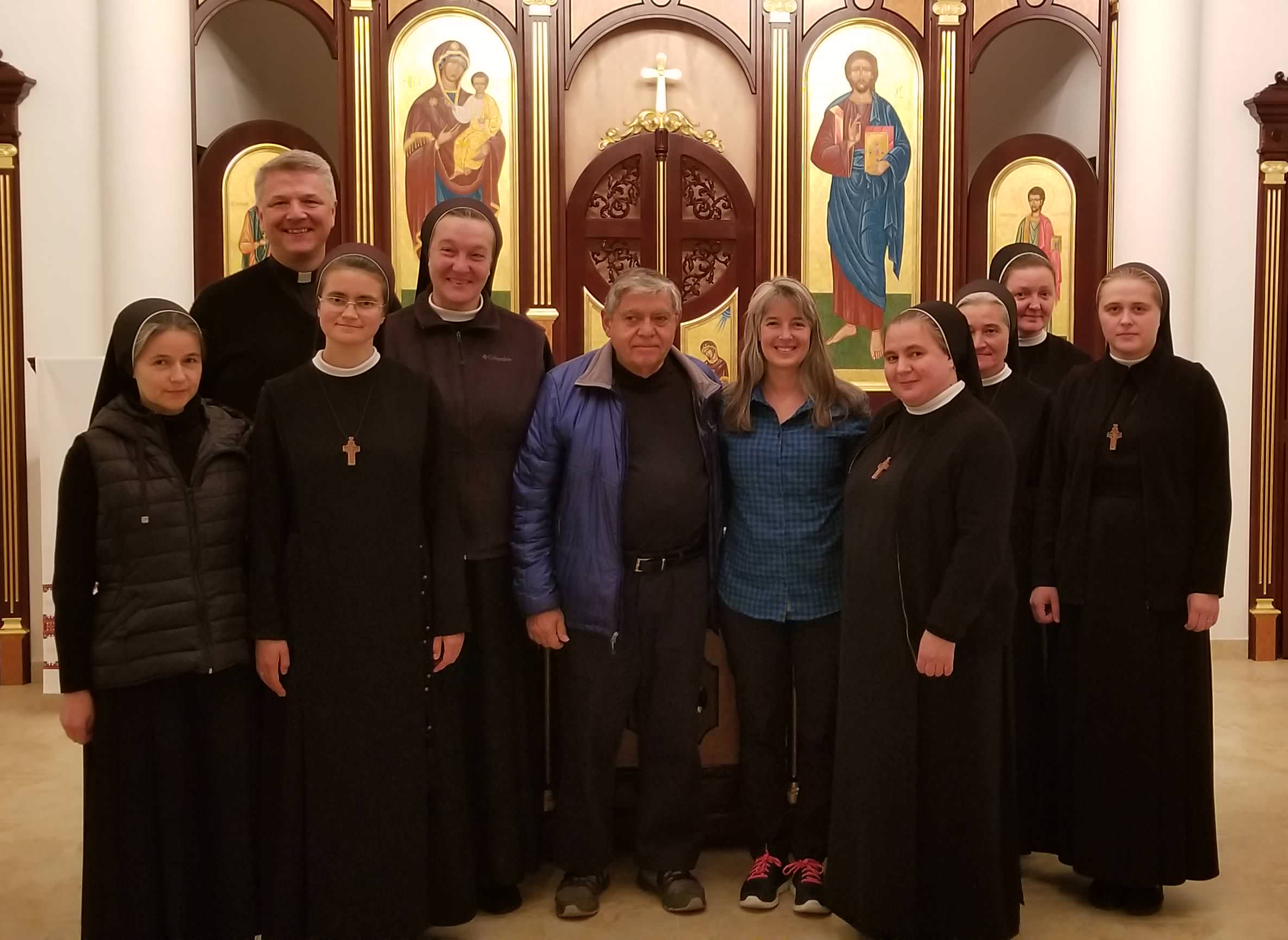 The archbishop added the gathering “provides an opportunity for all people of goodwill to be a beacon of hope by supporting humanitarian efforts for Ukraine and her people as they continue to suffer devastating hardships.”

Since Russia launched its full-scale invasion of Ukraine Feb. 24, the archdiocese and the archeparchy have collaborated on a number of liturgies, prayer gatherings and relief efforts.

Such interactions deepen a sense of faith-based solidarity, said Dr. Tammy Tenaglia, who with her husband Dr. Nicholas Tenaglia – parishioners of St. Philip Neri in Lafayette Hill — plans to attend the luncheon.

In 2018, the couple traveled extensively on a pilgrimage throughout Ukraine, meeting clergy, religious and lay faithful who explained the Ukrainian Greek Catholic Church’s long history of persecution by Russia under tsarist, communist and post-communist regimes.

“I think what’s really important to know and what truly is amazing about the Ukrainian Greek Catholic Church is that it lived in the underground” while repressed, she said.

One nun described to the couple how as a child she and fellow classmates had been asked by government officials to fill out forms asking if they prayed or displayed icons in their homes.

“Her teacher showed up that night and advised her parents, ‘You’d better teach your daughter how to lie,’” said Tenaglia.

She encouraged fellow Roman Catholics to participate in the luncheon, and to consider attending Divine Liturgy (Mass) at a Ukrainian Catholic parish.

“Some people think it’s just for Ukrainians, but that celebration, the Divine Liturgy of St. John Chrysostom, is ever ancient, ever new,” she said. “It’s not for Ukraine only, but for all the church.”

She noted the need for all Catholics to support Ukraine in a spirit of faith and fellowship.

“If one suffers, all suffer; and if one is honored, all are honored,” she said, quoting 1 Cor 12:26. “This event is really a day to come together, to celebrate a day of joy with the local church.”

All are welcome to attend the Ukrainian Catholic Archeparchy of Philadelphia’s Benefit Luncheon on Sunday, Oct. 9 at 12:30 p.m. at the Ukrainian Educational and Cultural Center, located at 700 North Cedar Road in Jenkintown. For information and tickets, visit the Archeparchy website.

NEXT: Agency walks with women to recovery, joy and hope