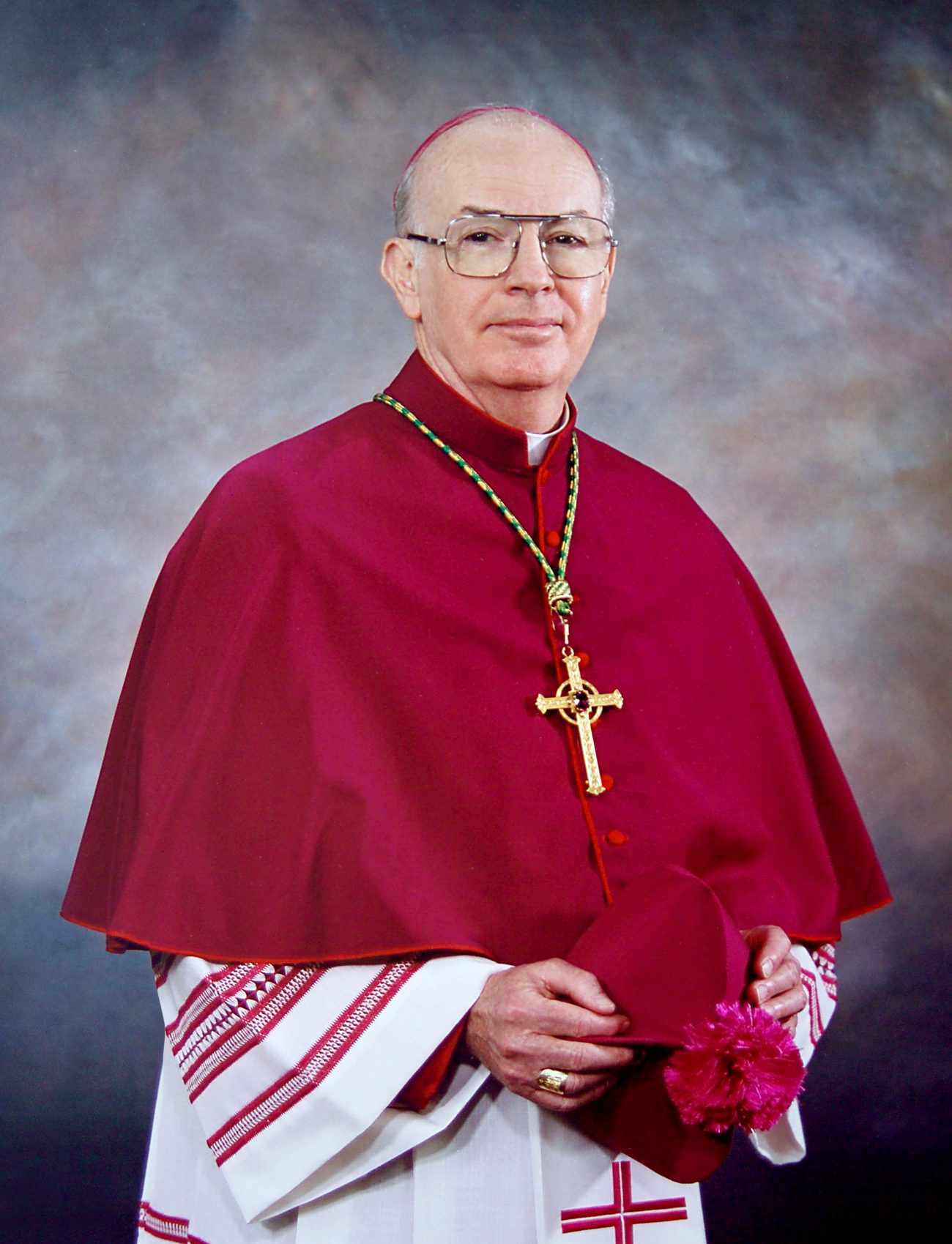 Bishop Robert Patrick Maginnis, retired Auxiliary Bishop of Philadelphia and Titular Bishop of Siminina, died at Villa Saint Joseph in Darby, Pennsylvania, on the evening of September 14, 2022 following a lengthy illness. He was 88.

A funeral Mass will be celebrated at the Cathedral Basilica of SS. Peter and Paul with Archbishop Nelson J. Pérez as principal celebrant on Sept. 22 at 11 a.m. Auxiliary Bishop Timothy Senior will preside over the reception of the body at 9 a.m., with Midmorning Prayer for the Dead to follow. Bishop Maginnis’ body will lie in state for public viewing until the start of the funeral Mass.

The liturgy will be open to the public and will be broadcast live via streaming video at https://vimeo.com/event/17522. Details of the funeral arrangements will be published by CatholicPhilly.com after they have been finalized.

In a Sept. 15 statement, Archbishop Pérez said he was “deeply saddened” to learn of Bishop Maginnis’ passing, noting that the bishop had for more than 60 years “served God’s people tirelessly and selflessly with grace and compassion.”

He also described Bishop Maginnis as possessing the “true spirit of a missionary disciple,” who was able to see “the face of Christ in everyone he met. … (He) shared the warm and comforting light of Christ’s love with them.”

As “a man of great joy and charity,” Bishop Maginnis “positively impacted the lives he touched in deeply positive ways,” said the archbishop.

(View a photo gallery of Bishop Maginnis’ life of service to the faithful of Philadelphia.)

Born Dec. 22, 1933 in Philadelphia to William and Cecilia Maginnis, Robert Patrick Maginnis was the youngest of four children. He attended elementary school at Saint Aloysius Academy in West Chester, graduating in 1948, and then enrolled in Saint Joseph’s Preparatory School in Philadelphia.

Following high school graduation in 1952, he entered in the program of priestly formation at Saint Charles Borromeo Seminary in Wynnewood, where he earned a Bachelor of Arts Degree in Theological Studies and a Master of Divinity Degree.

After ordination, Father Maginnis served as an Assistant Pastor at Our Lady Help of Christians Parish in Abington (1961-1964) and Immaculate Heart of Mary Parish in Chester (1964-1967).

Recognizing Father Maginnis’ administrative capabilities and his ability to connect with young people, Cardinal Krol called him to serve the broader local church. In 1967, he was appointed Assistant Director of the Department of Youth Activities and would become Director of the Office for Youth and Young Adults (OYYA) in 1981.

Father Maginnis was named an Honorary Prelate to His Holiness with the title of Monsignor by then-Pope and now St. John Paul II on Apr. 24, 1982. Msgr. Maginnis remained at the helm of OYYA until 1988, when he was appointed pastor of St. Alphonsus Parish in Maple Glen. For more than two decades he labored tirelessly to evangelize the young people of our region and he was much beloved for his efforts. Many of the programs and initiatives created during that time exist to this day in one form or another and remain popular.

In 1991, Msgr. Maginnis was named Regional Vicar for Montgomery County, a position he would hold for five years.

As part of his pastoral and administrative responsibilities, Bishop Maginnis oversaw the work of the Secretariat for Evangelization from 2004 until his retirement in 2010. As an auxiliary bishop, he also guided efforts undertaken by the Metropolitan Tribunal, the Chancery Office, the Office for Consecrated Life, the Office for Research and Planning, the Office for Black Catholics, and the Office for Hispanic Catholics. In addition, he was the driving force behind the launch of the inaugural Archdiocesan Men’s Spirituality Conference in 2009, an initiative that remains vibrant more than a decade later.

In 2007, Bishop Maginnis was chosen by The Philadelphia Daily News as one of its 75 Greatest Living Philadelphians.  In 2009, he was inducted into the Archdiocese of Philadelphia’s Catholic Youth Organization Hall of Fame, in recognition of his 21 years of work in youth ministry.

After his retirement, Bishop Maginnis remained highly engaged in the life of the church and dedicated great time and energy to its many charitable endeavors. Until declining health limited his activity, he spent several years living at St. Edmond’s Home for Children in Rosemont, a residential care facility for children and young adults with cognitive and physical disabilities. Bishop Maginnis served as their chaplain throughout his residency.

“His legacy is an indelible one of missionary discipleship,” said Archbishop Pérez, adding that he counted times spent with the bishop, whom he called “a friend and mentor,” as “a great blessing.”

“I ask the people of the Archdiocese of Philadelphia to offer prayers for the happy repose of Bishop Maginnis’ soul,” said Archbishop Pérez. “May God grant him the gift of eternal life and bring comfort to those who mourn his passing.”