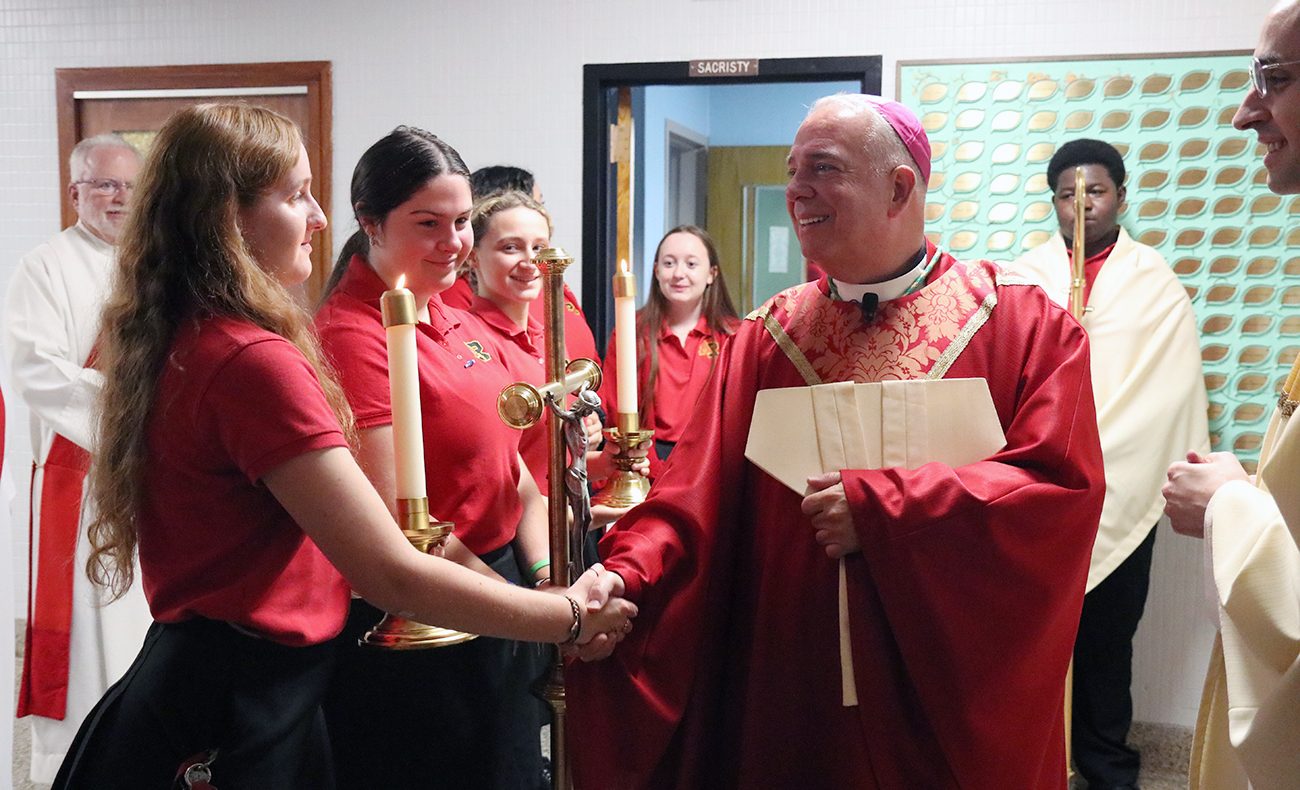 Christ “meets us where we are, but refuses to leave us there” out of love, said Archbishop Nelson Pérez.

The archbishop shared his reflection with hundreds of students during a Sept. 21 Mass he celebrated at Archbishop Ryan High School (ARHS) in Northeast Philadelphia, at which he was joined by Father James Callahan, pastor of Christ the King Parish and member of the ARHS board of limited jurisdiction; school minster Father Louis Monica, among the first priests the archbishop ordained.

The liturgy coincided with the Feast of St. Matthew, who was called by Jesus to renounce life as a tax collector – a despised and generally corrupt profession in Roman-occupied, first-century Palestine – and embrace his mission as an apostle, evangelist and martyr (Mt 9:9-13).

“Tax collectors were hated,” said Archbishop Pérez, suggesting that a modern equivalent might be “a drug dealer who robs people of happiness and destroys lives” while pocketing huge sums.

Nonetheless, “Jesus finds him exactly where he is,” said the archbishop, and invites him to “something better” – specifically, a life filled with peace, joy and the knowledge of God’s salvation.

In asking Matthew to follow him, Christ essentially said “you’re going to have to leave that (tax-collecting) table behind,” the archbishop noted.

The Gospel passage invites students to contemplate “where they actually are” regarding God, others and their own selves, said Archbishop Pérez.

That invitation is also a moment to express gratitude for the gift of education and of life itself, he added, pointing out the Greek word “Eucharist” translates as “thanksgiving.”

Archbishop Pérez encouraged the students with an original maxim he wrote just before administering the sacrament of Confirmation for the first time.

“I was a little nervous,” he admitted, “and I asked the Lord, ‘What do you want me to tell these young people?’”

The archbishop’s popular phrase – which has appeared on T-shirts, posters and coffee mugs “in five states,” he said – soon came to him.

“Never, ever underestimate the power of the Holy Spirit working in you, through you and despite you,” said the archbishop.