Archbishop Pérez speaks with adults of ‘all generations’ in Media 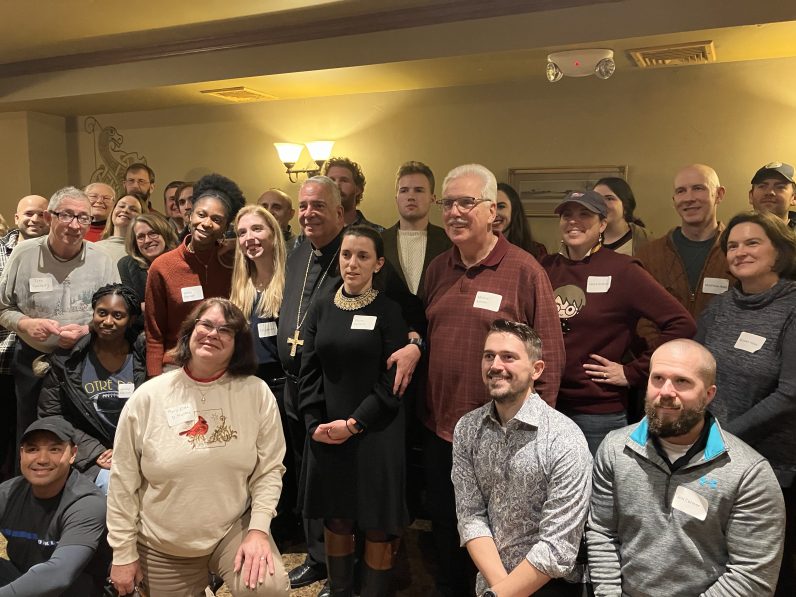 Participants with Nativity B.V.M. Parish’s “Theology on Tap for All Generations” pose with Archbishop Nelson Pérez (center) during the Dec. 22 event in Media, Delaware County. (Photo by Dan McCarty)

Nativity B.V.M.’s Catholic Adults in their Twenties and Thirties (Nat. C.A.T.T.) met for their monthly Theology on Tap Dec. 22 in Media, Delaware County. This month the organization welcomed Archbishop Nelson Pérez as the guest speaker for its “Theology on Tap for All Generations.”

Archbishop Pérez has a knack for working with youth and young adults. Shortly, after he was installed as Archbishop of Philadelphia in February 2020, many events had to be put on hiatus due to the pandemic. Archbishop Pérez addressed Nat. C.A.T.T. virtually that year and this time he was able to come and speak in person.

“He goes out of his way to be supportive of young adults,” said Chiara Cardone, Young Adult Minister at Nativity B.V.M. “He has been super responsive and eager to address us.”

Approximately 60 people attended the event for an evening of drinks, food, fellowship, and a talk by the archbishop.

Father Edward H. Bell, pastor of Nativity B.V.M., opened the night with a prayer suitable for the final days of Advent.

“We look forward to your coming and wellness,” said Father Bell. “We are your people, walking in darkness, seeking the light. Come Lord Jesus.”

In addition to its youth ministry to adults in their 20’s and 30’s, Nativity B.V.M. also has a Theology on Tap organization for those who are 40 years of age and older.

Once a year, usually in December, the two groups meet and hear about a topic suitable for folks regardless of age. This year’s focus was “Theology on Tap for All Generations.”

“We thought it would be nice to address the many different generations,” said Cardone.

The archbishop’s presence made some attend for the very first time including John and Lori Reynolds, parishioners of Nativity B.V.M.

Archbishop Pérez began the evening by discussing his background. He has been a priest for 34 years and spent much of that time in inner city work. He served as parochial vicar of St. Ambrose Parish in Philadelphia, assistant director of the Office for Hispanic Catholics, founding director of the Catholic Institute for Evangelization, and pastor of St. William Parish, Philadelphia. His work in education included teaching courses in psychology and religious studies at LaSalle University. In 1998, he was named Chaplain to His Holiness, Pope John Paul II, with the title of Monsignor. 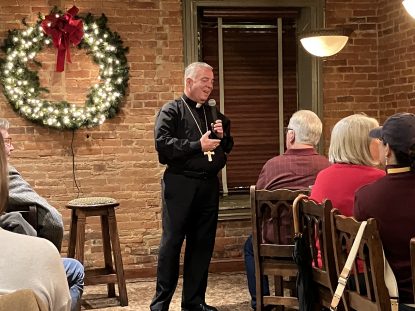 Archbishop Nelson Pérez speaks to adults of all ages during his visit with them Dec. 22 at “Theology on Tap for All Generations.”

Making his way to the suburbs, he was pastor of St. Agnes Parish in West Chester for three years before receiving a call in 2012 during a visit to Florida that the Holy Father wanted to appoint him a bishop. Archbishop Charles Chaput, then Archbishop of Philadelphia, helped him to accept this call despite his hesitancy. His mother made him realize he could not say “no.”

Appropriate for a talk with young adults as well as older adults, Archbishop Pérez mentioned the various ages of people attending Mass and a personal encounter with a young woman who was attending Mass alone. She wanted to go to confession but the pastor did not have time as the liturgy was about to begin. Archbishop Pérez sat down with her. She cried for what she had in her heart and that someone heard her out. He also listened to her confession. She did not know that Archbishop Pérez was the Archbishop of Philadelphia. When he revealed his identity, they embraced.

The Archbishop hoped that this example may be a way for people to become closer to their fellow parishioners and come to know them in a more personal manner. A parish should be a community of communities. Mass itself is a community.

“Communities are community but don’t necessarily take care of each other,” said Archbishop Pérez. “People take care of themselves. Some churches are too big.”

Archbishop Pérez feels he should help young adults realize they need a place to belong. While nobody can live without food, water, or air, it is essential for young adults to feel secure. Whenever, Archbishop Pérez is informed of an event with young adults, he immediately puts it on his calendar even if he may be unable to attend.

“They want to belong,” said the Archbishop. “They’re going to replace us.”

When it came time for questions, a mother of young adults asked the Archbishop for advice on bringing them closer to the Church. He encouraged her to be a good example.

Another question asked was how to promote fellowship at Mass. Archbishop Pérez recommended being intentional and figuring out some new and creative ways to engage other Catholic faithful. Befriending young Catholics who may be less connected to Jesus can come a long way. They should know that Jesus will not be upset.

Archbishop Pérez concluded the evening with a prayer before wishing everyone a Happy Advent. With Christmas still a few days away, he encouraged everyone to remember that we need Advent to prepare for Jesus’ coming.

Nat. C.A.T.T. is rapidly growing and the monthly Theology on Tap events held September through June are becoming increasingly popular. It will kick off 2023 with its next gathering Thursday, January 19.

“Theology on Tap is one way for parishes to engage young adults and bring them to the church,” said Cardone. 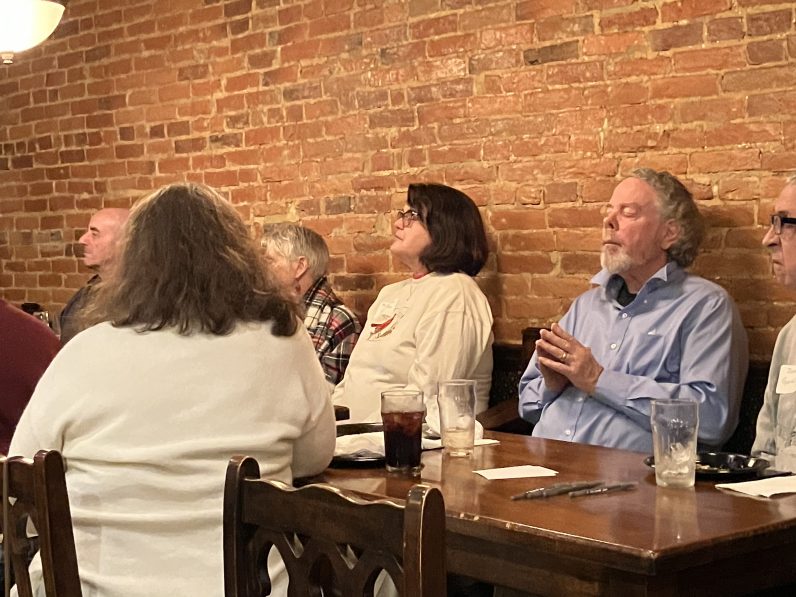 Participants at the Dec. 22 “Theology on Tap for All Generations” listen to Archbishop Pérez speak.

NEXT: Archbishop Pérez to offer Jan 1. Mass for Pope Emeritus Benedict XVI at the Cathedral