St. Charles Borromeo Seminary eyes the past and the future with cross at construction site 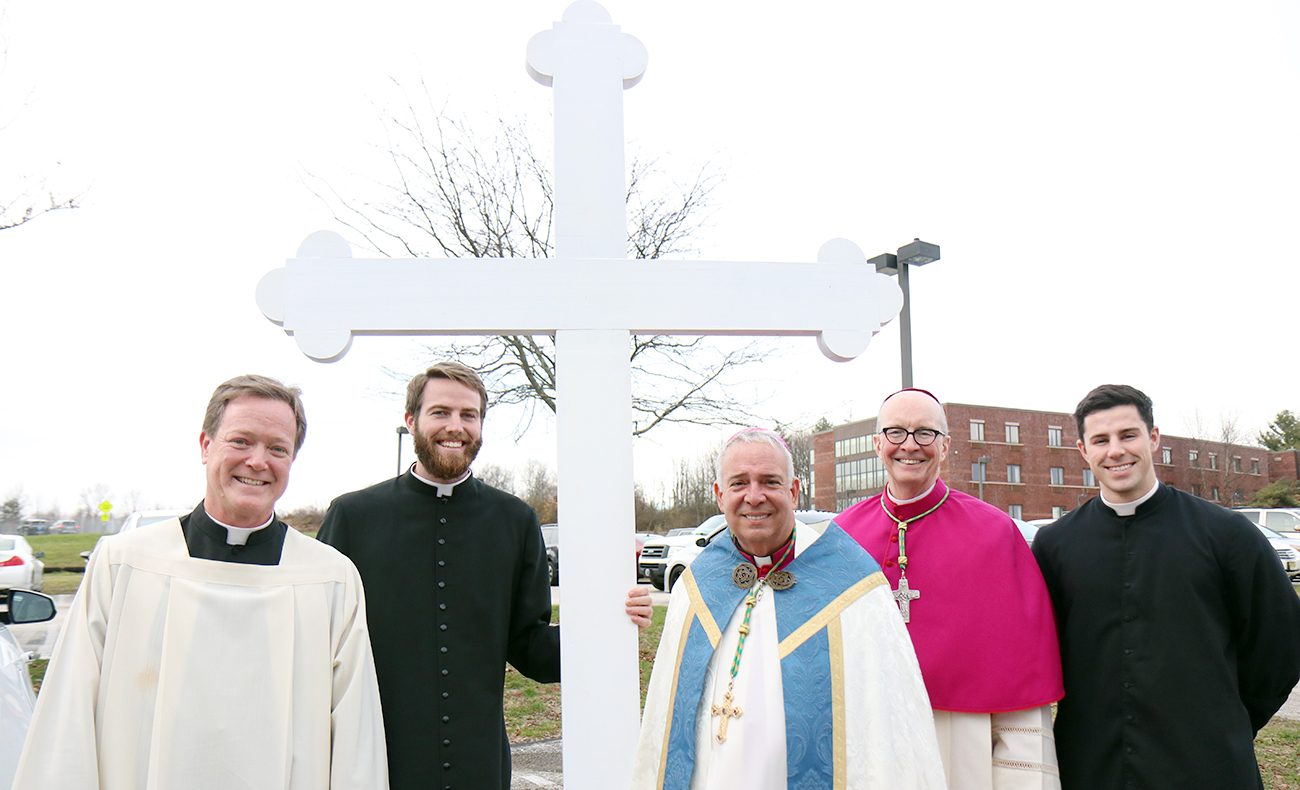 Everybody needs a hobby, as the saying goes, including seminarians.

For Rob Bollinger, a seminarian at St. Charles Borromeo in the Archdiocese of Philadelphia, his hobby – his way of seeking some respite from his studies — starts with a piece of wood.

“There’s definitely a sense of accomplishment to go from a piece of wood on the ground to something that’s a totally new purpose,” he said recently. “To see the process from start to finish is very gratifying.”

From that initial piece, through careful and precise work, items emerge like a Murphy bed he built for a family member or a hand-carved chessboard. Now he can add a seven-foot-tall white cross of poplar wood to the list. And not just any cross. Bollinger’s latest project will stand over the construction site of a new seminary on land purchased from Gwynedd Mercy University outside Philadelphia. The cross, constructed from an old pew found in the basement of a chapel at the current seminary, will pay homage to St. Charles Borromeo’s illustrious past, while looking to the future – all under the care of Christ.

“There is undeniably a sense of sadness about leaving our Overbrook campus” which the seminary has called home since 1871, said Bishop Timothy Senior, chancellor of St. Charles Borromeo. “But continuity is very important, and this cross is an expression of that. As Catholics, we center our lives on dying and rising. There is a dying, but there is a resurrection, too. This cross then is really about the future.” 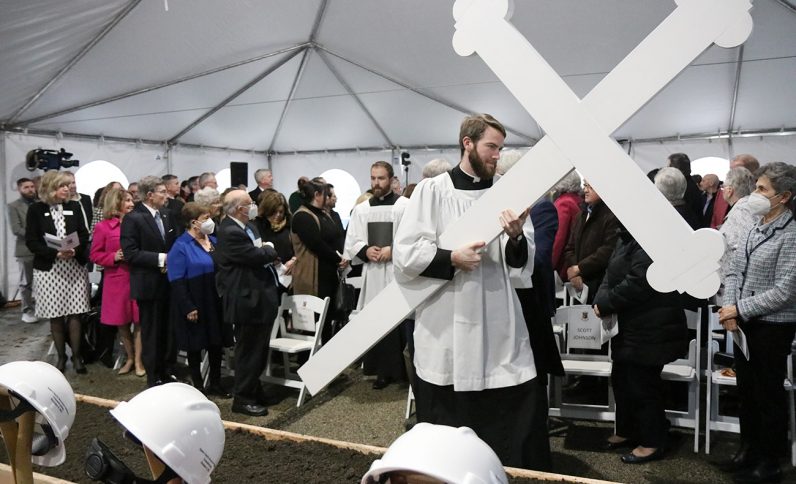 Seminarians, members of the seminary’s board and other supporters also attended.

“The work we are beginning today should enliven our faith and make us grateful,” Archbishop Pérez said in his blessing. “We know the familiar words of the psalm, ‘the Lord does not build a house in vain to its builder’s labor.’ Whenever we look to the interest of our neighbor for the community and serve them, we are in a sense God’s own co-worker.”

>>PHOTO FEATURE: Groundbreaking and blessing of the site for the new campus of St. Charles Borromeo Seminary

Seminary Rector Fr. Keith Chylinski said in his opening remarks that the cross and its location overseeing the construction site “serves as a reminder of why we’re here and why this seminary is being built. It’s being built to proclaim the hopeful Good News to the world that God is with us; that He is alive and He’s here.”

The new seminary is scheduled to be ready for the 2024-25 academic year, and it will be a long time coming.

In 2016, former Archbishop Charles J. Chaput, O.F.M. Cap., accepted a recommendation from the Seminary Board of Trustees to sell the seminary property in Wynnewood, another suburb of Philadelphia, and explore options to partner with a local Catholic college.

Eventually, the current seminary property was sold to Main Line Health, a hospital provider, and the seminary reached an agreement to move to the new location in Lower Gwynedd Township. Founded in 1832, the seminary currently has 133 seminarians, including 68 studying for the Archdiocese of Philadelphia.

The seminary holds a special place in the history not only of the Archdiocese of Philadelphia but also the entire Catholic Church in America. Five popes and two saints have visited the campus over the years in addition to the training of multiple archbishops and bishops and thousands of priests, deacons, religious and laypeople.

The idea of installing a cross at the construction site had its roots years ago when Fr. Chylinski was the music director at Corpus Christi Church in Lansdale, and the parish did something similar before building a new church. 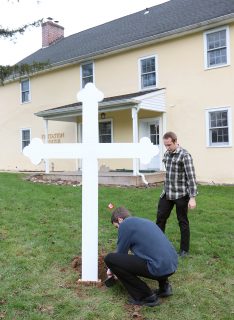 “I see my role as rector as two-fold – helping people to grieve the loss of moving from this beloved campus but also to look forward as we move to the new,” he said in an interview. “The very fact we are using wood from a pew for the cross is meant to be a sign that we are not leaving everything behind as we move to the new place – that we are taking many things with us – not the least of which is our greatest treasure, our seminarians, themselves.

“So, then we approached Rob about building the cross because he’s known here as a great craftsman.”

Bollinger is in the seventh year of a nine-year program. He started woodworking early in his studies at the seminary, starting with You Tube videos and working his way to bigger projects. Bollinger was assisted in this project by fellow seminarian Greg Miller.

“People don’t usually picture someone studying for the priesthood to have such normal hobbies,” Bollinger said. “But I’ve found this to be extremely recreational in the sense that whenever I feel burnt out or need a break, I do woodworking for an hour, and I feel rejuvenated.”

Bishop Senior said healthy leisure and outlets such as woodworking are an important part of formation for seminarians.

“There is a spiritual dimension for seminarians being able to express themselves creatively,” he said.

But will Bollinger be able to continue with his hobby when he’s ordained? He hopes so. He’s heard of parishes with abandoned wood shops in their basements that were once used by priests with a similar inclination.

“That would be cool to be placed in one of those,” he said.