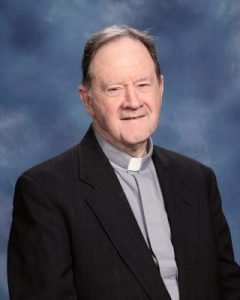 Deacon Campbell was ordained on June 6, 1999 by His Eminence, Anthony Cardinal Bevilacqua, at the Cathedral Basilica of Saints Peter and Paul. He was assigned to Saint Rose of Lima Parish, North Wales, where he remained until his retirement on March 31, 2009.

Deacon John J. Campbell was born on December 31, 1933, in Philadelphia. Deacon Campbell graduated from North East Catholic High School. He entered Saint Joseph’s Seminary, Yonkers, New York, and remained there until 1959. He then entered the United States Army, and served honorably until February 9, 1962. At that point, he was transferred to the U.S. Army Reserve, and continued reserve duty until October 18, 1965. In 1967, Deacon Campbell received a Bachelor of Science degree in Business Administration from Saint Joseph’s University, then Saint Joseph’s College. He earned an MBA from Temple University in 1976.

Deacon Campbell retired in May 1993 from Merck & Company, working for the company for over 40 years as a pharmaceutical quality engineer.

Deacon Campbell married Maureen Cashman on August 5, 1972. She passed away on November 6, 2013. They did not have any children. He is survived by a brother, Michael; and sister, Claire.

Reception of the Body and viewing was held Tuesday, December 6, 2022, at 10:00 AM, followed by his Funeral Mass at 11:00 AM at Saint Rose of Lima Church, 424 S. Main Street, North Wales. The Principal Celebrant will be Most Reverend James P. Green.  The Deacon of the Mass and homilist will be Deacon Joseph V. Hosack, Jr.

PREVIOUS: Sister Helen Mary Reynolds, who served 55 years in the Archdiocese of Philadelphia, dies at 87