On June 24, 2022, I had just finished morning prayer when I saw the news. I almost couldn’t believe it. The Supreme Court decision to overturn Roe v. Wade had been hoped for and anticipated for decades. When the United States Supreme Court announced its decision in Dobbs v. Jackson Women’s Health, it was a culminating moment for countless hopes, prayers, and much legwork. Yet, as has been noted many times by people of different viewpoints, this is only a way-point on the journey of the pro-life mission.

As a Christian, I have a Gospel mission to preach the Kingdom of God in the world. As Catholics, we see that Kingdom concretely in the teachings of the Church. Even more so, as a seminarian in formation for the Priesthood, I see a great task ahead of me to preach Christ’s message of life to the world. This task is not limited to abortion or to legal decisions. Rather, the mission is not complete until all hearts are converted to recognize the inherent dignity of human life, our Imago Dei. It also involves embracing and furthering what it means to be pro-life in a holistic fashion. To truly promote dignity for human life at every stage we need to do what we can to care for the poor, the elderly, the immigrant, those struggling with addictions, and all those in need.

What is the point of the March for Life this year? January 2023 marks the 50th year of the annual March. Certainly, it is nice as a round number, but more importantly, this will be the first March post Roe. Far from being merely a victory march, I believe that the March this year demonstrates our dedication to the pro-life cause. Whereas rhetoric against the pro-life movement often claims our only goal is outlawing abortion, we show that we are truly dedicated to a culture of life. By continuing to march, we show that our efforts are not done. We are not content to stay at home simply because Roe was overturned. Our efforts should remain tireless until we see our nation and world renewed.

Although I spend most of my time each year in the walls of Saint Charles Borromeo Seminary, the work of the pro-life movement has been something very close to my heart. I am often in awe witnessing the real work of so many people dedicated to the pro-life movement. From pregnancy care centers to legislative advocacy, education and leadership programs to donation drives, the pro-life movement displays its selflessness. What I am able to offer is the work of one person. It may not seem like much, but when joined to the work of others the result is powerful. The movement contains so many selfless people who pour themselves out for the needs of others. Ultimately, this is what the pro-life cause is all about: to love our neighbors, as Christ Himself loves.

When we go to march in our nation’s Capital, I do not know whether it will be the last year the March for Life takes place in Washington, D.C. Perhaps next year, we will march in Harrisburg, Pittsburgh, Philadelphia, Allentown, and every other city in need of the Gospel message. What I do know is that our dedication has not wavered or dissipated. So long as we live, we will continue marching forward towards a culture of life! 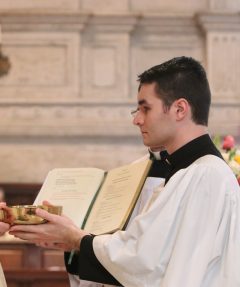 Nikolai Brelinsky was born and raised in North Carolina. In 2015, Nikolai entered Saint Charles Borromeo Seminary in Philadelphia where he has completed studies in Philosophy and now studies Theology. He looks forward to serving as a priest in the Diocese of Allentown.