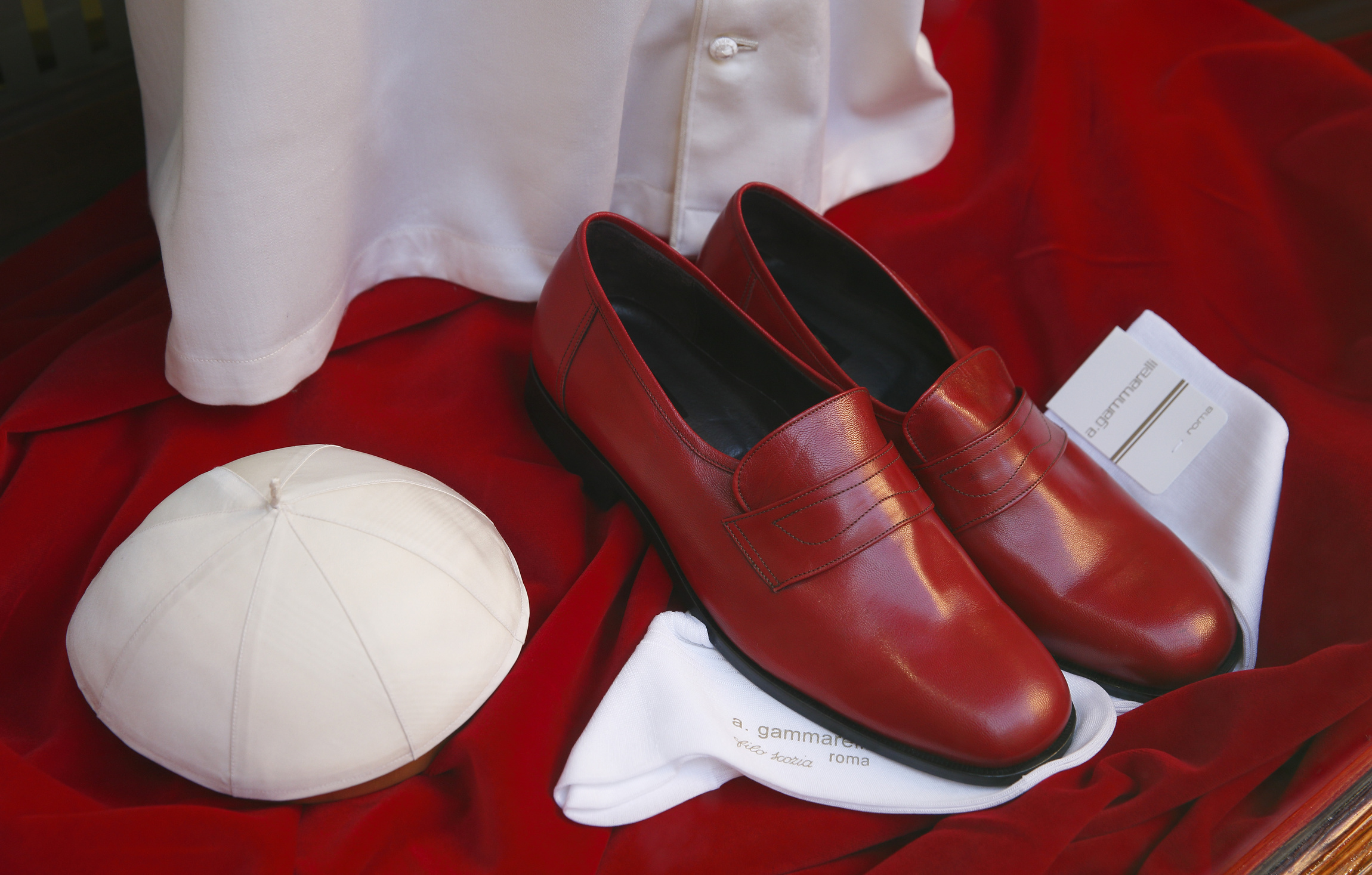 VATICAN CITY (CNS) — Even though a conclave to elect a new pope has not yet started, the papal tailors have the white cassock ready for the new pontiff when he appears less than an hour after his election on the balcony overlooking St. Peter’s Square.

The Gammarelli shop proudly showcased in its street-level window the white wool cassocks in three different sizes: “tall,” “medium,” and “small,” since no one knows who will be the new pope or what his measurements will be.

“We received the order (from the Vatican) to prepare the three outfits a few days after Benedict gave the announcement” Feb. 11 to step down, Lorenzo Gammarelli told Catholic News Service.

It takes three-and-a-half days to cut, prepare and sew by hand one complete cassock, said the sixth-generation family member, so all three were finished “very quickly” by March 1 and displayed in the shop window the morning of March 4.

The shop eventually will deliver the ensemble to the Vatican in time for the conclave and election.

The Gammarelli shop was founded in 1798 and has served every 21st- and 20th-century pontiff except for Pope Pius XII, who stuck with his family’s tailor.

It’s not a given that every pope will call on the shop’s services, so the shop always waits to receive orders from the Vatican.

But chances are good they will get called to do work for the next pope “since we have served all these popes,” he said, nodding toward a row of pictures of seven popes on the wall near the shop’s front entrance.

The sets available for the new pontiff to wear after he is introduced with the words “Habemus papam” (“We have a pope”) include a cassock with an attached capelet, a white silk sash, a white skullcap, red leather shoes and a red velvet mozzetta or capelet with ermine trim, a style retired Pope Benedict XVI brought back into style.

Blessed John Paul II “preferred very light-weight clothing and evidently the fur (and velvet mozzetta) was too heavy for him, therefore, he preferred not to use it,” Gammarelli said.

If it’s necessary, a Gammarelli tailor will head to the apostolic palace a few days after a successful election to take measurements of the new pope for a properly fitting cassock and vestments, he said.

However, “often (a new pope) is already one of our clients, and we already have his measurements on file,” he said.

The old shop, which is located just a few yards from the Pantheon, was bustling as shopkeepers quickly packaged a backlog of old orders. One shopkeeper was busily folding magenta sashes for a bishop and sealing them in brown wrapping paper, while another stacked shoe boxes containing black kidskin shoes, men’s size 9, for delivery.

Getting the order of papal cassocks and the sartorial needs of the upcoming conclave ready trumped all else the past three weeks, Gammarelli said.

“Therefore, now we have to make up the time … we lost with clients who had ordered things first,” he said.

The shop walls are lined with cubbyholes and shelves containing bolts of different weights of black cloth, embroidered fabrics for liturgical vestments and silks in cardinal red and magenta. There are also miniature models of scarlet and black hats as well as a small wooden torso form draped with a cardinal’s full attire.

One drawer was even labeled “under-things.”

Gammarelli said that while the shop offers full clothing service for the pope, from the skullcap down to the papal socks and shoes, it did not include underwear.