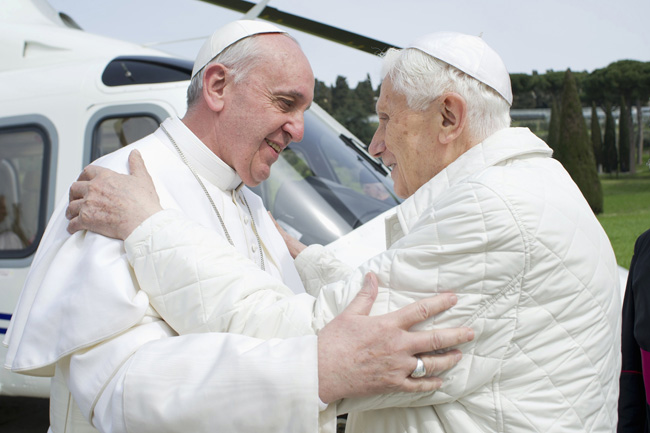 Pope Francis gave Pope Benedict an icon of Mary and Jesus that the Russian Orthodox delegation to his inauguration had given him just a few days earlier.

“They told me this was Our Lady of Humility. If I may say, I thought of you,” Pope Francis said. Pope Benedict, obviously moved, grasped his successor’s hands.

Pope Francis told Pope Benedict, “You gave us so many examples of humility and tenderness.”

The meeting took place in Castel Gandolfo, where Pope Benedict is staying while a Vatican monastery is being remodeled as a residence for him.

The retired pope moved with much greater difficulty than he did a month ago. Walking with a cane, he took smaller and slower steps.

When the two went into the chapel of the papal villa to pray, Pope Benedict indicated that Pope Francis should take the front pew, but Pope Francis, reaching out to help his predecessor walk, said, “We’re brothers,” and they knelt side by side.

Traveling by helicopter from the Vatican, Pope Francis arrived shortly after noon. While the two have spoken by telephone at least twice, this was their first meeting since Pope Francis’ March 13 election.

Pope Benedict, wearing a quilted white jacket over a simple white cassock — without a short cape or white sash — was driven to the garden heliport to greet his successor.

Jesuit Father Federico Lombardi, Vatican spokesman, said the two rode in the same car to the villa. Pope Francis sat on the right — the spot reserved for the pope — and Pope Benedict sat on the left.

After their visit to the chapel, the two spent 45 minutes talking alone, Father Lombardi said. He would not release details of the conversation and would not explain what was in the large box and two large envelopes seen on the table between the two.

The two had lunch together at Castel Gandolfo, then reportedly went for a short walk. Pope Francis returned to the Vatican about two-and-a-half hours after he arrived.

Hundreds of people who were gathered in the main square outside the papal villa were left disappointed. They had hoped the two popes — one reigning, one emeritus — would come to the balcony together.

Father Lombardi told reporters, “Remember that the retired pope had already expressed his unconditional reverence and obedience to his successor at his farewell meeting with the cardinals, Feb. 28, and certainly in this meeting — which was a moment of profound and elevated communion — he will have had the opportunity to renew this act of reverence and obedience to his successor.”

He also said, “Certainly Pope Francis renewed his gratitude and that of the whole church for Pope Benedict’s ministry during his pontificate.”

NEXT: Pope on Palm Sunday: Christ’s passion leads to joy