Pope Francis: Don’t give in to pessimism, courageously share Gospel 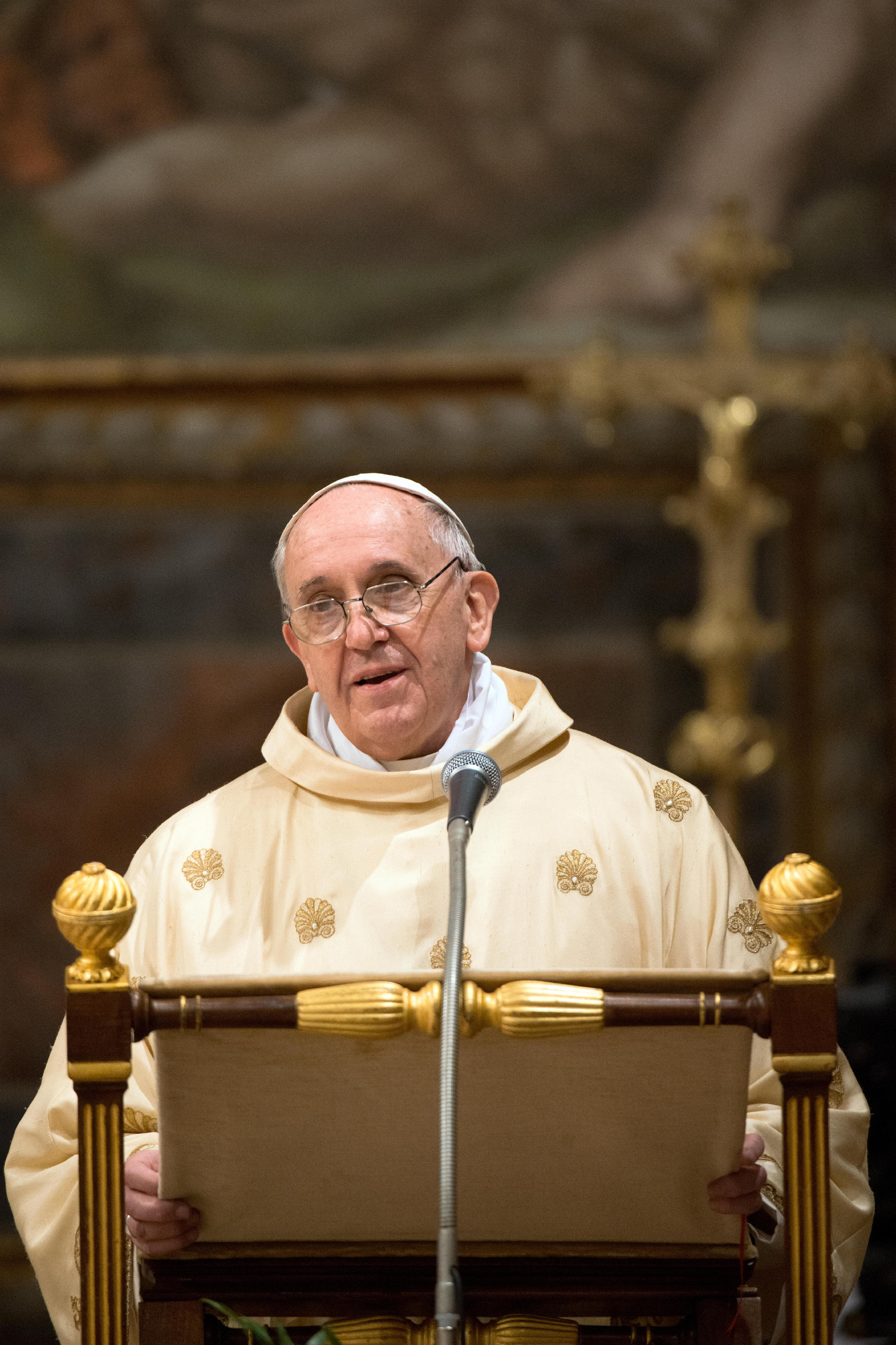 VATICAN CITY (CNS) — Never give in to the devil’s pessimism, discouragement and bitterness, Pope Francis said; Christians need to share the Gospel message with joy and courage because it will truly answer people’s deepest needs.

Young people also need the wisdom and knowledge of older people, whose insight is like “fine wine that gets better with age,” he told the College of Cardinals March 15.

Wearing a simple white papal cassock without the red mozzetta, the pope looked relaxed and comfortable during the meeting, diverging often from his prepared text and speaking heart-to-heart in off-the-cuff comments.

“Dear brothers, perhaps half of us are in our old age,” he said with a smile.

But the 76-year-old pope said he likes to think of old age as a sign of wisdom.

“Like the elderly Simeon and elderly Anna in the temple,” he said, they had the knowledge and wisdom from life’s journey to recognize Jesus.

In his 13-minute talk, Pope Francis thanked everyone in the college and the Vatican for their support and help during the interregnum.

He thanked the faithful who turned out in St. Peter’s Square the night of his election March 13, saying the image of so many people gathered in prayer and joy was “still ingrained in my mind.”

He also thanked his “venerated predecessor,” retired Pope Benedict XVI, for having “enriched and reinvigorated the church with his magisterium, goodness, guidance, faith, humility and gentleness, which remain as a spiritual heritage for everyone.”

He said Pope Benedict has “lit a flame deep in our hearts, which will continue to burn because it will be fed by his prayers, which will still support the church in her spiritual and missionary journey.”

Pope Francis said that, with his pontificate, he will “serve the Gospel with renewed love, helping the church become ever more in Christ and with Christ.”

In the context of the Year of Faith, established by Pope Benedict, “we will strive to faithfully respond to the continuing mission: Bring Jesus Christ to humanity and lead people to an encounter with Jesus Christ, the way, the truth and the life,” he said.

Pope Francis recalled his predecessor’s message that it is Christ through his spirit, not individuals, leading the church through history.

“We never give in to pessimism, that bitterness that the devil offers us every day,” knowing the Holy Spirit’s life-giving and unifying force is at work, he told the cardinals.

Never give in to discouragement either, he said, because “we have the firm certainty that the Holy Spirit gives the church, with its powerful breeze, the courage to persevere and also to find new methods of evangelization, to bring the Gospel to the far ends of the earth.”

“The Christian truth is attractive and persuasive because it responds to humanity’s deepest needs,” he said, adding that the Gospel is as valid and applicable to the world today as it was thousands of years ago.

The pope tripped, but did not fall after he stood up from the papal chair without realizing it was on a platform elevated a few steps off the ground when he went to greet the dean of the College of Cardinals, Cardinal Angelo Sodano.

In his opening remarks, the cardinal, speaking on behalf of the whole college, thanked the pope for “having accepted, with a great and generous heart, the Lord’s invitation” to lead the universal church.

The papacy is “a demanding job,” Cardinal Sodano said, but the pope will have the help of the Holy Spirit.

Pope Francis told the cardinals he hoped they’d return home enriched by their experience in Rome — an event that was “so charged with faith and ecclesial communion.”

The conclave and the days of preparation before it provided a unique experience that was marked by “great cordiality,” he said.

“This is good because we are brothers,” he said, who are part of a community and a friendship “that is good for everyone.”

The cardinals’ sense of openness and mutual friendship helped the Holy Spirit do its part during the conclave, he said.

One “curiosity,” the pope noted, is that the Holy Spirit is a sort of “apostle of Babel” that creates the differences in the church.

But on the other hand, he said, it’s the same Holy Spirit that “unites these differences, not in equality but in harmony,” by focusing everyone’s different gifts on the adoration of the Father, Son and Holy Spirit.

After his talk, Pope Francis personally greeted each of the cardinals present. Some of them offered him gifts, books or letters; another gave him two small bags of religious objects to bless.

Cardinal Wilfrid Napier of Durban, South Africa, gave the pope two yellow wristbands, one of which the pope immediately placed on his wrist.

PREVIOUS: Philadelphia priest in Rome witnesses profound moment with 200,000 others

NEXT: Pope Francis: Without faith in Christ, church is just ‘pitiful NGO’