Philadelphians make it through snowstorm to join March for Life 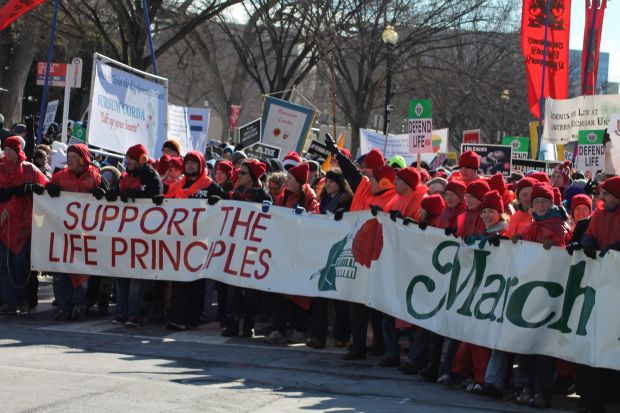 It is billed as the biggest pro-life event in the world, and justifiably so.

Ever since the U.S. Supreme Court’s Roe v. Wade decision in 1973 legalizing abortion in the United States, crowds usually in the hundreds of thousands have been marking the Jan. 22 anniversary by flocking to Washington, D.C., to rally in support of life and march to the Supreme Court building.

They will do this until the decision is reversed or hell freezes over, whichever comes first.

Whatever the condition of the nether regions this year, the Eastern United States were certainly snowed under and frozen over. Did it put a dent in the crowd? Well yes, but not by much.

Looking at the crowd it seemed clear that the largest segment was from the Washington, Virginia and Maryland area and the second largest group included people who came a great distance and were already on the road when the magnitude of the storm became known.

It was areas like Philadelphia, already in the storm zone the day before, where for safety concerns there were massive cancellations. That doesn’t mean the Archdiocese of Philadelphia was totally unrepresented.

For example, there were two buses from St. Andrew Parish in Newtown, Bucks County.

“We worried about it and we prayed about it,” said Peggy Bradbury, the organizer for the parish.

The group, which included about 59 people on two buses from St. Andrew and surrounding parishes, left Newtown about 6:45 a.m. and arrived at the Basilica of the National Shrine of the Immaculate Conception at about 9:45 a.m., which was in time for two priests on the buses, Fathers Ken Brabazon and David Friel, to concelebrate at the 10 a.m. Mass.

“I’ve been coming to Washington for about 15 years,” Bradbury said. “I think of all of the wounded women because of this decision. Many of these women don’t want to have an abortion; they are pressured by others or by circumstances. They know it and suffer so much afterwards.” 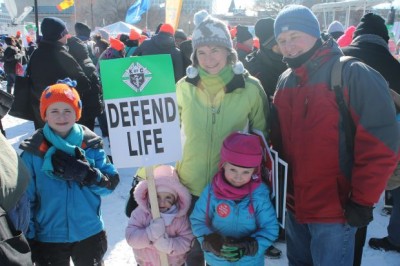 Because there were fewer Philadelphians at the rally they did not stand out. However, Maureen Smith, who was wearing a Phillies cap and carrying a Phillies backpack, certainly stood out in the crowd.

“I live here,” she explained. “I was born in Willow Grove, St. David’s Parish. My parents moved when I was very young but I’m still a Phillies fan through and through.”

As for the March, “I’m here to give reverence to every human being made in the image and likeness of God,” she said.

At Villanova University, it was touch and go whether or not they would come to Washington.

“If the university had cancelled all classes we could not have come,” explained Michael Breault, the treasurer for Villanovans for Life and a junior studying finance. “We left at 7 a.m. and got to the Basilica at 10:15.”

As it was, about half of those originally scheduled for the trip could not come and in the end there were 50 in the group.

“We think this trip is important, it is the culmination of everything we do for life,” Breault said. “It is a whole different experience. It’s energizing to see the people, especially young people.”

With temperatures in the low teens, “It was cold, but we were prepared for it,” he said. “Our hands were cold but our hearts were warm.”

There were also touches of Philadelphia where least expected. Howard and Patricia Schultz came down from St. Columbkill Parish, Boyertown, in the Allentown Diocese.
“We left around 7:30 a.m. and got here around noon,” said Howard, who is a candidate for the permanent diaconate. When informed they were being interviewed for CatholicPhilly.com, Howard said, “We used to live in Philadelphia in St. Leo Parish, Tacony.” It’s a small world indeed.

Steve and Holly Day have absolutely no Philadelphia connection but their family of three little children, Jane, Jacqueline and Elizabeth, smiling in spite of the bitter weather, was absolutely irresistible.

“We are from St. James the Greater Parish, Charleston, West Virginia, that’s near Harper’s Ferry,” Steve said. “It only took us two hours to get here. We came because we wanted to stand up for life.” 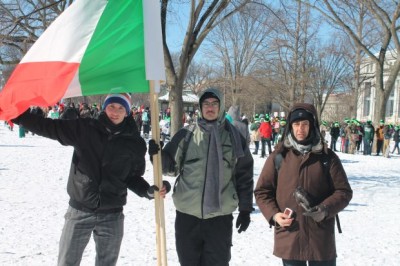 A delegation from Italy

Coming from a much greater distance was the small group of men holding a large national flag. “We came from Italy,” said their spokesman, Andrea Lavelli. “Life is very important.”

Steven Bozza, director of the Archdiocese of Philadelphia’s Office for Life and Family, was multi-tasking in Washington. Arriving at the beginning of the week he’d had a meeting with Father Frank Pavone of Priests for Life and attended a USCCB Mass and reception for pro-life directors, and of course the Tuesday Opening Mass and the Rally and March.
Afterwards, he said, “This was my third time going. I was really impressed. When you see the amount of people who come and the tenaciousness of everybody, that’s what I took home.”

Some of those who wanted to come to the rally but couldn’t were frustrated. “Our bus was cancelled,” said Pat Stanton, who with his father, John, has never missed the March in 40 years.

They started down by automobile, but their windshield wipers kept freezing up. They only got as far as Philadelphia International Airport when they had to give up, but their hearts were in the right place.

When the March for Life began 41 years ago, in Philadelphia it was the Knights of Columbus who really organized the local effort. They are still active in it, for example the bus that went from St. Joseph Parish in Downingtown was financed by fundraising done by Father Fenerty Council 7208, according to Dan Bowser. “I’ve been going for 35 years and coordinating for the parish for 34 of them,” he said. “This is our faith. We are surrounded in this world, and the weather seems miniscule compared to what this is about.”

Coming home from the march, the St. Joseph’s bus picked up another passenger — their pastor, Father Joseph McLoone.

There was another expatriate Philadelphian at the Mass. “Bishop (Herbert) Bevard was there,” said Father McLoone. “He came up from the Virgin Islands and brought 80 people with him.”

Now that is dedication. 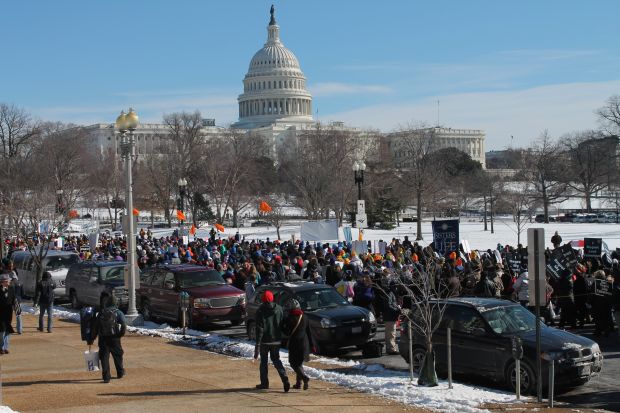 NEXT: Catholic Charities Appeal aims to give hope in 2014