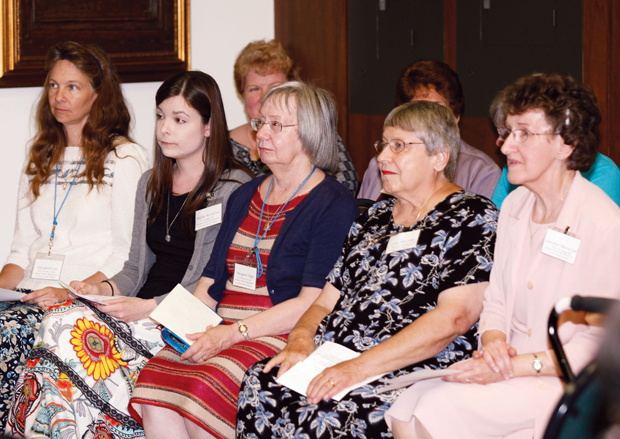 The panel of women speaking at an information session July 30 at the Archdiocesan Pastoral Center included consecrated virgins from all walks and from across the country. (Photos by Maria Tucker) 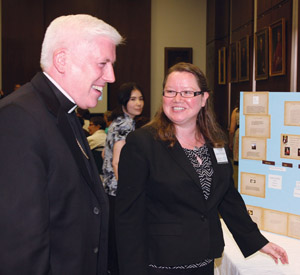 Bishop Daniel Thomas attended the information session and met consecrated virgins such as Joanie McCann of Salem, Mass., who displayed a timeline of the order of virgins in the history of the church and its revision in recent decades. (Maria Tucker)

A group of vibrant, talented and joyful single women are visiting Philadelphia from across the United States this week. Sorry gentlemen, these ladies are definitely already taken.

The 43 consecrated virgins who joined an information day Wednesday, July 30 at the Archdiocesan Pastoral Center see themselves as brides of Jesus Christ. They were in Philadelphia July 28-31 for the convocation of the United States Association of Consecrated Virgins.

Consecrated virgins are not nuns but rather women working and evangelizing in the world. The order of virgins traces back to the early church and although it fell out of use as monastic communities flourished over time, it has been revived by the church in recent years.

The women do not live in community as nuns do but their lives are characterized by joy, austerity, acts of charity and prayer, explained Judith Stegman, president of the association.

The virgins at the Wednesday gathering ranged from young to middle-aged women and in professions as diverse as health care, finance and ministry. All share a love for Christ as passionate and committed as that of a wife and husband.

Dating a man here on earth and marrying him is out of the question. “It would be like cheating on my husband. I’m married to the Lord, I’m his,” said Joanie McCann, 41, a college campus minister in Salem, Mass.

She recalled the date of her consecration five years ago to the order of virgins — a recognized vocation in the Catholic Church apart from religious women and men, married lay people or ordained clergy — as easily as a married person would remember his or her wedding day.

Once she stumbled upon information concerning consecrated virginity on a website, she found herself drawn more and more to the vocation. “The more I found, the more I knew it was for me,” she said, and conceded “it’s something most of the church doesn’t know about. It’s hidden.”

That fact is one reason for the “meet and greet” session at the Philadelphia Archdiocese’s central office building in center city on Wednesday, led by Father Dennis Gill, director of the archdiocesan Office for Divine Worship who said a discernment retreat for 25 women considering the vocation will be held next week at Malvern Retreat House in Malvern. 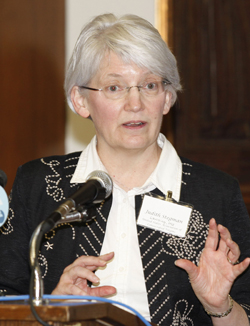 After a presentation by Stegman on the history of the order of virgins and a review of the rite of consecration of virgins that was revised in 1970, each of a panel of eight virgins gave prepared answers to common questions people might have about consecrated virgins. They also fielded questions from curious members of the local media.

Stegman estimated 230 consecrated virgins live in the United States — including two in the Philadelphia Archdiocese — and about 3,000 worldwide. The figures were estimates because the women are not organized under a centralized authority, such as nuns and brothers in a religious order.

The women are under the authority of their local diocesan bishop, who they consider their spiritual father, Stegman said. Consecrated virgins typically meet with their bishop about once a year for a give-and-take conversation in which the bishop offers prayerful support and encouragement to the woman, while she informs him of situations in his diocese in ways he might not be aware.

That includes conversations the women have in workplaces and homes with people who can express thoughts or questions about religion where they would not encounter a bishop or priest, or might otherwise feel intimidated by doing so.

Elizabeth Lee of Fall River, Mass., said a consecrated virgin living in the world “knows the needs of people and can bring them to the bishop, while also assisting him communicating to the diocese.” 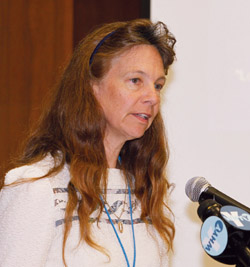 Her “ministry of presence” includes encouraging the bishop by “praying for him, supporting him and standing by him,” she said.

A virgin also can be “present to a parish and to those who are outside the community of the faithful,” she said.

That echoes the sense of “spiritual maternity” for all people that women like Linda Ann Long of St. Paul, Minn., expressed. People engage her in spiritual conversations whether at work or in the many visits for meals at her home, which means her social life is not lacking.

“I’m living alone but I’m never lonely, unless I take my eyes off my spouse,” she said. 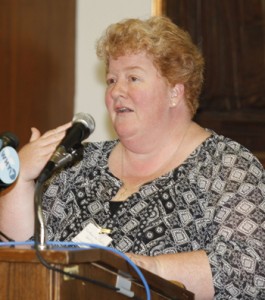 For another consecrated virgin, Katherine Reda of Boston, fellow staffers at the hospital emergency room where she works as a nurse are always amazed that she knows every saint’s feast day and other facts about the church.

It helps that her husband is the boss, of course.

Consecrated virgins are “overflowing with love,” she added, so they are attractive to people as evangelizers in a non-threatening way through everyday situations.

“Sometimes we’re the only Bible people will ever see,” Reda said.

NEXT: Our Lady of the Blessed Sacrament Church closes in West Philadelphia