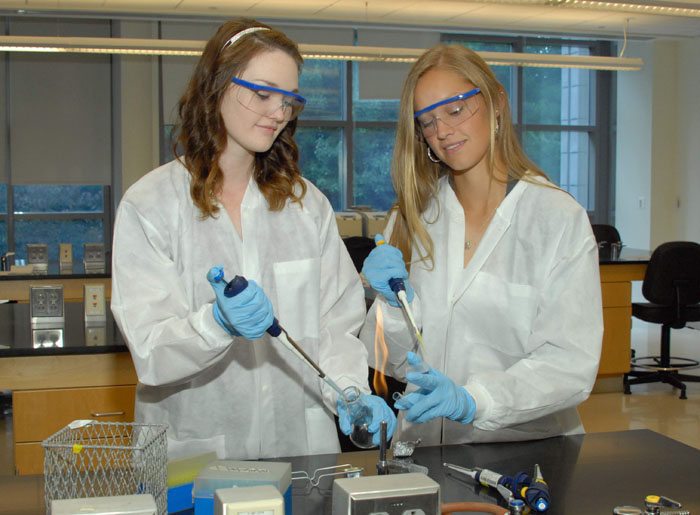 Katrina Terry, left, and Haley Broomell demonstrate the kind of lab procedure they used during bacteriophage research this summer at Neumann University.

Katrina Terry and Haley Broomell, about to enter their sophomore years at Neumann, devoted the better part of their summer to doing scientific research on phages — viruses that infect bacteria.

They collected arthrobacter (a bacteria present in soil) from under trees and near lakes, found and filtered out the phages that were present, and then studied phage anatomy and life cycles. To personalize the work, they named the various viruses they found.

“I learned lab technique, perseverance and how to think like a scientist,” Broomell said of the experience, while her partner Terry added, “I learned about trial and error, and that mistakes might not always be a bad thing.”

Thousands of varieties of phage exist, each of which may infect one or a few types of bacteria. According to David Dunbar, the professor for the course, only 82 types of arthrobacter phages were known before this summer. His students isolated 23 more, increasing the number of identified arthrobacter phages by 28 percent.

The experience also confirmed career paths for Broomell and Terry, both biology majors in Neumann’s Clinical Laboratory Science (CLS) track. Broomell admits that she chose CLS because the major provides a clear pathway to a growing job market. Still, she confessed to having some angst before the summer research course because she “wasn’t sure how much she would like it.”

What happened, in fact, was that both students found their passion. They now know that they can spend hours in a lab, enjoy the work, and be eager for more.

As for the practical applications of knowing more about viruses that infect bacteria, there may be therapeutic potential for treating conditions in people.

Research with phages to treat human bacterial diseases was abandoned decades ago with the advent of antibiotics. With the recent rise of drug-resistant bacteria, however, phages are receiving more scientific attention for possible medical uses.

The class was a pilot course, made possible by the Southeastern Pennsylvania Consortium for Higher Education (SEPCHE). Members of the group’s STEM (science, technology, engineering and mathematics) faculty workgroup developed this summer’s undergraduate research experience and nominated students for the class.

PREVIOUS: Our Lady of the Blessed Sacrament Church closes in West Philadelphia

NEXT: Harrisburg bishop gets hip replacement