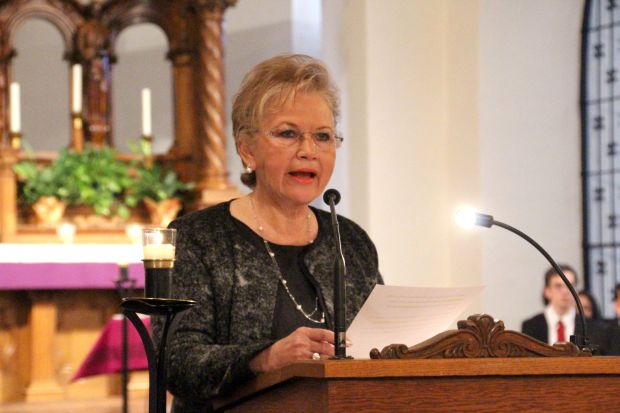 Carmen Bermúdez in her acceptance speech tells the story of the struggle of a Latina woman to start a business and how she was helped by the Sisters of the Blessed Sacrament, one of the first clients of her investment firm. (Photos by Sister Mary Franceline Malone, S.B.S.) 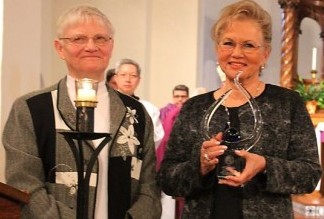 Sister Patricia Suchalski (left), president of the Sisters of the Blessed Sacrament, presents the St. Katharine Drexel National Justice Award to Costa Rican-born Carmen Bermúdez, CEO of Mission Management and Trust Co. in Tucson, Ariz., for her assistance to minorities and women.

The official feast day for St. Katharine Drexel — the foundress of the Sisters of the Blessed Sacrament who devoted her life to the evangelization and advancement of Black and Native American people — is March 3, the anniversary of her 1955 death and entrance into heaven.

Although her congregation celebrates that day among themselves, a more public observation is held annually at their Bensalem Motherhouse generally on the following Sunday. This year it was on March 8, and Archbishop Charles Chaput visited the convent to join the sisters and the public in honoring Philadelphia’s first and only native-born saint.

In recent years the sisters have also used this event as a day to present their annual St. Katharine Drexel National Justice Award to an individual who reflects the values fostered by St. Katharine.

At the presentation ceremony, Sisters of the Blessed Sacrament president Sister Patricia Suchalski, described Bermudez as “a Catholic businesswoman from Tucson whose life reflects the values and visions of Mother Katharine who was also a very, very astute businesswoman.”

Bermudez, a member of St. Thomas Parish in Tucson, is the founder and CEO of Mission Management and Trust, which was established in 1994 to assist companies, religious groups and other nonprofits in the management of their assets. Coincidentally it also devotes a good portion of its own profits to community causes especially through assisting women and minorities to rise above the challenging circumstances of their lives.

Bermudez’s own life is a colorful and remarkable example of rising above poverty and achieving the American dream.

She was born in San Jose, Costa Rica, the third of four children, but her father left the family when she was 2, leaving them in dire poverty. When she was 7, she told her mother that someday she would not be poor. Her mother laughed and asked how this would happen. “I’ll be a bullfighter,” little Carmen said. Her mother laughed and pointed to a field where some cows were grazing, telling her to practice there. 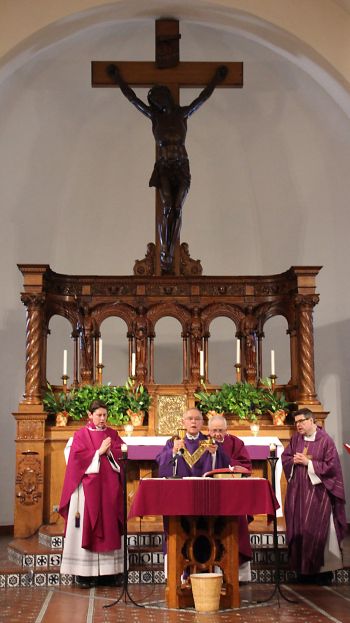 Carmen went into the field and soon found there was also a bull there. He lowered his horns and she ran for her life. But even at that age, she experienced an adrenalin rush she had never known and the memory stayed with her.

She was 15 in the late 1950s when an aunt in California sponsored her mother and herself for immigration and a new life.

She never forgot her childhood love for bullfighting. She took lessons from a friendly professional who did not charge her, and she did become a professional bullfighter with moderate success with bulls and calves, first in Costa Rica and then in Mexico.

One difference: Costa Rica is a country where the bull is not killed; Mexico followed the Spanish tradition requiring the bull to be killed.

Bullfighting is not a typical women’s occupation, but Bermudez observed, “I look at it this way, the bull doesn’t look at you as a man or a woman, a Catholic or Jewish or whatever, and life is that way too. I don’t look on myself as a woman, I look on myself as a person.”

With that said, bullfighting may be exciting but it is not only the bull that is at risk. Eventually, after several injuries, Bermudez hung up her cape and began a second career as flight attendant for T.W.A. from which she retired in 1987.

It was during her travels that she met her future husband, Thomas Feeney, who was CEO of Marathon Asset Management in La Jolla, Calif.  After learning the business through him she struck off on her own to found Mission Management and Trust in 1994. Among her very first clients was the Sisters of the Blessed Sacrament.

“The sisters liked the idea that it was minority owned and also women,” she explained.

Mission Management has prospered to the point where Feeney has merged Marathon Asset Management into it and is now the chief investment officer of the combined company.

Through everything, a goal of Bermudez is “helping people. If I had not been helped by others I would not know what that means.”

She has not forgotten where she came from, but “when you get to the top you have to send the elevator down for others,” she said. 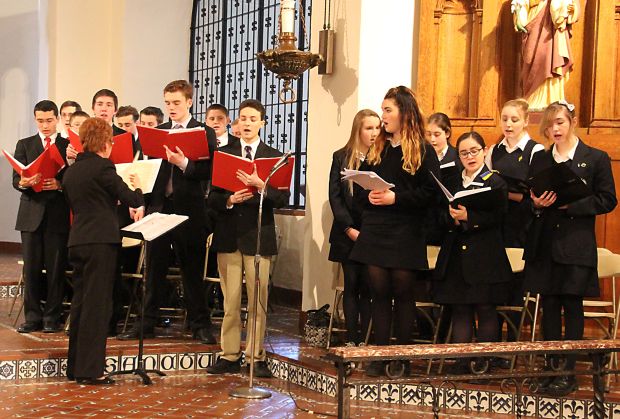 PREVIOUS: Doctor relies on God to witness for sanctity of life

NEXT: In taking up their cross, a family shows gifts from God