No easy moral resolution to Vergara-Loeb dispute over frozen embryos 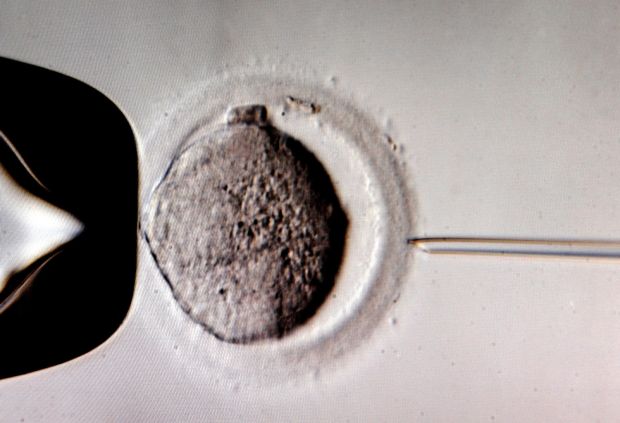 A monitor shows the microinjection of sperm into an egg cell using a microscope at a Leipzig, Germany, in vitro fertilization clinic in this July 2011 photo. Are frozen embryos human beings worthy of dignity and respect or are they property subject to contractual obligations? (CNS photo/EPA)

WASHINGTON (CNS) — Are frozen embryos human beings worthy of dignity and respect or are they property subject to contractual obligations?

That is the legal question surrounding the dispute between actress Sofia Vergara and her former fiance, businessman Nick Loeb, over two female embryos they created in 2013. Loeb, who wants to bring the pregnancies to term using a surrogate, has asked a court in Santa Monica, California, to void an agreement they both signed that the embryos could be brought to term only with the consent of both mother and father.

But from an ethical standpoint, the questions raised by the dispute may not be easily resolved.

The Catholic Church’s stand on frozen embryos, as articulated in the 2008 instruction from the Vatican Congregation for the Doctrine of the Faith, “Dignitas Personae” (“The Dignity of a Person”), comes down firmly on the side of the dignity and worth of the human embryo. But it says the creation of embryos through in vitro fertilization and their later abandonment represents “a situation of injustice which in fact cannot be resolved.”

“The moral objection is first to IVF itself because the dignity of the child calls on parents to procreate that child from an act of their own love,” said Richard Doerflinger, associate director of the U.S. bishops’ Secretariat of Pro-Life Activities. But fertilization of an egg in a test tube “depersonalizes that process and can lead to treating the embryo as a commodity, even as an object,” he added.

In an op-ed piece in The New York Times April 30, Loeb, 39, outlined the reasons for his lawsuit and what he sees as the primary question at issue: “Does one person’s desire to avoid biological parenthood –free of any legal obligations — outweigh another’s religious beliefs in the sanctity of life and desire to be a parent?”

Vergara, who already has a 22-year-old son, Manolo, and is now engaged to another man, has said she thinks Loeb is merely seeking publicity with his lawsuit. She said through her lawyer that she is “content to leave the embryos frozen indefinitely as she has no desire to have children with her ex.”

The Colombian-born Vergara, 42, was raised Catholic and Loeb, whose father is Jewish, was raised in his mother’s faith as an Episcopalian. But, he said in the Times, “it fell to my Irish Catholic nanny, Renee, to raise me. … I spent more time going to Catholic Mass with Renee as a child than being influenced by any other religion.”

But Doerflinger said those of any religion or none can recognize the embryos created in vitro as human beings. He noted that Shinya Yamanaka, a Japanese Buddhist who won the 2012 Nobel Prize in medicine, has said he was moved to develop a stem-cell process that did not involve embryos when he looked through a microscope and recognized that “these could be my daughters.”

“In the IVF industry many parents really do recognize these (embryos) as their children, not just as material,” Doerflinger added. “Clinics may have that dismissive view but many parents do not. … But the law has not caught up with this.”

Loeb said in the Times that his lawyers had identified 10 other court cases in which one parent tried to bring a frozen embryo to term against the wishes of the other parent. “In eight of those cases, the parent seeking custody lost. In the other two cases, one in Pennsylvania and one in Illinois, a woman was awarded custody of fertilized embryos over the man’s objections.”

“Many have asked me: Why not just move on and have a family of your own?” Loeb added. “I have every intention of doing so. But that doesn’t mean I should let the two lives I have already created be destroyed or sit in a freezer until the end of time.”

The most recently available statistics indicate that the creation and storage of frozen embryos is a booming business that continues to grow since the first birth from in vitro fertilization in 1978.

The U.S. Centers for Disease Control and Prevention said preliminary data for 2013 showed that 1.5 percent of all live births in the United States were conceived using artificial reproductive technologies.

The CDC estimated that in 2013 there were 188,121 cycles of artificial reproductive technologies, resulting in 53,270 live births (deliveries of one or more living infants) involving 66,714 live infants. More than one-sixth of the embryos created that year — or 27,564 cycles — were intended for “banking,” or immediate storage, the CDC said.

But hidden in those statistics are the high rates of death for embryos created through artificial reproductive technologies and the health risks to women who are “super-ovulated” to produce a high number of eggs to be fertilized, Doerflinger said.

“In order to get high success rates, many of the clinics transfer two, three, four or more embryos (into the woman) and then offer ‘selective reduction,’ or abortion” of the children who exceed the number wanted by the couple, he said. Many other embryos die in the process of freezing, he said.

Some have proposed that unwanted frozen embryos could be used for research or the treatment of diseases, while others have suggested they be made available to infertile couples or to well-meaning couples who wish to “adopt” the embryos and bring them to term to save them from death. But the Catholic Church has not supported any of those solutions, Doerflinger said.

“According to ‘Dignitas Personae,’ this may be a problem for which there is no fully acceptable solution,” he added.

PREVIOUS: Readings of the holy Mass – The Resurrection of the Lord

NEXT: The great and the small: Film’s tiniest hero has big fun