The great and the small: Film’s tiniest hero has big fun 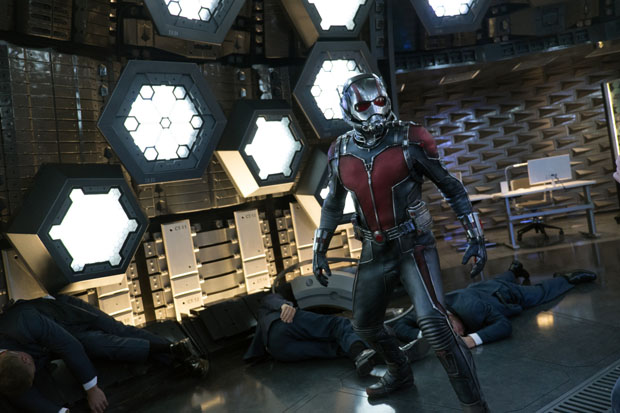 Paul Rudd stars in a scene from the movie "Ant-Man." The Catholic News Service classification, A-II -- adults and adolescents. Motion Picture Association of America rating, PG-13 -- parents strongly cautioned. Some material may be inappropriate for children under 13.(CNS photo/Disney)

Better think twice before squashing that insect invader at your summer picnic — it could be “Ant-Man” (Disney), the diminutive superhero of the Marvel Comics universe.

Shrunk to bug size by means of a special suit, Ant-Man, a.k.a. Scott Lang (Paul Rudd), acquires super-human strength and a nifty ability to control his fellow invertebrates, who bow before their leader.

Ridiculous, yes, but “Ant-Man” is nonetheless great fun, with swarms of creepy-crawlies rendered in glorious 3-D.

Ant-Man technology was invented by Dr. Hank Pym (Michael Douglas), a genius connected to the elite “Avengers” superhero team. Years ago Pym himself wore the suit and crawled around fighting baddies. But age has caught up with him, and Pym seeks a successor.

Just why Pym chooses Scott, an ex-con, is uncertain, although this cat burglar’s knack for breaking and entering certainly comes in handy.

Freshly sprung from prison, Scott is determined to reform his life and earn the respect of his young daughter, Cassie (Ryder Fortson).

“Second chances don’t come around all that often,” Pym tells Scott. “This is your chance to earn that look in your daughter’s eyes, to become the hero that she already thinks you are.”

There’s no time to lose. Pym’s former prot,g,, Darren Cross (Corey Stoll), wants to steal the technology to develop the ultimate weapon to bring peace to our time.

Needless to say, beneath Darren’s flashy version of the suit — nicknamed “Yellowjacket” — lies the beating heart of a megalomaniac bent on world domination — de rigueur for comic book movies.

Hoping an ant can stop a fly, the chase is on. At Scott’s side is Pym’s comely daughter, Hope van Dyne (Evangeline Lilly). When she’s not making eyes at Ant-Man, Hope dreams of wearing the suit herself.

Along for the wild ride are Scott’s jive-talking buddies, led by Luis (Michael Pena). They are amazed by his heroic transformation and likewise inspired to turn away from the dark side.

Part of the charm of “Ant-Man” is its scale and tone. Director Peyton Reed keeps tongue firmly in cheek as he downsizes the usual over-the-top violence of a Marvel film in favor of a clever heist picture, seasoned with plenty of humor and nice messages about honor and redemption.

The climactic battle, featuring a backyard bug zapper and a Thomas the Tank Engine train set, is a far cry from the apocalyptic destruction in this year’s “Avengers: Age of Ultron.” And that’s a good thing.

The film contains cartoonish but bloodless violence, brief innuendo, and a few mild oaths. The Catholic News Service classification is A-II — adults and adolescents. The Motion Picture Association of America rating is PG-13 — parents strongly cautioned. Some material may be inappropriate for children under 13.