No one is excluded from the mercy of God, pope says at audience 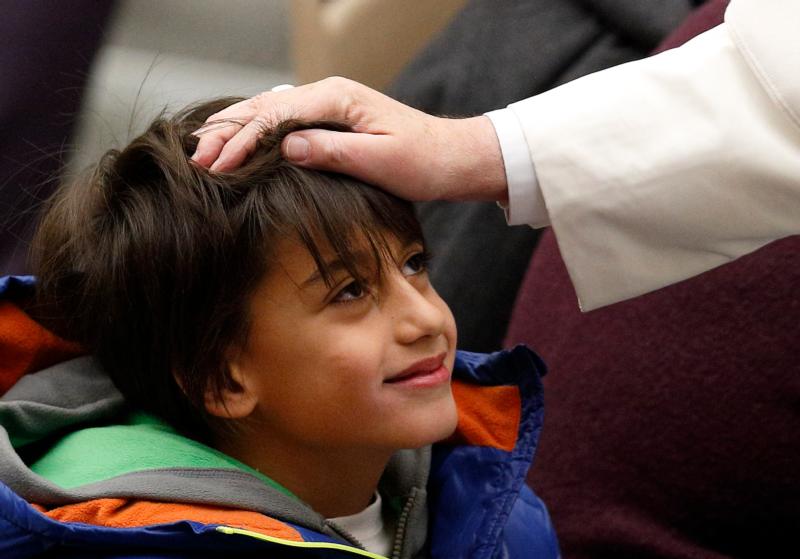 Pope Francis greets a child while meeting the disabled during his general audience in Paul VI hall at the Vatican Jan. 20. (CNS photo/Paul Haring)

VATICAN CITY (CNS) — Catholic, Orthodox and Protestant Christians are called to work together in order to be a visible sign that God’s mercy excludes no one, Pope Francis said during his general audience Jan. 20.

The pope reflected on the theme of the annual Week of Prayer for Christian Unity which was taken from the first letter of St. Peter and was selected by an ecumenical group from Latvia. The Lutheran cathedral of Riga, Latvia, he noted, contains a 12th-century baptismal font that serves as a sign of the common baptism that unites Catholics, Protestant and Orthodox Christians.

“St. Peter’s first letter is addressed to the first generation of Christians to make them aware of the gift received through Baptism and the requirements it entails,” the pope said. “We too, in this week of prayer, are invited to rediscover this and do this together, going beyond our divisions.”

The pope said that although divisions are often caused by selfishness, the common baptism shared by Christians is an experience of being “called from the merciless and alienating darkness” to an encounter with God who is “full of mercy.”

The grace of God’s mercy, he added, is stronger than what divides Christians and in the measure one receives that grace, one becomes “capable of preaching to all his merciful deeds,” especially through a witness of Christian unity.

“We Christians can announce to all the power of the Gospel by committing ourselves to share the corporal and spiritual works of mercy,” he said. “This is a concrete witness of unity among us Christians: Protestants, Orthodox and Catholics.”

Pope Francis emphasized that the week of prayer serves as a reminder that Christians share a common mission in passing on to others the mercy they have received, especially with “the poor and the abandoned.”

“During this week of prayer, let us pray so that all of us, disciples of Christ, may find a way to work together to bring the mercy of the father to every part of the earth,” the pope said.

PREVIOUS: No saint has a sin-free past, no sinner is hopeless, pope says

NEXT: A jealous heart is an ugly, tormented heart, pope says at morning Mass