Sainthood cause for paralyzed priest officially gets under way 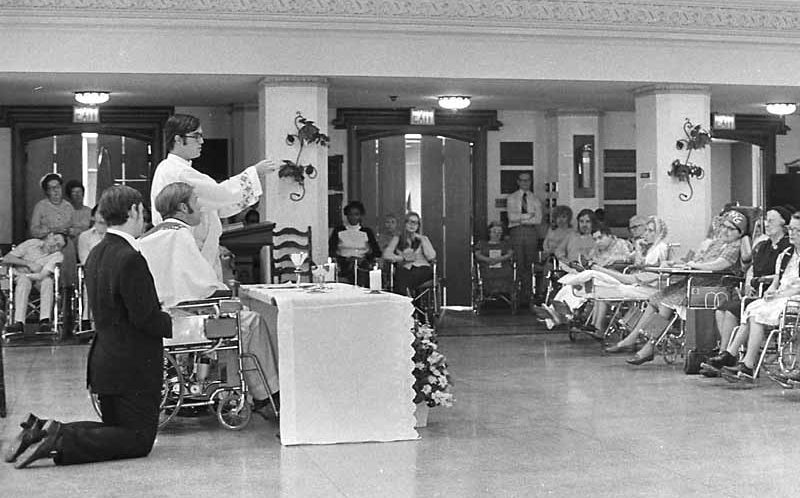 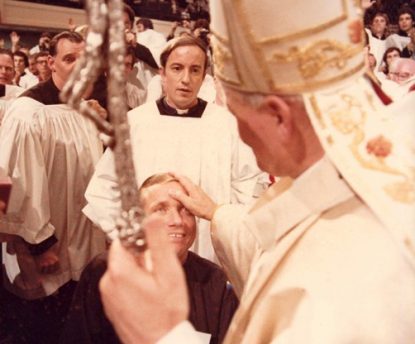 Archbishop Charles Chaput officiated at the formal rite for the beginning of the beatification and canonization process for Augustinian Father William E. Atkinson on Monday night, April 24, the Feast of the Conversion of St. Augustine.

The special Mass and the ceremonies that followed were the first official steps to make Father Atkinson, an Upper Darby native and the Catholic Church’s first quadriplegic priest, a saint.

“This is a moment of extraordinary importance,” Archbishop Chaput said in his homily. “Easter is about shaking things up, about boldness in the proclamation of the Gospel.”

The whole Augustinian community of Villanova University was in attendance and there was standing-room only in St. Thomas of Villanova Chapel, testifying to the great reach and legacy of Father Atkinson’s life. More than 50 members of the priest’s family were present in the front rows of the chapel.

The Augustinian community’s prior provinicial, Father Michael Di Gregorio, believes it was particularly fitting that the process began in St. Thomas Chapel.

“Here at Villanova,” he said, “Father Bill professed his vows as a member of our order; here, he pursued his studies; here, he was ordained to the diaconate; and here, just over 10 years ago, we celebrated his passing into eternal life.”

Amid the celebratory tone of the rites, Archbishop Chaput reminded the gathering that although we take pride in the saints and celebrate their lives, they also present a challenge. “It’s very easy to talk about the saints,” he said. “It’s so much harder to be one. We glorify God through the goodness of (Father Atkinson’s) life, but if we really want to honor God, we must become saints ourselves.”

William Atkinson was baptized at St. Alice Church in Upper Darby in 1946, later attending Msgr. Bonner High School and eventually entering the Order of St. Augustine as a novice. In 1965, while still in formation, he was injured in a near-fatal tobogganing accident that left him almost completely paralyzed from the neck down.

Nevertheless, he endured in his desire to continue as an Augustinian. He compared life to a card game, saying, “You either play with the cards that you have been dealt or you fold, and I am not ready to fold.”

He described his disability as allowing him to witness Jesus in the care he received from others, which assured him “of the Father’s love, turning a stumbling block into a stepping stone.”

In his letter to Pope Paul VI requesting a dispensation to be ordained as a priest, he wrote that his condition called him to be united with our Lord’s cross in an extraordinary way.

Supported by a care team of fellow Augustinians, Bill Atkinson came to the Collegiate House of Formation at Villanova University and professed his solemn vows in 1973. A year later and with the support of Cardinal John Krol, then-archbishop of Philadelphia, almost nine years after the accident Father Atkinson became the church’s first quadriplegic to be ordained a priest after receiving special dispensation from Pope Paul VI.

His first Mass was celebrated at the Fieldhouse at Villanova University, after which he served at Msgr. Bonner High School in Drexel Hill for 30 years as a theology teacher and assistant school chaplain. He was known for his love of life, deep compassion and bright sense of humor. He died in 2006.

Declaring a person a saint typically is a lengthy process in the church. After the local ordinary, the bishop, approves the cause for canonization, the matter is submitted for approval to the United States Conference of Catholic Bishops and eventually to the Vatican’s Congregation for the Causes of the Saints. After its process, it may grant a decree of “no objection.”

The Vatican officially approved the formation of an investigative tribunal into Father Atkinson’s cause for beatification on June 23, 2016.

“A canonization is always exciting, both for the order and the people who knew Father Bill,” said Father Josef Sciberra, the postulator-general for the Order of St. Augustine; his role is the official petitioner for the order’s causes of saints. “Especially now. The ‘preliminary’ part of the process began in 2015, when the prior provincial (Father Di Gregorio) and I presented Archbishop Chaput with the first formal request of the cause. But the real start of things is today.”

Msgr. Sullivan also read the decree officiating all documents as legal and binding, and brought each individual forward to swear on the Gospels to uphold the justice and secrecy of the beatification and canonization process.

Those appointed to the tribunal include: Father Gregory Finn, OSJ, as episcopal delegate; Msgr. Gerard Mesure, the archdiocesan chancellor, as promoter of justice; Father Sean P. Bransfield, the archdiocese’s vice-chancellor, as notary; and Father James M. Oliver as substitute notary.

A “historical committee” of three members was appointed, charged and sworn with gathering materials and documents pertaining to Father Atkinson’s life and its “heroic virtue.” Its members are: Father Joseph Ryan, O.S.A., assistant professor of history at Villanova, as committee president; Dr. Patrick Hayes, archivist for the Baltimore Province of the Congregation of the Most Holy Redeemer; and Dr. Nicholas Rademacher, associate professor of religious studies at Cabrini University.

NEXT: Local Catholics give $300K in aid to Catholic Home Missions