Local Catholics give $300K in aid to Catholic Home Missions 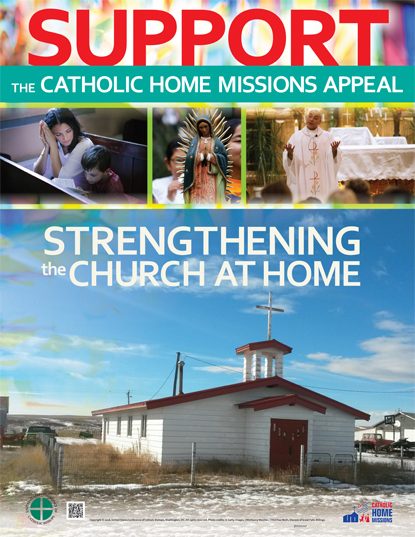 This is the poster for the 2017 Catholic Home Missions Appeal.

While the church’s missionary work often is thought of as happening overseas, there are missions in the United States, too.

The Catholic Home Missions Appeal is an annual national collection that makes ministries possible in isolated, rural and poor dioceses in this country.

His letter noted the rapid growth of Hispanic populations in the U.S. and “the great need to develop and integrate ministries to support them,” he wrote.

That need is present in every diocese but it is particularly acute in the mission dioceses where “fragile financial situations or isolated communities complicate the creation of new ministries.”

Archbishop Etienne wrote that a grant from Catholic Home Missions helped the Diocese of Knoxville, Tennessee establish a council through which “parishioners receive leadership training while learning about resources available to assist them in their ministry. Support from your diocese helps to make ministries like this a reality.”

This year’s collection is expected to be taken up in parishes of the Philadelphia Archdiocese in early May.

PREVIOUS: Sainthood cause for paralyzed priest officially gets under way

NEXT: Where are teen boys going this summer? To Quo Vadis camp