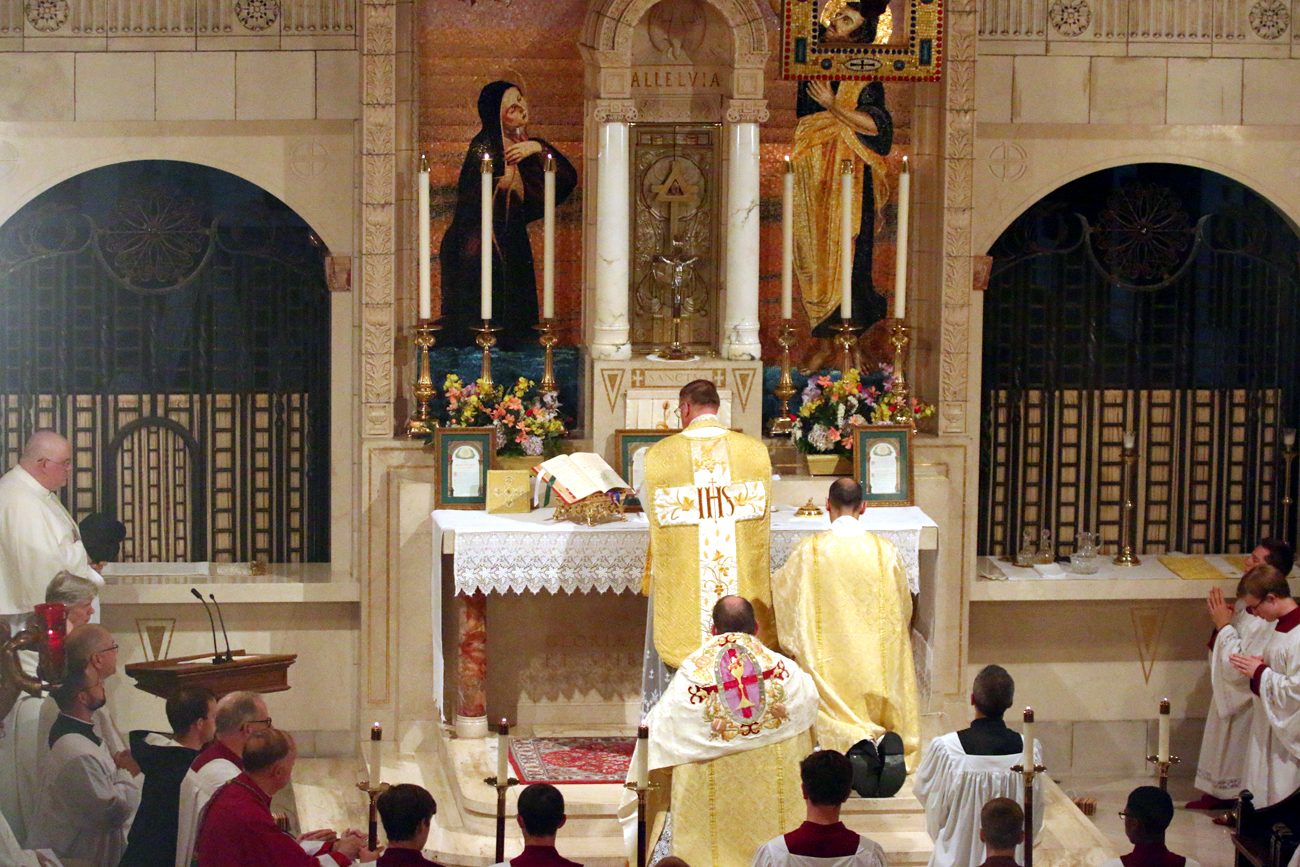 Philadelphia’s Carmelite Monastery of St. Joseph and St. Anne, at 66th Avenue and Old York Road, celebrated the 115th anniversary of its foundation with a Solemn High Mass on the evening of Wednesday, July 26.

The Carmel, which was established by nuns from the Boston Carmel and originally located at 18th and Poplar Streets then at 44th and Spruce Streets, has been at its current monastery since 1910, according to the Prioress, who in keeping with the Carmelite charism does not wish to be named.

The nuns themselves were an unseen presence at the Mass because of their rules of strict enclosure. They only receive visitors from behind a screen.

(See scenes from the Mass in our Photo Gallery, here.)

The Mass was really a double celebration. The Philadelphia Carmel, which was down to three active members, marked the arrival on July 25 of 10 new members drawn from thriving Carmels in Valparaiso, Nebraska in the Lincoln Diocese, and Elysburg, Pa. in the Diocese of Harrisburg, which was itself established by nuns from Valparaiso.

The new arrivals “are all in their 20s and 30s and they are all devout, intelligent and talented, and many were home-schooled,” the Prioress said. “They want an authentic Carmelite vocation. We will have a solemn profession for several of them in January and one is still a novice.”

The Mass was celebrated in the monastery’s beautiful chapel which was designed by Maginnis and Walsh, the Boston architects that later designed the Basilica of the National Shrine of the Immaculate Conception in Washington. The celebrant was the monastery’s new chaplain, Father Scott W. Allen, F.S.S.P. (Fraternal Society of St. Peter).

The Mass itself was in Latin in the Extraordinary Form using the 1962 Missal. It was unlike the typical Ordinary Form Masses that are usually celebrated in a vernacular language using modern translations of the Scripture readings.

The Latin at the Extraordinary Form Mass was straight from the fourth century Vulgate Bible of St. Jerome, with a pamphlet that provided English translations taken from the Douay-Rheims Bible was compiled from 1582 to 1610. 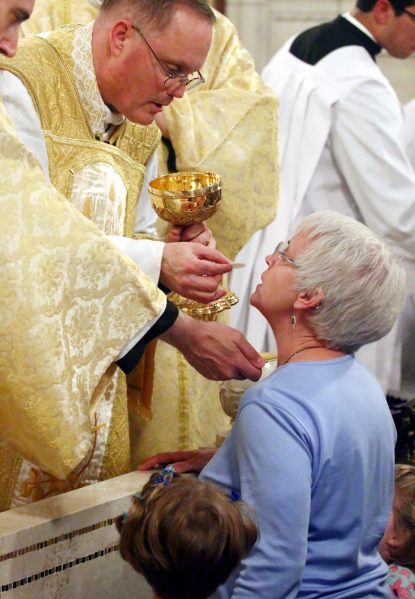 Father Scott W. Allen, F.S.S.P., distributes holy Communion to faithful at the altar rail in the chapel of the Carmelite Monastery July 26.

Such Masses are never concelebrated, but because it was a Solemn High Mass — something none of the attendees under 50 had ever seen when the Tridentine Mass was the norm in the church — Father Allen was assisted by two other priests filling the roles of deacon and subdeacon.

Other priests present were in cassocks and surplices, including Bishop Michael Fitzgerald, who preached a congratulatory homily noting the long history of the Carmelites in Philadelphia.

Although the Mass is also offered in the ordinary form at the Monastery, at times that too is in Latin. Most Masses, now that Father Allen is the chaplain, will be in the extraordinary form because “the nuns prefer it that way,” the Prioress said.

Music at the pre-Mass Concert and during the Mass was beautifully provided mostly in Latin by Constantia, a small group from Holy Angels, the nearby Korean Catholic parish.

“They are really good,” the Prioress said. “They are all professionals, all men except one female one who is our dentist. They practice every week and they love to come here. The acoustics are excellent and the chapel is beautiful.”

The chapel was filled to overflowing for the Mass and spilled over to an outdoor seating area where it was followed via a large television screen.

Some of the faithful are regulars. Bob Nemo of St. Cecilia Parish in Philadelphia often serves as an usher. “I’ve been helping here for years,” he said. “It’s wonderful they are bringing in 10 more nuns.”

Elizabeth Feeney, a young adult member of Our Lady of Consolation Parish in Philadelphia, said, “I saw this on Facebook and brought my mom. We came in honor of our aunt who passed away. I’ve only been to one Solemn High Mass before. The ritual is beautiful.”

Jeanine Haines of St. Jude Parish in Chalfont, who attended with her son, his wife and their four little children, knows one of the sisters from Elysburg. “It’s wonderful for the Carmel to have new life,” Haines said.

While the number of worshipers was larger than normal for the special Mass last Wednesday, large numbers also attend at other times especially on the Feast of Our Lady of Mount Carmel and for devotions surrounding St. Therese of Lisieux, the most famous modern Carmelite saint.

The monastery also has custody of first class relics of St. Therese and her parents, Saints Zelie and Louis Martin, which are on loan by the Magnifcat Foundation, although at times they travel to other dioceses.

Whether it is for special occasions, Masses or devotions to the Carmelite saints, Philadelphians do come year-round and are always welcome. The makeup of the visitors has changed over the years, according to the Prioress.

“Once it was predominantly Irish,” she said. “Now they are Haitians, Filipinos, all kind of people.”

Wherever they come from, they are welcome to this quiet gem of prayer in Philadelphia where day after day, year after year this small band of religious women live out the hidden life, all for the greater honor and glory of God.