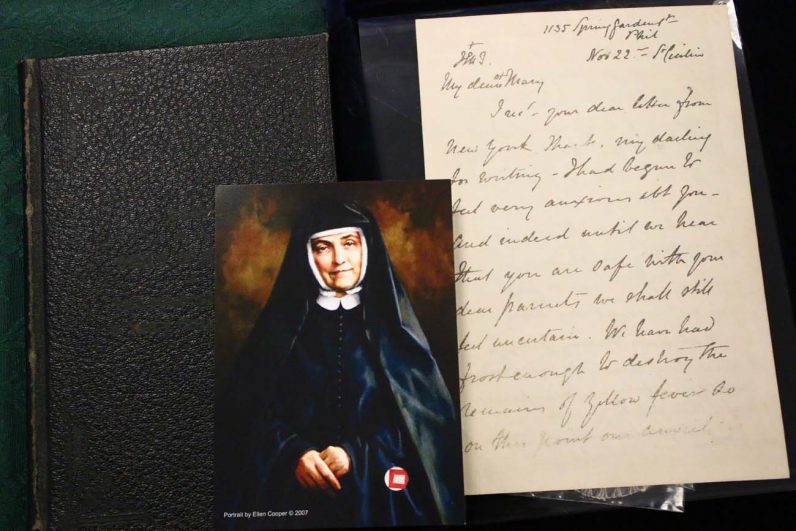 Artifacts from Venerable Cornelia Connolly at Rosemont College’s archives include a letter from Cornelia to her sister, Mary. (Photo by Sarah Webb)

You may know a lot about St. Katharine Drexel, Philadelphia’s first native born saint. How much do you know about Venerable Cornelia Connelly (1809-1870), who you might say is a saint in waiting?

Like Katharine, Cornelia was born in 19th century Philadelphia and founded a religious congregation of women, the Society of the Holy Child Jesus, which continues to this day. But she could probably best be compared to America’s first native-born saint, Elizabeth Ann Seton, a Catholic convert who was married and had young children when she entered religious life.

Unlike St. Elizabeth, who was a widow when she entered religion, Cornelia was also a convert but was married yet legally separated from her husband Pierce Connelly when she founded the Holy Child Sisters. She remained married but separated until her death. Hers is quite a story.

That family was Episcopalian and through this connection she met a young Episcopal cleric, Pierce Connelly, a curate at Philadelphia’s Christ Church. The two fell in love, Cornelia joined the Episcopal Church and they married in December 1831.

The records suggest her sister Isabelle did not approve of this, and later developments suggest she may have had a point.

After their marriage Pierce accepted an assignment to a small rural parish in Natchez, Mississippi. It was a good marriage and over the next decade produced five children, two of whom died, something so very common in past generations.

In the meantime the Anglican Communion, including the Episcopal Church in America, was being rocked by the Oxford Movement in England that sought to return Anglicanism to its traditional liturgical and in some aspects theological roots in Catholicism.

Pierce resigned from the Episcopal priesthood in 1835 and it wasn’t long before both became Catholic, first Cornelia, then Pierce. They lived in Louisiana and abroad for several years while Pierce pursued a seemingly impossible goal of ordination as a Catholic priest, something unheard of for a married man at that time. 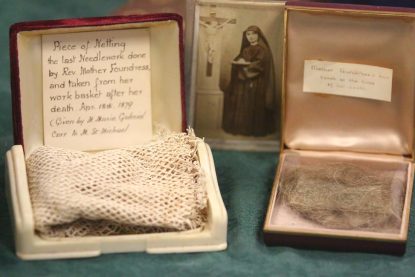 The Rosemont College archives hold several artifacts from Venerable Cornelia Connolly, including a portion of the last needlework she created (left) and a lock of her hair. (Sarah Webb)

Finally he hit upon a dramatic solution. If he and Cornelia would agree to live celibate lives apart, Rome might permit his ordination. Cornelia loved her husband and it was with great reluctance that she consented to Pierce’s plan if it was his wish and the church permitted it.

It was not until 1844 that final permission for Pierce to become a Catholic priest was given, provided both would agree to a legal separation and he take the promise of celibacy required of a secular priest, and she the vow of chastity of a nun. Nevertheless they remained lawfully married until her death.

As part of the separation agreement their eldest child was placed in a Catholic boarding school and Cornelia took residence with the younger children with the Society of the Sacred Heart. It was her intent to possibly enter that congregation when the children were old enough to go to a school.

In the end, she decided at the request of Pope Gregory XVI to found her own congregation and, inspired by her own children and the Holy Spirit, it would be the Society of the Holy Child Jesus.

Interestingly her own sister, Mary, to whom she was very close, also became Catholic and did enter the Sacred Heart Sisters with most of her ministry in convents in the Philadelphia area, including Eden Hall.

As Pope Gregory desired, Cornelia’s new order would be based in England where the faith was growing and there was a need for Catholic schools. Well-to-do English Catholics were sending their daughters to convent schools on the continent, where too often they met eligible bachelors and married there.

With the assistance of Bishop (later Cardinal) Nicholas Wiseman a first foundation was made in Derby, an industrial town in southern England. Later it was transferred to St. Leonard’s-on-Sea where Cornelia would remain for the rest of her life as her congregation grew and flourished.

Her greatest headache was Pierce. While she was in Rome he was permitted weekly visitation, but in England Bishop Wiseman did not think that advisable and forbade the visits.

When Cornelia would not see him he became furious and took the children and placed them in private schools, not even allowing them to read the letters she sent. This was definitely the greatest sorrow in her life.

Ultimately Pierce left the Catholic priesthood and returned to the Episcopal Church. He then tried to force Cornelia to come back as his wife. At this point Cornelia, who had entered a convent initially to please him, stood her ground and refused.

He sued her in the English courts for loss of consortium and incredibly in that era when women had few rights, he won in the lower courts but when she appealed he reluctantly gave up the fight.

To her great sorrow, through Pierce’s spitefulness, Cornelia never had contact with her children for many years and never saw their eldest child again.

Pierce would live a long life, spending his last decades bitterly anti-Catholic as an American Episcopal pastor in of all places, Italy.

There were other obstacles. Cornelia did not always see eye-to-eye with bishops and priests who did into agree with this strong American woman who had her own ideas and methods. She would not back down when perhaps they attempted to convert her Sisters in their diocese into a diocesan congregation, rather than an international one.

One bishop wrote to her complaining that he was informed girls were being taught to dance at the school and asked if she could have it stopped. What he didn’t know, it was Cornelia herself who conducted the dance class. Another bishop when writing to a confrere, referred to Cornelia as “that incorrigible woman.”

Even Bishop Wiseman, her early protector, at times had to accede to her wishes. At one point he asked that a set of rooms at St. Leonard be set aside for his use. She refused, pointing out the possibility of scandal that could result from such an arrangement, especially because of the bitter Connelly vs. Connelly suit.

In time her congregation spread and she revisited Philadelphia and the former St. Leonard Academy which opened in Philadelphia.

Her schools were an interesting mixture of academies for the affluent and humbler neighborhood schools that were partially funded through the academy tuitions.

“The fact that she was both a mother and a wife may have made her approach in her school quite different,” observed Sister Roseanne McDougall, the archivist of the North American Province of the Holy Child Sisters.

As for the paradox as to why Pierce Connelly turned so vindictive after clearly being a loving husband, it has been suggested he may have had bipolar disorder, she said.

Most of the local ministries established by the Holy Child Sisters are no longer operative, and those remaining have mostly lay leadership including Rosemont College, Rosemont Holy Child School at Rosemont and Holy Child Academy, Drexel Hill.

At the end of the day saints are recognized not just for their sanctity bur for their ability to be role models.

For Emily Siegel, a recent Rosemont graduate and the assistant in the archives at the college, Cornelia resonates today “because she was from a broken family. Many things in her life can apply to young people today,” she said.

But being a pioneer in education and a woman who refused to accept the then prevailing notion that members of her sex must be subservient to men is not the whole story. Pierce may have planted the seed for Catholic conversion into her head, but of the two, she was received into the church first, and she adamantly resisted any temptation from him to renounce her religious vows.

“The will of God is the only happiness and the only thing worth living,” for,” she once wrote.

“She lived this for the rest of her life,” said Holy Child Sister Carlotta Bartone, who is the postulator for Cornelia Connelly’s cause for canonization, which was not officially opened until December 1959.

“In 1992 Cornelia was declared venerable, and it is hoped she will someday be canonized,” Sister Carlotta said. “Please report any prayers answered or favors received through the intercession of Cornelia to the Society of the Holy Child Jesus, 1341 Montgomery Avenue, Rosemont, PA 19010.”