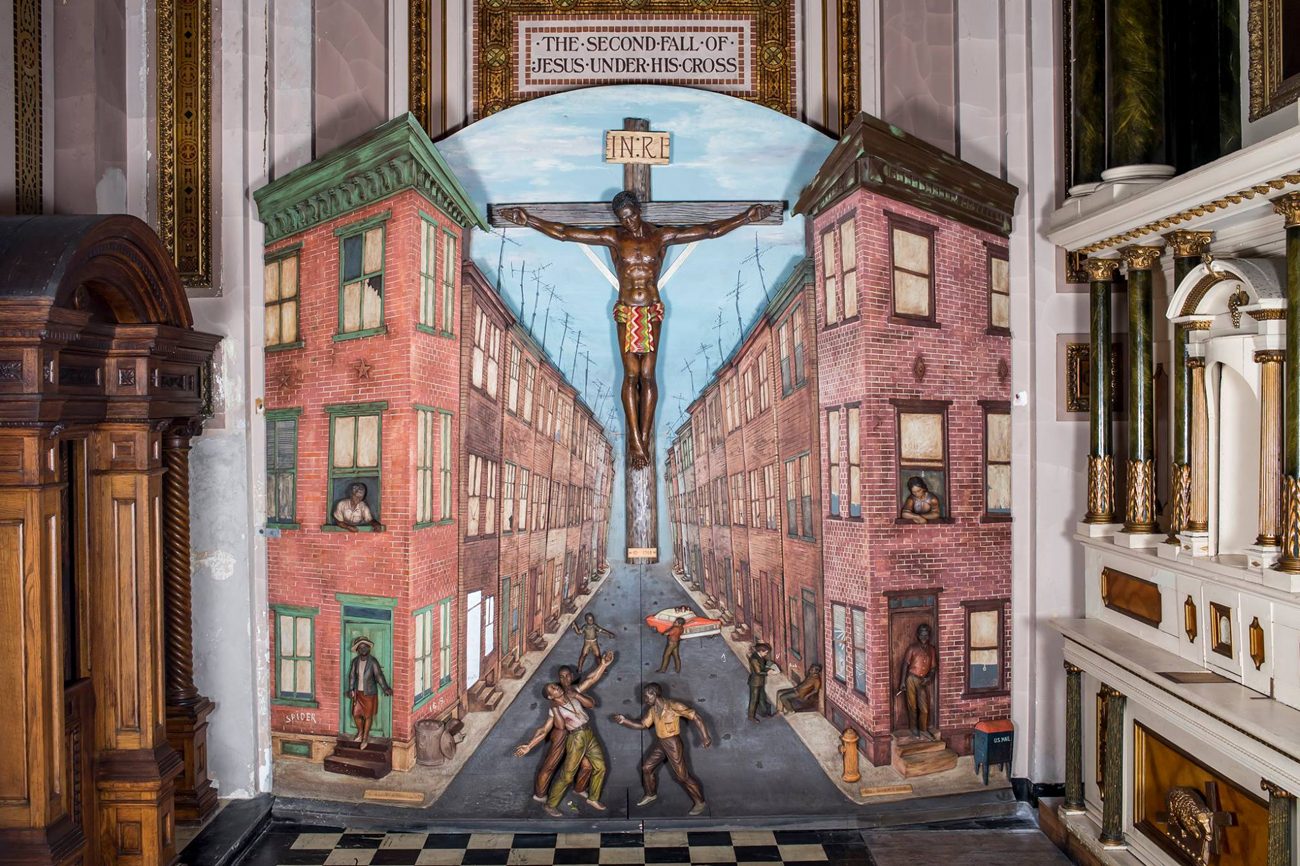 "Christ of North Philadelphia" is a tableau installed at Church of the Gesu in 1968, and recently rediscovered and rededicated April 19 at the current chapel of St. Joseph's Prep and Gesu School, North Philadelphia.

St. Joseph’s Preparatory School in North Philadelphia conducted a rededication Thursday evening, April 19 of a unique tableau sited at a side-altar alcove in the rear of the former Church of the Gesu.

The church of the parish that closed in 1993 is now the chapel for St. Joseph’s Prep and Gesu School, which is now a private Catholic elementary school.

The tableau, titled “Christ of North Philadelphia,” is carved from wood and it is approximately 15 feet high and 12 feet wide. It allegorically depicts a street scene of the neighborhood with its most prominent feature, the crucified Christ, as an African-American man on a cross with the vertical section resembling a telephone pole.

The tableau was conceived by the late Jesuit Father Ralph C. Campbell, an assistant pastor at Gesu, and erected in 1968 to show that “Christ died for all men regardless of race,” according to an explanation given at  that time. “The street scene demonstrates how Christ is crucified anew in man’s sinful actions and in the social evils of our times; how salvation comes to all men by uniting their sufferings in Christ.”

The tableau was a commissioned work executed by two brothers, Spanish artists Santiago and Jesus Rivas. It was paid for by Thomas Pesci, the father of Jesuit Father Thomas Pesci, according to Conners.

The tableau, which received widespread publicity after it was erected, remained in place for approximately 20 years and then was stored elsewhere in the church. Its most prominent feature, the large crucifix, was then loaned to St. Ignatius Church in Baltimore and just recently returned to Gesu.

The whole presentation is unique in that Christ appears twice, most recognizably in the large crucifix, but also symbolically as a figure in the background tableau.

The elements of the carved and painted tableau need explanation. It represents a street scene in the North Philadelphia neighborhood and  the street itself is lined with three-story houses, built in more prosperous times in that section of the city but now mostly broken down into smaller apartments.

Some of the smaller figures carved in the tableau are unnamed. There are children playing, a gang fight and bill collector (usually known as a debit man) making his rounds as the only white person in the display.

The larger figures were given names and descriptions by Father Campbell.

Mary: the woman exiting a house on the left with a prayer book in her hands as she heads to church; she represents all that is good in the neighborhood.

Peter: the elderly man above Mary looking out the window. He represents the elderly, too old to move and living on a small income in a second-story apartment.

John: the man in the doorway on the right represents a young adult with few prospects.

Sarah: the woman above John on the right. A modern-day mother who looks out at the neighborhood and wishes things were better for her children.

Christ: the central figure with outstretched arms has been stabbed. He represents all that is good in the people of the neighborhood.

Cain: the man with the weapon who kills his brother represents all that is evil in the neighborhood.

Judas: the man holding Christ. He didn’t kill him but made it easier for others to do so.

The entre tableau is remarkably well preserved, considering its age of 50 years and time in storage. The only element missing, according to Conners, is the knife that was held by Judas. It is hoped another one can be carved.

Also, he notes the tableau could aided by a professional cleaning.

A drawback for its location at the rear of the church is that the area is not well lit, which may be why it did not attract much notice after its initial years.

For the rededication ceremony temporary lighting was rented, and Conners hopes new, permanent light can be installed.

It would be well worth it. The lessons from “Christ of North Philadelphia” are just as relevant today as they were a half-century ago.