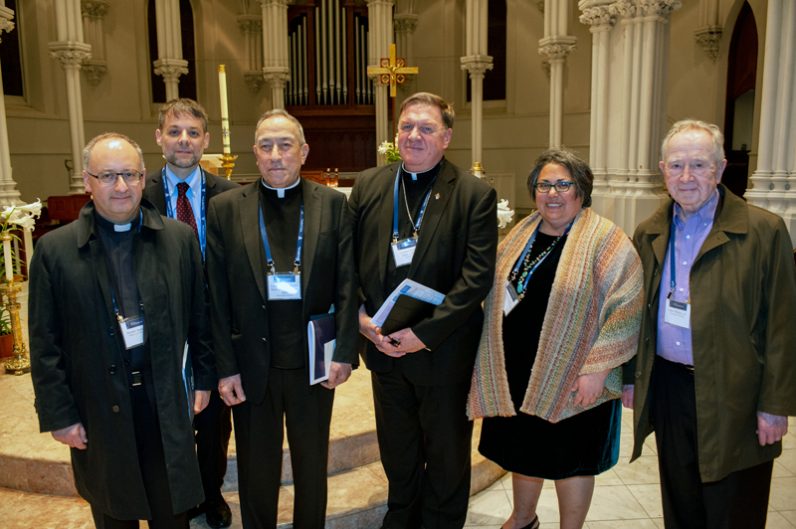 Keynote speakers for the conference, “Pope Francis: A Voice Crying Out in the World,” shown in St. Thomas of Villanova Church on the campus of Villanova University where the April 13-14 event was held, include (from left) Jesuit Father Antonio Spadaro, Massimo Faggioli, Cardinal Oscar Rodriguez Maradiaga, Cardinal Joseph Tobin, Michele Pistone and Jesuit Father John O’Malley.

A conference featuring 60 speakers from around the world met April 13-14 at Villanova University to assess the impact of Pope Francis, now five years into his pontificate.

Some 150 participants heard talks by Catholic prelates, theologians and lay experts in such diverse fields as economics, church history, social justice and the environment who are studying Francis’ vision for the church and how it is being received.

The conference, titled “Pope Francis, a Voice Crying Out in the World: Mercy, Justice, Love and Care for the Earth,” focused in particular on how the pope has expanded the goals of the Second Vatican Council. 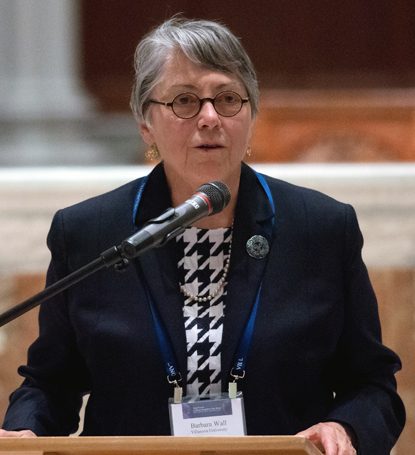 Barbara Wall, vice president for Mission and Ministry at Villanova University and an organizer of the conference examining the first five years of Pope Francis’ pontificate, delivers the opening address of the conference Thursday, April 12 at St. Thomas of Villanova Church on the Villanova campus.

The pope has challenged the church, rather than changed its teaching, said Barbara Wall, whose Office for Mission and Ministry at Villanova organized the conference. Through a “radical embrace of a church for the poor,” Pope Francis calls for a “return to the values of the Gospel, the values of mercy, justice, love and care for God’s creation,” Wall added.

Pope Francis’ interpretation of Vatican II “is the most important event in church history in the last four centuries,” said conference co-organizer and Villanova professor Massimo Faggioli, who has written extensively on the pope since his election.

Rather than rolling back Vatican II, the pope believes it is essential to orient the Catholic Church “in the world of today,” and to recover “the missionary dimension of the church,” Faggioli said.

He believes Francis already has left what he called “important legacies,” although the popular pope is facing opposition – most acutely from within the United States.

Faggioli cited issues the pontiff has raised over the past three years, including care for the environment and pastoral practices concerning married couples and family life. These have met with resistance in the U.S., due to what Faggioli believes is “a very active Catholic media system.”

Yet Pope Francis “is actually much less controversial” worldwide than he is perceived to be here, Faggioli said, noting that “outside of America his papacy is much less criticized.”

Some of the uneasiness over Francis may be traced to his use of unorthodox and often folksy language to reach his audience, especially youth. Faggioli finds this fresh communication style unsurprising, given that youth have become disillusioned with a church mired in 15 years of child sexual abuse scandals. 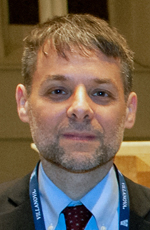 “With young people, he’s a visible embodiment of something that they still care about, more than the (institutional) church,” Faggioli said. “I’ve heard many times people say the church is ‘that,’ but he is … different.”

While acknowledging that Francis’s message at times is “risky,” Faggioli notes that detractors who accuse Francis of radically changing the church “don’t have a theological case.”

In Francis’ view, the church’s mission of helping a person develop a mature conviction of Christian faith is more important than perpetuating a “punishment and reward system,” Faggioli said.

He echoed one of the conference’s talks by Jesuit Father John O’Malley, an eminent scholar of Vatican II and a professor at Georgetown University.

Historically, and especially with the 13th century church scholastics, councils had developed doctrine based on Roman legislative procedure, setting out laws and penalties for noncompliance with them. Church laws, or canons, dealt with Christians’ behavior, not the motivations for their actions, or the formation of their consciences.

At Vatican II, no new canons were issued, which was “a clue that something extraordinary was happening,” Father O’Malley said.

Rather than developing new laws to “isolate the church from external contamination,” the council gathered bishops from all over the world who were “more intent on offering guidance for all … in the pursuit of holiness,” said Father O’Malley.

The council, according to Father O’Malley, principally taught that what God revealed in Jesus Christ was a person, and the church’s mission was to help increase people’s faith in him.

The universal call to holiness, which respects the dignity of conscience and engages with the world, resonates strongly with Pope Francis, said Father O’Malley.

Cardinal Joseph Tobin of the Newark Archdiocese opened the conference with a talk that framed the pope’s connection with Vatican II, asking whether the church should flee the world or become its field hospital. He asserted that the latter is its true mission, using the pope’s popular image of a church that mercifully cares for those wounded on the world’s battlefield.

Cardinal Oscar Rodrigues Maradiaga of the Tegucigalpa Archdiocese in Honduras spoke on Francis’ impact as the world’s first Latin American pope, an aspect explored by several conference speakers from Africa and other points in the global South.

In one address that set the audience abuzz, Columbia University economist Jeffrey Sachs delved into “Laudato Si’,” in which the pope examined not only environmental stewardship, but also the consequences of economic choices on the world’s poor.

Sachs argues that market economies will not inherently promote the common good of all, so they need a moral framework such as that provided by Catholic social teaching.

Catholic author Austin Ivereigh weighed in on Francis’ vision of ecclesiology, or theology of the church. He outlined three ways the pope is developing his vision for the renewal of “God’s holy and faithful people.”

The pope has frequently denounced clericalism, which Ivereigh defined as a “self-isolation and alienation from the people of God” by clergymen and some lay people, whom he called an “ecclesiastical lay elite.”

Francis is also trying to evangelize popular culture as an “expression of faith,” Ivereigh said. The pope stresses the need for the church to be in touch with the faith of ordinary people, and he “is inviting the church to do this, especially with the poor, and to put them at the center of the church.”

The pope also expresses the “missionary potential of people who have accepted God’s mercy rather than a program of the institutional church,” Ivereigh said.

PREVIOUS: Miracles on the menu: Cooking leads to new life for at-risk youth

NEXT: Lost for years, ‘Christ of North Philadelphia’ returns to Gesu Church