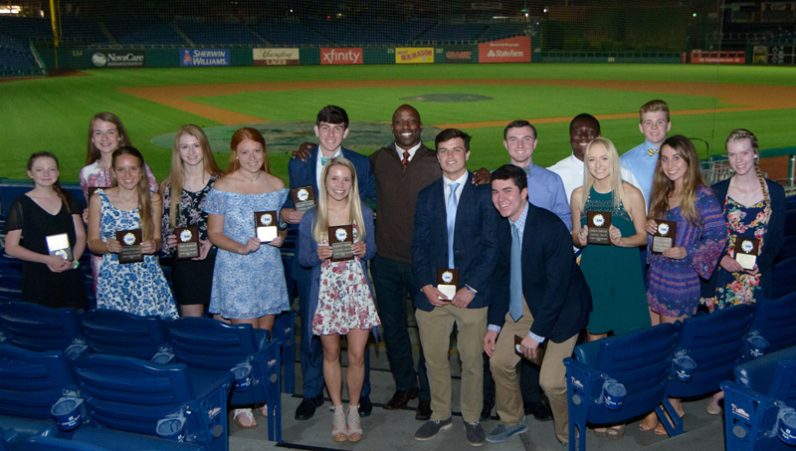 Former Philadelphia Eagle Jason Avant (center) poses with some of the Catholic Athletes for Christ honorees May 17 at Citizens Bank Park, Philadelphia.

Catholic Athletes for Christ (CAC) has taken the field in Philadelphia. The national organization, which says it “serves Catholic athletes in the practice of their faith and shares the Gospel in and through sports,” has been present in a number of Catholic dioceses since 2006 but is relatively new to this archdiocese.

Although CAC includes athletes ranging from professionals to collegians to high schoolers, the local kick-off event held May 17 at the Diamond Club at Citizens Bank Park recognized local high school athletes with the Courage Award for their leadership in sports and as models of faith.

Catholic events in Philadelphia wouldn’t be complete without former Eagles General Manager Jimmy Murray as master of ceremonies and because it was at Citizens Bank Park, that fellow with an unusual complexion, the Phillie Phanatic. 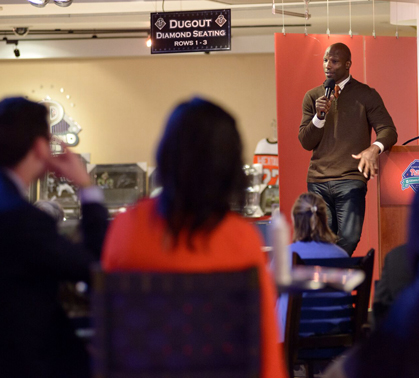 Jason Avant, a former Philadelphia Eagles receiver, speaks to student athletes, their parents and other guests at the Catholic Athletes for Christ gathering May 17 at Citizens Bank Park in Philadelphia.

Managing the event was Alex Haynie, a theology teacher at Malvern Prep who is also the Philadelphia region director for CAC.

On the national level the Philadelphia region is represented through Archbishop Charles Chaput as a member of the CAC’s Episcopal Board and local lay Catholic leaders including James Delaney as the Vice President and Dr. Tammy Tenaglia on the Board of Directors.

“This was our first Courage Award in Philadelphia, although it has been done in other places,” Haynie said. “There is a growing need for a Catholic sports ministry that shares the Gospel of Christ through athletics.”

The hope is that chapters of CAC can be developed in the individual schools, as well as archdiocese-wide events. Other events that might develop over time, according to Haynie, are a leadership retreat day, a basketball tournament and a summer camp program for middle school kids.

Everyone involved with the May 17 event deemed it a success, according to Haynie. The student athletes found Jason Avant’s words inspirational, and in turn the students’ own accomplishments off the playing field for which they received the Courage Award were equally inspiring. 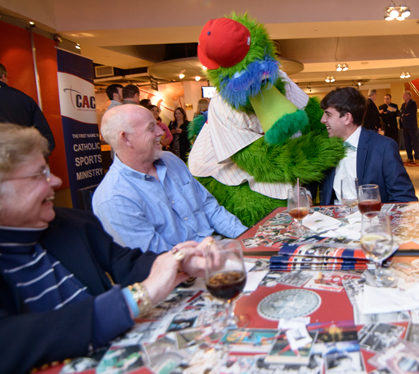 The Phillie Phanatic hams it up with Catholic Athletes for Christ honorees and their families.

“Some are going on mission trips to Africa and the Dominican Republic, some are tutoring younger students, volunteering at CCD, or volunteering at shelters for abused women, working at Special Olympics or raising funds for cancer research,” Haynie said.

“Overall, I thought the night was awesome,” said Malvern Prep athlete Evan Lotz. “It was really inspiring to hear some truly inspirational stories and it was great to meet a bunch of awesome people who share the same goal of spreading the Gospel through athletics.”

The Courage Award winners include:

For more information on Catholic Athletes for Christ visit the website CatholicAthletesforChrist.org. 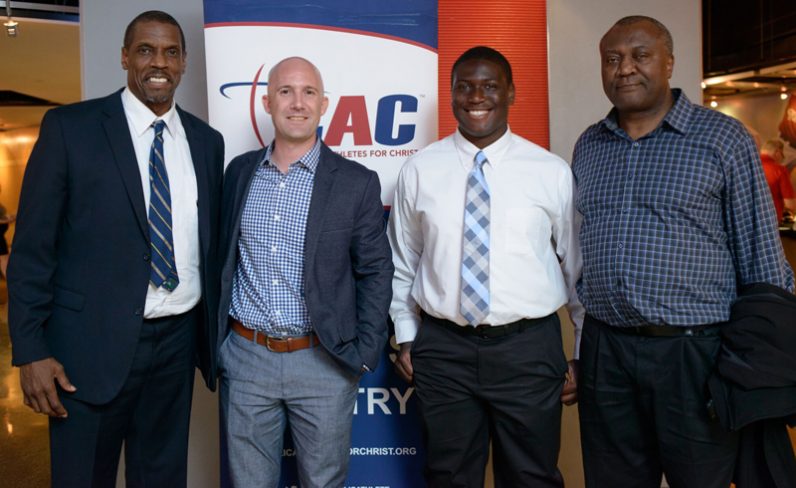