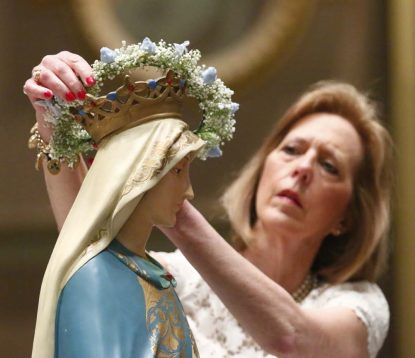 A statue of the Blessed Mother is crowned at a 2017 May procession held at the Cathedral Basilica of SS. Peter and Paul in Philadelphia. (Photo by Sarah Webb)

Raised as a Protestant, Sara Jane MacArthur encountered an unexpected spiritual mentor during her college years: the Blessed Mother.

“She was really instrumental in my conversion to Catholicism in 1963,” said MacArthur, now a parishioner of St. Monica Parish in Berwyn. “I’ve been devoted to her ever since.”

MacArthur shared her story at a May 23 discussion on Catholic belief about Mary, hosted by St. John the Baptist Parish in Bridgeport.

“The purpose of this event is to get Catholic lay people comfortable with talking about their faith,” said Steve Lukens, a member of the group and a convert to Catholicism. Lukens’ wife, Edel, had arranged the talk.

MacArthur freely shared the details of how Mary shaped her journey to the Catholic faith, noting that her family had belonged to several Protestant denominations, depending on where they were living at the time.

“I went through the instructions,” she said. “I attended Sunday services, Sunday school, and I thought ‘there’s something more’.”

While studying at St. Joseph’s University (then St. Joseph’s College), she confided in a fellow student that she was curious about Mary. The student introduced her to a priest, who invited her to join him for a few sessions on Catholic belief.

It was in the fourth session — the one on Mary — that MacArthur experienced a dramatic personal revelation. “It was like an interlocution,” she said. “I was sitting there listening … and I actually had a sensation go right across my forehead; I can still feel it. I sat there in shock.” She decided to become Catholic after that session.

MacArthur’s devotion to Mary has continued to flourish. In her talk, MacArthur focused on Mary’s role as the mother of God who became the mother of all through Christ’s proclamation from the cross: “Woman, behold, your son … Behold, your mother” (John 19:26,27).

Following the presentation, attendees engaged in a lively discussion about Marian devotion. The topic was an especially significant one for the community of St. John the Baptist. The parish is comprised of two former Anglican parishes that merged earlier in the decade under the Personal Ordinariate of the Chair of Saint Peter, the North American diocese created by Pope Benedict XVI for Anglican parishes seeking full communion with the Roman Catholic Church.

Almost all of the participants shared a reflection on their understanding of Mary as mother. Peter Creciun observed that the practice of Marian consecration recommended by St. Louis de Montfort has been highly effective.

“I feel like I’ve seen a lot of fruits in my life,” said Creciun, who attends Sacred Heart Parish in Swedesburg.

“I want to get better at evangelizing and saying this is what I believe and why I believe it,” he said.

NEXT: As school winds down, kids learn to eat their veggies, and like them