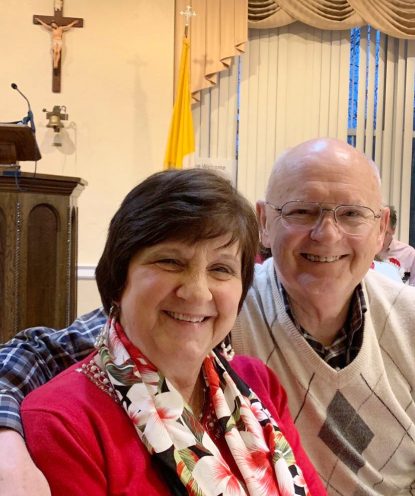 Michele and John Doman, of Visitation B.V.M. Parish in Norristown, cite their relationship with Jesus as the key to their 50 years of happy marriage.

Michele and John Doman epitomize Matthew 7:16, “by their fruits you will know them.” The couple, who celebrated their 50th wedding anniversary in August, contributes to numerous ministries while actively participating in the lives of their 10 children, 48 grandchildren and one great-grandchild.

“It’s been an exciting journey,” said John in his home in Visitation B.V.M. Parish, Norristown.

From hosting rosary prayer groups and small faith-sharing groups in their home to leading courses focused on marriage and parenting, the Domans focus on developing a personal relationship with God and growing in fellowship with those following him.

Michele and John could not have known all this was in store for them when they first met at Michele’s sister’s wedding. John fell in love at first sight, but “it took Michele some convincing,” he said with a smile.

Michele, a daily communicant since age 11, was actively involved in her faith. While John was not as attached to his Catholic roots, he knew faith was important to Michele and he began going to daily Mass with her. Although he wasn’t living his faith with the same commitment as Michele, she was impressed that he was trying to deepen his faith along with her.

“Other guys I dated tried to lead me away from God and down another path,” Michele said. “He appreciated my devotion to God.”

As a newlywed couple, they befriended a Protestant minister who invited them to a four-day Bible conference. It was there that John gave his heart to Jesus for the first time in his adult life, and the Domans made a commitment to living biblically as a married couple.

Michele and John agree that the conference brought them closer to the Catholic Church, which they believe deepens one’s relationship with Jesus.

The seeds planted at this conference would bear abundant fruit. In their new commitment to God and the church, they found fellowship to be essential. Once John and Michele began hosting small groups in their home, they found these weekly meetings crucial to their prayer life.

Making sure their children were also involved in the faith was a priority. The family joined House of God’s Light, a community dedicated to supporting and living a radical Christian life. They formed strong relationships with others and participated with Villanova University students in biweekly group prayer, shared meals and outreach projects.

While in this community, John and Michele found what would be perhaps their most prolific ministry tool: Alpha. The ecumenical adult education course is designed to explore the Christian faith and life’s big questions. It includes a meal, a talk and time to break into small discussion groups.

After running the course in their home, Michele and John brought the program to their parish, Visitation B.V.M., and nearby St. Eleanor Parish in Collegeville.

“Alpha has sparked so many other ministries,” said Michele, including Bible study sessions at Visitation Parish. Michele and John lead the Marriage Course, a program affiliated with Alpha and designed to strengthen relationships.

They also both currently volunteer in Alpha programs at Montgomery County Correctional Facility, where they help facilitate the course and are on the intercessory prayer team for inmates and their prayer intentions.

“(Jesus said) ‘I was in prison and you visited me.’ It must be a pretty big priority for our Lord if he mentions it by name,” John said.

It appears the Lord certainly has blessed this ministry. Michele and John have seen inmates’ attitudes shift over time and their lives transformed, to the point where they continue their own prayer groups after the Alpha course ends. In this ecumenical group, people of all backgrounds come together to know Jesus.

Considering the Week of Prayer for Christian Unity (observed in the church Jan. 18-25) and the ecumenical foundations of Alpha, Michele believes “the Lord wants us to be unified. The world is so lost, we have to come together. We can agree on so much, especially the life, death and resurrection of Jesus,” she said.

For those who want to get involved in ministry, Michele and John have simple advice: just do it! They say small groups are a great way to start and it’s simple if you are willing to open your home. They point to a treasury of Catholic formation materials, like those from Bishop Robert Barron’s Word on Fire and locally based Ascension Press.

For those who are married, the Domans also advise going to Mass and praying together.

The fruit that has grown from Michele and John’s 50 years of marriage certainly points to its ultimate source: “Once you have a personal relationship with Christ, it changes everything,” Michele said.

PREVIOUS: Not seeking religious life, Sister Alice heard the call in the classroom

NEXT: Teaching teens the value of life is her life’s work