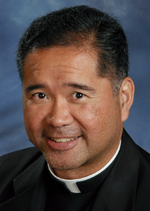 Father Armand D. Garcia, 49, was arrested March 4 on three charges of rape, corruption of a minor and sexual abuse of a minor.

A priest of the Philadelphia Archdiocese ordained in 2005 and a former pastor of St. Martin of Tours Parish in Northeast Philadelphia, Father Garcia is alleged to have committed the crimes on Aug. 1, 2014.

At the time he was parochial vicar at Immaculate Heart of Mary Parish in the city’s Roxborough section. He was assigned to the parish in 2011 after having taken a voluntary personal leave from ministry the prior year.

The year-long investigation into his conduct by the Philadelphia District Attorney’s Office spans from 2014 to 2017, when he was pastor of St. Martin of Tours, according to a statement from the archdiocese.

The charges against Father Garcia “are serious and disturbing,” said archdiocesan spokesman Ken Gavin in a statement.

“The archdiocese is cooperating fully with law enforcement regarding this matter and remains fervently committed to preventing child abuse as well as protecting the children and young people entrusted to its care.”

Last March 16, the archdiocese had placed Father Garcia on administrative leave immediately while Philadelphia law enforcement investigated “alleged misconduct with minors on the part of Father Garcia” and executed a search warrant at the St. Martin rectory the same day, Gavin said at that time.

The priest has been living in a private residence since that time and he has not been permitted to exercise public ministry, administer the sacraments or present himself publicly as a priest.

At the time of last year’s investigation, the allegation of misconduct with a minor was the first such report received on Father Garcia, according to the archdiocese. He had cleared criminal background checks and child abuse clearances, and had completed the archdiocese’s mandatory safe environment training courses.

Gavin added that parishioners of St. Martin and Immaculate Heart of Mary will soon be informed of the arrest and counselors will be made available at that time.

In addition to the rape and child corruption charges indicated in his arrest report, Father Garcia is also charged with abusing a minor through the use of  “photographs, videotapes, depict(ions) on computer or films,” according to the Pennsylvania statute defining the charge.

After posting 10 percent of $250,000 bail, Father Garcia was released from custody March 4. He faces a hearing March 14 in the Philadelphia Court of Common Pleas before Judge James M. Lynn.

The priest, not the archdiocese, will be solely responsible for expenses related to his legal defense, according to Gavin.

Father Garcia has had the following parish assignments in the archdiocese: