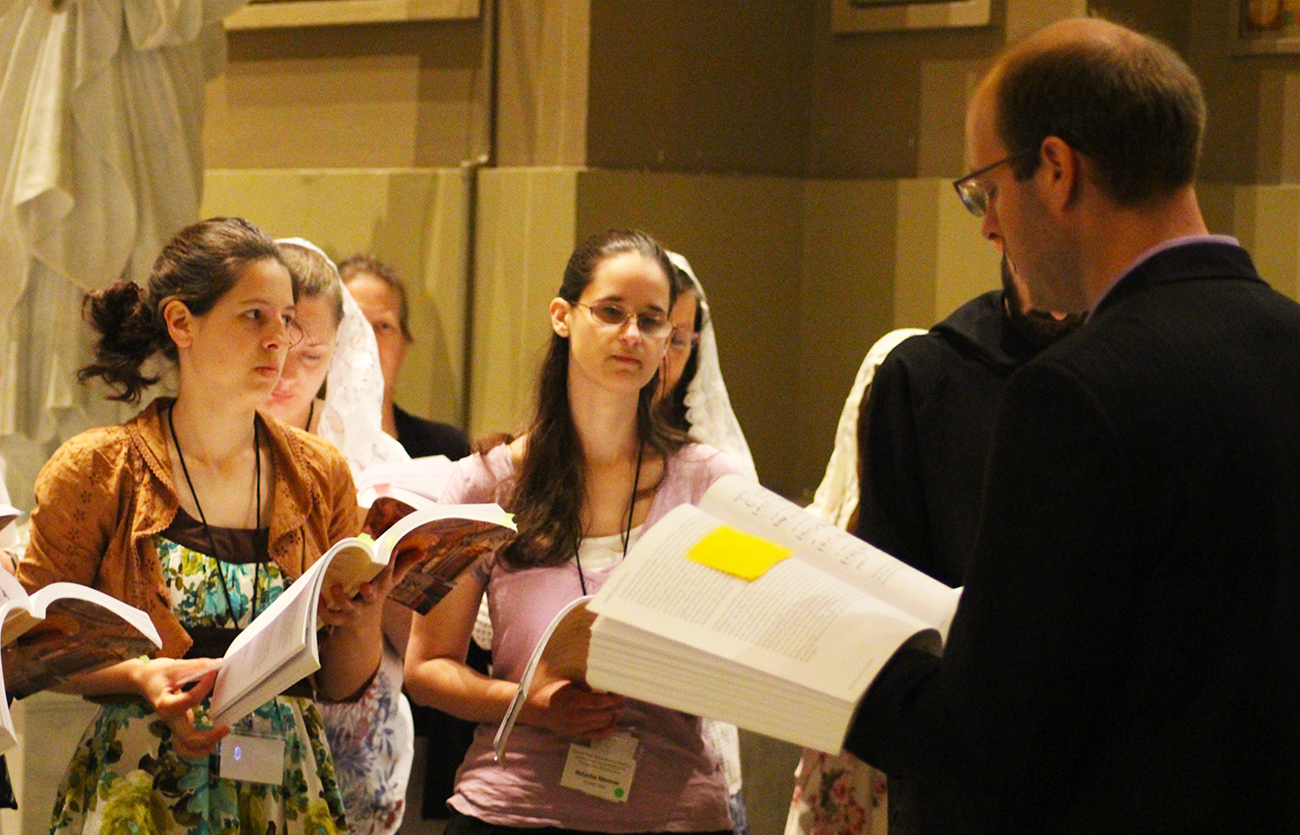 Participants in the Church Music Association of America’s 29th annual colloquium prepare to sing Gregorian chant at Mass in the Extraordinary Form, celebrated July 6 at the Cathedral Basilica of SS. Peter and Paul. (Photo by Gina Christian)

Amidst the booming Fourth of July fireworks earlier this month, the ethereal sounds of chant could be heard just off the Benjamin Franklin Parkway.

The ancient melodies were brought to life at an annual colloquium of the Church Music Association of America (CMAA), which was hosted by the Cathedral Basilica of SS. Peter and Paul from July 1 through 6.

Now in its 29th year, the gathering drew more than 235 professional and volunteer musicians, priests, deacons and seminarians from across the United States and an estimated 10 countries.

Participants put their skills to work at daily liturgies celebrated in both the ordinary and extraordinary form in Latin, Spanish and English. Daily prayer and fellowship rounded out the schedule.

The annual colloquium, which the cathedral welcomed for the first time, plays a key role in advancing liturgical music, according to Father Dennis Gill, director of the Archdiocese of Philadelphia’s Office for Divine Worship and rector of the cathedral.

(Listen to samples of chant from the CMAA Colloquium, plus interviews with Father Gill and Catholic television producer Diana von Glahn.)

“We’re behind,” said Father Gill of the music used throughout Catholic churches in the United States. “We’re all still catching up with the liturgical movements that happened before the Second Vatican Council, and also with the Council itself.”

More needs to be done to ensure that the faithful “appreciate and understand more fully” that the “liturgy is Christ, and when we celebrate the liturgy, we actually encounter and participate in this mystery,” he noted.

Music is an “indispensable aspect” of this experience, said Father Gill, adding that “a great amount of contemporary liturgical music isn’t easily accessible to the person in the pew, since the melodies are not memorable.” 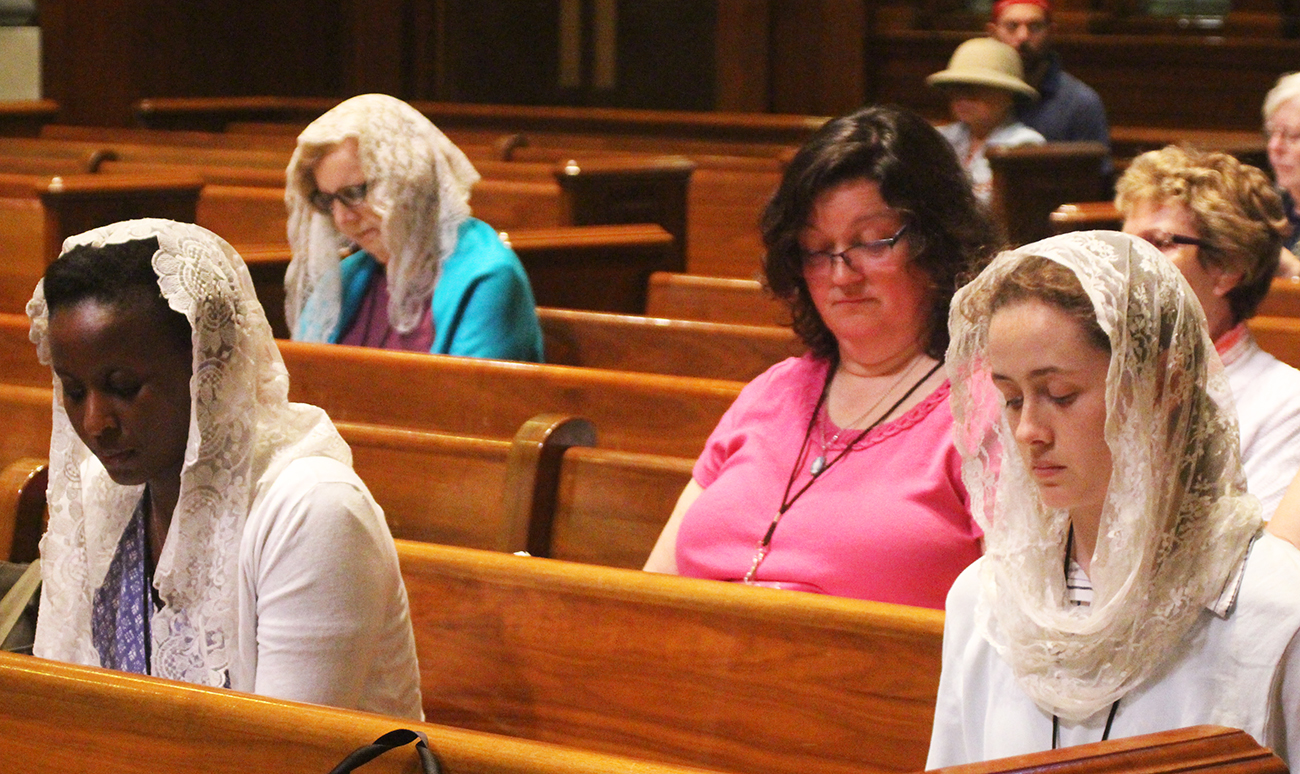 Worshipers attend Mass in the Extraordinary Form at the Cathedral Basilica of SS. Peter and Paul as part of the 29th annual colloquium of the Church Music Association of America. (Photo by Gina Christian)

Refocusing on the importance of the liturgical music texts, which are generally taken from Scripture, is vital, said Father Gill.

For that reason, he added, chant is particularly suitable for liturgical use, since it provides an “inexplicable union between the sound and the words.”

Although many associate it strictly with ancient and medieval music, “chant is actually more common than we think,” said Nathan Knutson, director of sacred music at St. Charles Borromeo Seminary in Wynnewood.

“We can chant at a football game, for instance,” he said, pointing out that chanting the liturgy — which requires an “elevation of the voice” — has been historically necessary, since “the church did not have microphones for nearly 2,000 years of its existence.”

The use of chant can promote what the Second Vatican Council termed the “full and active participation by all the people” in the liturgy, partly because it discourages the “cantor as soloist approach,” said Professor William Mahrt of Stanford University, who serves as president of the CMAA.

Father Gill stressed that the ordinary parts of the Mass “should be almost naturally, spontaneously engaged and sung” by the congregation.

“It should be very easy for people to come together to sing the Gloria, or the Sanctus, or even the Credo,” he said. “They shouldn’t have to think, ‘What are we singing? How do we sing it?’, because it’s meant to be sung.”

Mahrt also noted that chant fits with the Second Vatican Council’s call to “(adapt) the liturgy to the culture and traditions” of “the various races and peoples” (Sacrosanctum Concilium, No. 37).

For many colloquium participants, chant deepens the liturgical experience.

“People are drawn to chant because it calms us, and it puts us in a sacred place,” said Diana von Glahn, co-producer of “The Faithful Traveler,” a television series that highlights international Catholic shrines and pilgrimages.

Speaking during a break between colloquium sessions, von Glahn said she was drawn to chant after hearing the backing vocals to “Dante’s Prayer” by Canadian musical artist Loreena McKennitt.

“I thought, ‘What is that haunting music?’, and it turned out to be ‘Alleluia, Behold the Bridegroom,’” von Glahn recalled, referencing an anonymous Russian liturgical setting from the 18th century.

The song led von Glahn, who had been cantoring at Holy Martyrs Parish in Oreland, to delve more deeply into chant repertoire, which she believes is a better fit with the average human singing voice.

“I find that most of the songs as written are too high for the congregation,” she said. “So when I would be up there singing, no one would be singing with me. Instead, everybody would be looking at me like it was a performance, and many would not sing, because they would figure that my voice is better than theirs.”

Von Glahn now attends Mass in the Extraordinary Form in Latin at St. Mary Quasi-Parish in Conshohocken, and for her, the universal language of Roman Catholicism is also essential to her liturgical worship.

“I was never a Latin Mass attendee,” she laughed, noting that a chance visit to St. Mary’s on All Souls Day led to her regular attendance and to joining the parish choir.

Father Gill said that Latin “is part of our heritage, and should not be a stranger to people.”

Early in his pontificate, St. John Paul II described Latin as “the splendid language of ancient Rome” to which “the Roman Church has special obligations” (Domenicae Cenae, No. 10).

“Everybody should be able to sing the Our Father in Latin,” said Father Gill. “It’s a sign of our sacramentality, and there’s something universal about that.”

Von Glahn agreed, saying that the rediscovery of the church’s liturgical heritage is ultimately a journey of growth.

The colloquium offered a structured opportunity to “recognize what we believe and understand the liturgy to be, and what is the relationship of song to the liturgy,” said Father Gill.

“The liturgy is not a consumer experience, and music is not just a matter of taste,” he said. “There’s a discipline that surrounds liturgical music, based on sound principles that have come forward from our tradition.”

PREVIOUS: Care for the caregivers: New ministry helps those who aid elders