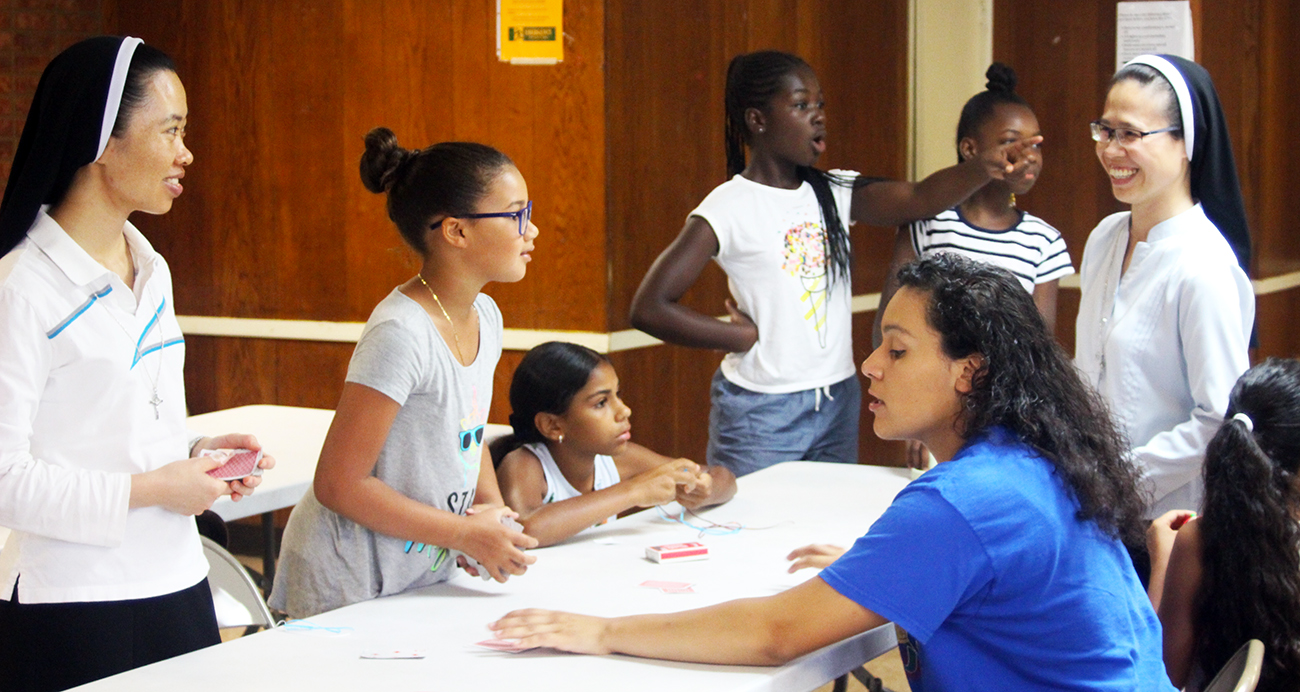 Lovers of the Holy Cross Sisters Luyen Pham (left) and Linh Tran play cards with students at Catholic Social Services’ Out of School Time (OST) site at Holy Innocents Parish in Philadelphia, July 31. Based in Vietnam, the sisters were invited by Catholic Social Services to work at the OST program for several weeks to enhance their English language skills prior to their upcoming college studies in New Jersey. (Photo by Gina Christian)

Two women religious from Vietnam have been working on their Philly accents this summer, while helping kids served by the Archdiocese.

Sister Linh Tran and Sister Luyen Pham have been staying at the convent of Holy Innocents Parish since early July, assisting at Catholic Social Services’ Out of School Time (OST) program there as part of a short-term mission.

Located at Holy Innocents and eight other sites throughout the city, the OST programs annually provide some 16,000 children with an array of academic, recreational and social support.

The sisters, both members of the Lovers of the Holy Cross congregation, traveled from their convent in Saigon (present-day Ho Chi Minh City) to gain greater fluency in English. In addition to helping with student learning projects, their daily “coursework” has included playing basketball, kickball, and Fortnite with their charges – and they’ve picked up some slang along the way.

“I can now say ‘Seriously?’ as the kids do when they don’t quite believe you,” said Sister Linh, laughing.

Sister Luyen added that her students ask, “What’s the word?” if they want more information about a topic.

Learning English (often regarded as a difficult language for non-native speakers) from kids in “summer mode” can be a struggle, said the sisters.

For native Vietnamese speakers, the “th” sound, as in “thick” and “this,” can be particularly tough.

“We tend to say more of a ‘d’ sound,” said Sister Luyen, noting that her students have also helped her to pronounce words that include “sh.”

On the flip side, Vietnamese can be equally tricky for non-native speakers, since it has six separate tones, or pitches, that can change the meaning of a word.

Both sisters, who will continue their English studies at Assumption College for Sisters in northern New Jersey, are used to facing challenges – including battling their hometown’s legendary traffic, which they (and some 7 million other commuters) navigate by motorcycle.

That’s because in Vietnam the cost of an average new car, such as a Toyota Camry, is about $60,000. Even train travel, which both sisters have enjoyed as part of their Philadelphia stay, is less common in Vietnam.

“We only take the train for big trips,” said Sister Linh. “I ride a small Yamaha motorcycle every place, including to the parish where I work. Motorcycles are the major form of transportation in our city.”

She added that she and her fellow sisters only wear their habits to attend Mass and to perform their pastoral duties.

In other settings, the congregation wears “regular clothes,” since “Vietnam is a communist country” where the government “fears the people will follow the Catholic faith” if clergy and religious move about freely in society wearing their attire, said Sister Linh.

A number of convents, including those from their order, have faced “many difficulties because the government wants to take the land of the communities.”

In May 2018, UCA News reported that one nun in Hanoi was beaten unconscious as she and other St. Paul de Chartres sisters protested the attempted confiscation of their convent’s land by a local builder.

Foreign investors and developers are also pressuring the Lovers of the Holy Cross to give up their historical site at Thu Thiem in Ho Chi Minh City.

“They say our land is a diamond, and they want to build on it,” said Sister Linh. “But we’ve lived there for 179 years, and we don’t want to give up our historical home.”

The order has deep roots in Vietnam, having been founded some 350 years ago by French Bishop Pierre Marie Lambert de la Motte. There are currently 30 congregations, most of which are in Vietnam, with a handful in Thailand, Cambodia, Laos and the United States.

As they wrap up their summer mission, Sister Linh and Sister Luyen said they will treasure their time in Philadelphia.

“The staff here is so nice, and so friendly,” said Sister Luyen. “They’ve helped us in everything, and the kids taught me how to play kickball and some new card games.”

Sister Linh said both were grateful for the hospitality shown them by the Immaculate Heart of Mary sisters in residence at Holy Innocents, and that the City of Brotherly Love was definitely worth the trip.

“I will remember all the smiling faces of the children,” she said.