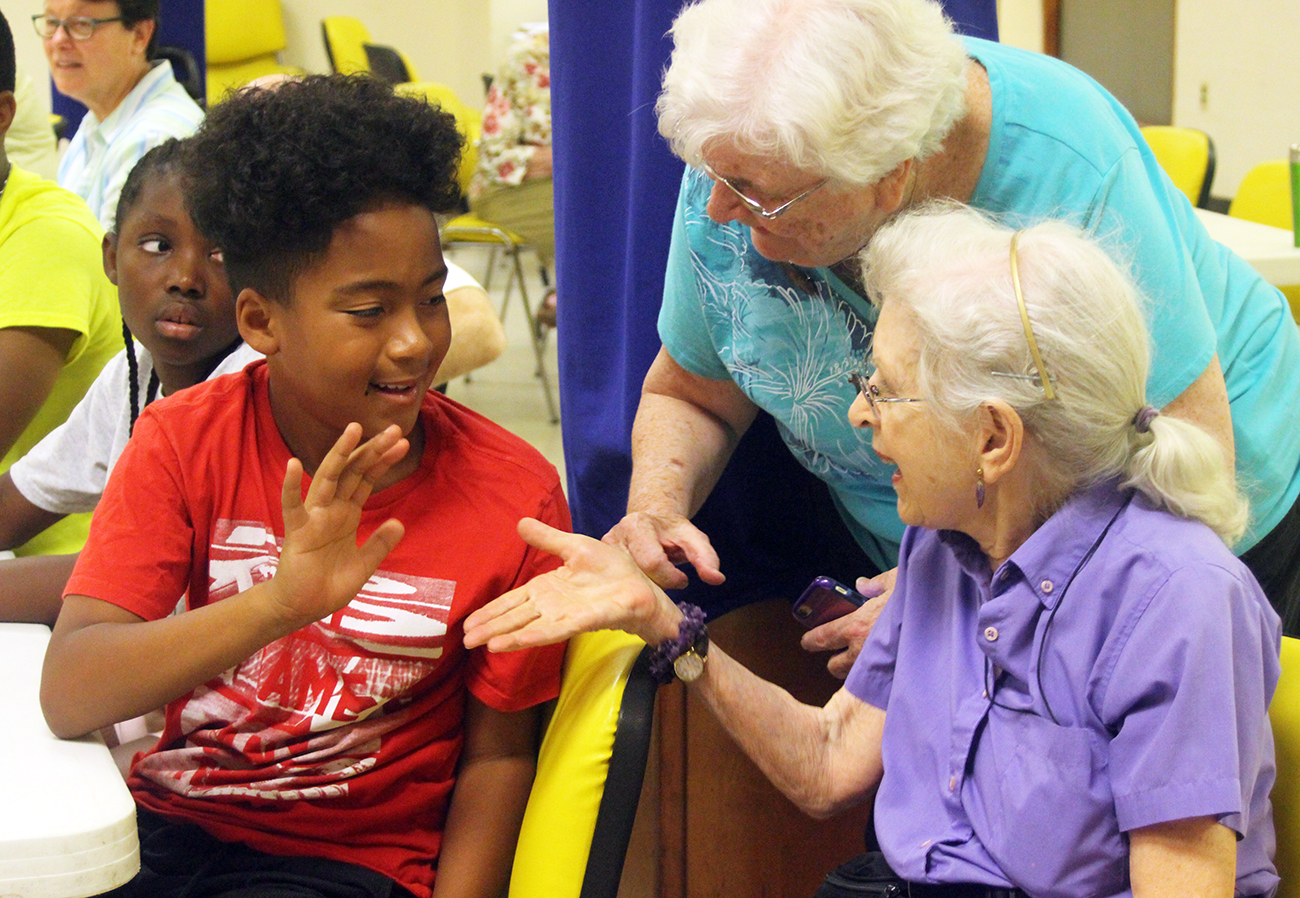 Social media followers may have replaced pen pals, but one group of area students recently revived the age-old tradition of letter-writing.

This summer, students at St. Helena’s Out of School Time (OST) program in Philadelphia’s Olney neighborhood put down their cell phones to correspond with members of a local senior club.

Some 15 children, ages 9 to 11, exchanged a series of handwritten letters with older adults who gather each Wednesday at nearby St. Paul’s Lutheran Church.

On Aug. 7, the St. Helena OST students met up with the seniors at St. Paul’s to put faces to names over pizza, cake and a wildlife presentation by staff from the Philadelphia Zoo.

Now in its second year, the pen pal project was launched as a way of developing the students’ writing skills while broadening their horizons, said Tracey Brooks, director of St. Helena’s OST program.

One of nine sites operated by archdiocesan Catholic Social Services (CSS) throughout the city, St. Helena’s OST provides an array of academic, recreational and social support year-round. In total, some 16,000 children benefit each year from the OST programs.

Brooks said the initial letters written by the students to the seniors were “hilarious.”

“They started off by introducing themselves and then asking, ‘Do you like Fortnite?’” Brooks laughed. “Then they asked them, ‘When were you born?’ And I thought, ‘Great way to break the ice, kid.’”

Nine-year-old Drake Palmer admitted that he was “nervous” when he had to write his first letter.

“I really didn’t know what to say at first,” said Palmer. “But then I just started thinking about it, and I asked what sports they liked and what TV shows they watched.”

Palmer informed his pen pal that he was a regular viewer of the TV show “SpongeBob SquarePants.” Unlike many of his classmates, however, Palmer said he “did not ask about Fortnite” in his letter.

Ann Farley, one of the senior club’s coordinators, said that reference to the popular video game was puzzling at first.

“We didn’t know what it was,” she confessed. “When I saw the question about ‘Fortnite,’ I said, ‘Well, a fortnite is a two-week period of time.’ But we asked them what it was, and they told us. So it was funny.”

Even more amusing, Brooks said, were the students’ reactions when the seniors replied.

“When they got the first letters back and learned that these seniors were born in the 1940s or so, the kids asked me, ‘Was everything in black and white then?” Brooks said. “They couldn’t believe there was a time when people didn’t have cell phones, or when you didn’t use a SEPTA key to ride the bus.”

Students were also amazed to learn about some of the challenges the seniors had faced when they were young.

“Until I was 11, I grew up in an area where we had no electricity and we had no inside plumbing,” said Joan Evans, another of the senior club’s coordinators. “And to live through an experience such as that, the kids are just in awe.”

Several of the seniors had emigrated to the U.S. from a variety of nations, including Germany, Nigeria and the Philippines, as well as several Caribbean islands, and the difference in perspective was “mind-blowing” for the students, Brooks said.

Because English was not the primary language of many of the seniors, Sister of Mercy Anna Marie Lesutis was at first skeptical about the pen pal project.

“Many of the seniors in the group are bilingual in spoken but not written English,” said Sister Anna Marie, who coordinates the senior group in addition to serving as a health promoter and food bank manager at St. Helena Parish. “They kind of shied away from it, but then they were willing to do it, with help.”

The project was a way to bridge generational and cultural gaps, while honing the students’ writing skills and building a sense of community, said Brooks.

“They’re connecting with their neighborhood,” she said. “And the kids going to visit the seniors, some of whom only see their grandkids once a year, shows that they care.”

Young and old can learn from each other through such outreaches, said Evans.

“It’s about looking through different eyes,” she said. “There is more to life than our little dimension of seeing.”