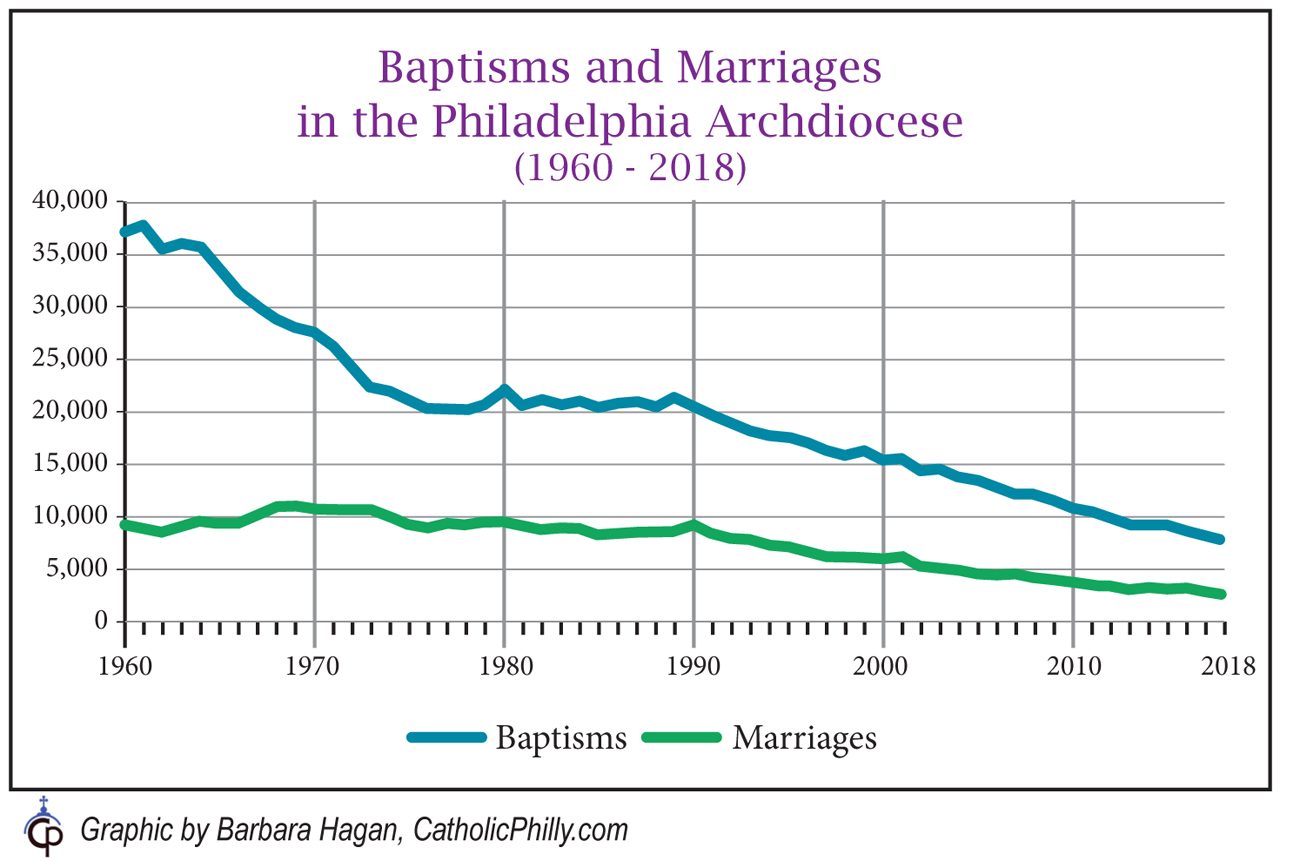 Much like the figures showing attendance at Sunday Masses dropping in the Archdiocese of Philadelphia, two other key indicators of vitality in the local church also are in steep decline, and have been for more than a half-century.

The reception of the sacraments of baptism and marriage have declined dramatically in the archdiocese since 1961, according to statistics from the archdiocesan Office for Parish Service and Support.

While the Mass attendance figures were culled from the October count census performed every year since 1990, the figures on baptism and marriage stretch back much further. Together they present a long-term trend line that can be a valuable milestone to planning for the parish and institutional needs of the church in coming years.

The fertility rate in the United States has dropped by about half since 1961, and most families today do not include more than two children. Fewer children naturally means fewer baptisms, and over many years, a smaller Catholic community.

The archdiocese’s historical figures recorded only baptisms of infants while more recent records break out baptisms among babies, young children and school-age children. Although the number of older baptized children has been rising in recent years, as more parents delay presenting children for the sacrament until they enter school, infant baptisms still make up the majority of those receiving the sacrament.

Statistics for that first sacrament of initiation, whereby a person enters the Christian community, may be the best indicator of the size of the local Catholic community in the future.

Another key sign of future vitality is reception of the sacrament of marriage. Anecdotally one is aware of weddings increasingly taking place at country clubs, on beaches and other settings outside a church by couples raised Catholic. Statistically the trend is quite clear.

The current figures include not only Catholic weddings in the traditional sense but also “convalidations,” or a rite and process by which a priest blesses an existing marriage after a period of formation for the couple.

The two Catholic sacraments of baptism and matrimony are important indicators of the future because they represent beginnings — baptism as the sacrament of initiation into the Christian life and marriage as the start of the family, what has been called the “domestic church.”

One archdiocesan priest with long experience in education and parochial ministry sees the two sacraments not just as family celebrations for the recipients, but linked strongly to the parish community, the wider church and especially to Christ in the sacrament of his Body and Blood.

“If the Eucharist is the source and summit of Catholic worship and if baptism is the first sacrament of initiation, which finds itself completed and fulfilled in the Eucharist, I think perhaps the decline of baptisms is rooted in a lack of appreciation of the centrality in the Eucharist in our life,” said Msgr. Andrew Golias, parochial vicar and senior priest at St. Martha Parish in Northeast Philadelphia.

A recent much-touted survey found 69% of Catholics do not believe in the real presence of Christ in the Eucharist.

A former pastor, seminary professor, doctoral theologian and renowned homilist, Msgr. Golias explained that Christianity itself was a “communal experience.”

Since the church was “born on the cross of Christ” and people’s experience of God and salvation is communal, initiation into a community of faith and “being shaped from the very beginning by the life of the community” is fundamentally important, the priest explained.

Although some parents wish to leave the decision of whether to be baptized into the Christian community up to their child, Msgr. Golias believes it is “important that they be formed so that they have a background to be able to make an active choice once they’re older.”

Since salvation by Christ is a communal experience in the church he founded, “it’s not just a question of the individual, it’s a question of salvation in and through a community of believers,” Msgr. Golias said.

He recommended the church’s option to celebrate the sacrament of baptism within a parish’s Sunday liturgy so that all parishioners might witness it as “a family experience which is beyond the natural family of the child,” he said.

Celebrating baptism, first holy Communion, confirmation and even weddings — although the latter presents logistical challenges for guests and receptions — within the Sunday celebration of the Mass “says something about the whole communal dimension of what we’re about when we celebrate sacraments,” Msgr. Golias said.

Even for couples who do marry in a church, “it takes a while” for them to realize that they are meant to “become a sign of the love Christ has for his church,” said Msgr. Golias. “Therefore of its very nature marriage is communal because it creates the community of the church that we call the domestic church, or the family.”

“The ultimate effect of the Eucharist is the oneness we have in Christ by celebrating it,” said Msgr. Golias. “And somehow that’s got to be taken out and lived on Sunday afternoon to the following week.”

NEXT: Migrants, families plead to ‘make America great through love,’ not hatred