O’Rourke remembered as a ‘pro’s pro’ 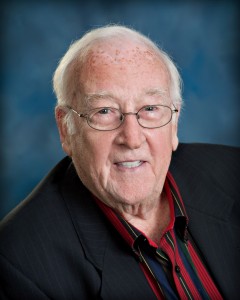 Most people in the Delaware Valley were unaware of what Jack O’Rourke looked like, but they certainly recognized his voice.

For the past 20 years, O’Rourke was the sports reporter who provided updates and summaries of Phillies games for KYW Newsradio 1060. He was, in the words of Phillies broadcaster Chris Wheeler, a “pro’s pro,” which, in journalistic speak, is high praise.

So it came as a shock to media colleagues when O’Rourke, a Massachusetts native and member of East Norriton’s St. Titus Parish, died in the early hours of Sept. 17.

A short time earlier, O’Rourke — a father of four, grandfather of seven and great-grandfather of five — had finished telling the Delaware Valley how the Phillies lost, 4-2, to the St. Louis Cardinals. Minutes later, he collapsed on the floor of Citizens Bank Park’s pressroom.

Although medical personnel transported O’Rourke to a local hospital, he quickly succumbed to a reported aortic aneurysm. He was 80.

“There are no words to describe this,” said KYW colleague Tom Maloney, a 1962 Father Judge graduate. “When you met him, you felt as though you knew him. He was 80 years old, and he remained a kind, decent man to the end.”

For the remainder of the season, including the upcoming playoffs, Maloney said O’Rourke’s normal seat on the bottom row in the press box will be kept empty as a tribute to a man whose personal resume spanned six decades and included just about every important historical event — and numerous prestigious awards — that a broadcaster could experience.

It was the contrast between a brilliant journalism career in both news and sports, and an unassuming approach to his personal success, that left many of his friends lauding O’Rourke’s integrity and humility.

“This guy did it all, but you would never know it,” said Wheeler, who often bantered with O’Rourke during the middle innings of a game. “He was a sweet man. He was so likeable and it didn’t matter who you were. I think he was on this earth to make other people happy.”

“Jack never had an agenda,” Wheeler said. “He was never a phony. He wasn’t out to ‘get’ a story. He was objective. That’s why he was so respected. I will miss him a lot.”

Comcast SportsNet sports reporter Leslie Gudel recalled how O’Rourke was always focused on people and never too busy to share a moment or two with those he encountered in the pressroom.

“He never cheated you with his sincerity, so you never wanted to cheat him either,” Gudel said. “He was so bright. Everything about him was so caring and pleasant. It’s so wonderful that he never let himself get too old to do what he loved.”

Among those who spoke with O’Rourke every weekend was Ed Deal, a Citizens Bank press box security fixture and tour guide. A 1963 graduate of Roman Catholic, Deal had given O’Rourke a promotional knit hat that fans received before a recent game.

“I was teasing him about how he had to wear it for the centerfield camera,” Deal said. “He just smiled and said, ‘OK’. He was the nicest guy.”

After a post-game news conference, Charlie Manuel spoke privately about a man he considered a “class person.”

“He was a friend of mine,” Manuel said. “I’m really disappointed that he won’t be around any more. I always liked Jack. There was nothing not to like.”

The last Phillie to speak with O’Rourke was rookie pitcher Vance Worley, who will be in the bullpen in the playoffs, despite a sterling record as a starter.

Worley and O’Rourke talked about the situation — an 80-year-old reporter and a 24-year-young professional baseball player.

Fitting final words for Jack O’Rourke to hear after interviewing a professional athlete for the final time.

PREVIOUS: Wood cruises past the Prep, 42-7

NEXT: ‘On the go’ with three-sport athlete