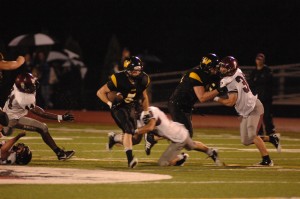 Ryan McMullin, an Archbishop Wood running back, drives past a St. Joseph’s Prep defender after his offensive line opened up a big hole.

It was only one moment, but it summed up the undisputable reality of what was occurring.

Desmon Peoples, one of many terrific football players at Archbishop Wood High School, had busted loose and was headed toward the end zone with not a defender in sight. As he cradled the pigskin in his right hand, he raised the index finger on his left hand for all to see.

And after finishing a 57-yard jaunt, his Vikings were ahead of St. Joseph’s Prep by an unthinkable 28-0 … and it wasn’t even halftime yet.

Thanks in part to a running clock that helped alleviate understandable embarrassment, the Vikings thoroughly dismantled the Hawks, 42-7, Friday, Sept. 23 at William Tennent High School. And while the driving rainstorm that lasted all four quarters definitely affected the Prep’s vaunted passing attack, there was no debating who the better team was in every facet of the game.

“We weren’t able to do some things that we normally do,” said Prep senior quarterback Skyler Mornhinweg, who was held to fewer than 100 total yards (passing and rushing) after having accumulated 386 in the previous week’s slugfest win over perennial power North Penn. “But they played a great game and deserved the win.”

There have been times, however rare, that a team thoroughly defeats an opponent during the regular season and then rebounds in a re-match later on in the year. Because the Prep is a Class AAAA team and Wood is in the AAA division, a re-match won’t be happening.

But Wood’s victory is its second straight over the Prep dating back to last year’s memorable 21-20 triumph, so decisive that it strongly suggests the Vikings are now in a class of their own.

Asked to rank this victory against the others during his outstanding 48-11 reign as Wood’s coach for the past five seasons, Steve Devlin didn’t hesitate.

“This is as satisfying a win as I’ve ever had,” he said. “We beat a very good football team and I’m very proud of our effort.”

Later, Devlin and both Peoples offered verbal game balls to both the offensive line and defensive line. While the former opened up paths for 323 rushing yards, the latter limited the Prep to 129.

“It always starts with the line,” Brandon Peoples said. “They do their job great, and we just follow their blocks.”

NEXT: O’Rourke remembered as a ‘pro’s pro’