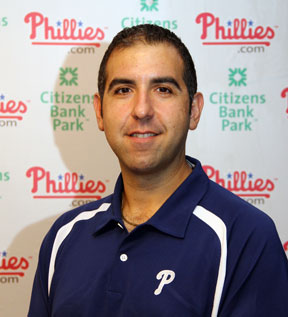 Even though he was only 8 years old, Sal DeAngelis vividly remembers attending his first Phillies game.

Now 34, DeAngelis and baseball are inseparable. Not only does the graduate of Nazareth Academy grade school, Archbishop Ryan High School (class of 1995) and Holy Family University maintain the same passion and loyalty for arguably the most popular franchise in Philadelphia, he is employed by the Phillies in a very important position that literally affects every fan who slips through the turnstile to enjoy three hours of professional baseball.

His job title — manager of ballpark operations and security — seems a tad intimidating, and perhaps it should be, considering that anything that happens inside or directly outside Citizens Bank Park is somehow tied to DeAngelis, whose muscular, six-foot-four-inch frame certainly supports his status.

As for security, DeAngelis is in constant contact with the Philadelphia police and communication necessity often extends to state police, the Department of Homeland Security, the FBI and the Secret Service.

Asked to assess how he juggles so many daily and nightly responsibilities while effectively communicating with his staff and immediate supervisors, DeAngelis points to the example of his parents; his mother is a graduate of St. Hubert High School and his father a native of Italy.

“My mom is one of the best event planners you can imagine,” DeAngelis said. “The way she would take hours preparing for things like holiday dinners, we would tease her and make fun of her. Now, I’m the same way and (his co-workers) tease me.

“My dad is very sociable with all kinds of people. It doesn’t matter who it is. At the doctor’s office, at a supermarket, he tells everyone how proud he is of his kids (including younger son Lorenzo, 33, also a Ryan graduate). I’m proud to say that I think some of their gifts may have rubbed off on me.”

Despite the pressure of helping provide safety for roughly 4 million people over the course of more than six months, DeAngelis appears unfazed.

“When you consider how many people work for the team around the clock — from the day-to-day operations to the vendors all the way to those who clean the place after a game — it probably numbers close to 1,000,” DeAngelis said. “If anyone is of the mindset to do harm and sees a line of people all over the place, it’s kind of a deterrent.”

DeAngelis has been part of the Phillies family since his junior year of high school (first as an usher, then as an intern and a full-time staff member since graduating from college), and it is a career that has not lost its luster. A baseball and basketball player in grade school and a lacrosse player and musician in high school, DeAngelis considers his job a privilege.

Who, he reasons, wouldn’t want to come to work at a place that produces as much electricity and excitement as does one of Major League Baseball’s most successful franchises?

“The reason we all love our job is two-fold,” he said. “We work in sports with people who appreciate their job and are really good people. And we work for a winning team. Who doesn’t love to be associated with a winning team? Who wouldn’t want to win a World Series?”

However, no matter how thrilling a Phillies’ victory might be, DeAngelis must remain stoic. Just as it is for media members in the press area, the unwritten rule involved with securing a ballpark is to maintain a stiff upper lip. No outward expression of cheering.

So when the Phillies captured our fancy by winning the World Series in 2008, one of the first persons on the field was DeAngelis … not as a fan, but as part of a security force.

“My heart was beating fast just like everyone else’s,” he said. “I was thrilled. Couldn’t wait to celebrate. But that had to be later. I don’t think I even broke a smile. But inside, I was ecstatic.”

DeAngelis had learned that lesson while at Holy Family. The school’s athletic director, Sandy Michael, reminded everyone who helped work the table during basketball games (scorekeeping, clock operation, etc.) never to root during a game.

“If you ever cheer at the table,” she said, according to DeAngelis, “you will never be back at the table again.”

DeAngelis laughed when recalling how intimidated he was despite his significant height towering over the diminutive Michael, not to mention the fact that Michael is his aunt.

“It made an impact because she was very serious about how things needed to be run,” DeAngelis said. “She meant business.”

DeAngelis knows that feeling all too well.