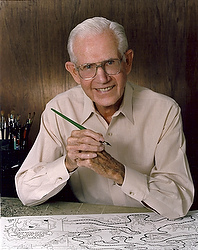 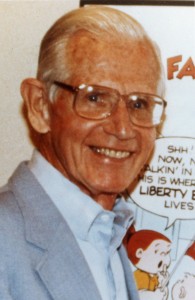 Born William Aloysius Keane, he started cartooning at St. William School and honed his skills at Northeast Catholic High School, where he graduated in 1940. He never forgot his roots; for many years one might notice the familiar red and white NC pennant hanging in the children’s bedroom in the strip.

“I hate to tell you how many cartoons he made for us,” said Lenny Knobbs, a former alumni president at North. “He was a frequent toastmaster at our communion breakfasts, and I remember him staying three hours drawing cartoons for everyone.”

Keane met and married his wife, Thel, while serving in Australia during World War II, and after the war they settled in Roslyn. They had five children, Gayle, Neal, Glen, Christopher and Jeff. He worked at the old Philadelphia Bulletin from 1946-59, and early strips included Silly Philly and Channel Chuckles.

The family moved to Paradise Valley in 1959, and Family Circus, with its distinctive circular panel, was launched the following year. A gentle strip featuring a suburban family with four children, Billy, Dolly, Jeffy and PJ, it is loosely based on his own family life and often featured religious themes.

For a number of years Keane generously allowed The Catholic Standard & Times to run the cartoons free of charge, and he also drew a circulation campaign poster for the newspaper.

It started when Cardinal John P. Foley was editor of the paper.

“I liked his cartoons and I wrote and asked him if we could use them and he said he would be honored,” Cardinal Foley said. “He was absolutely a good representative of the Church, and I recommended him as a speaker at the Catholic Press Association in Arizona and I think in Philadelphia. He always sent me a calendar up until last year with a little bishop drawn in the corner.”

Cardinal Foley’s favorite, as with so many others, was the panel that showed little Jeffy going into his parent’s room at night and say, “I don’t feel so good, I think I need a hug.” 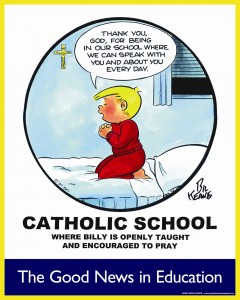 Catholic cartoonist Bil Keane created this poster for the National Catholic Educational Association’s 2012 convention in Boston April 11-13. Keane, creator of the comic strip “Family Circus,” died Nov. 8 at age 89 of congestive heart failure at his home in Paradise Valley, Ariz. His kid-friendly comic gave readers a funny version of his own life at home and became one of the most widely syndicated cartoon panels in the world. (CNS photo/NCEA)

He drew posters for the National Catholic Education Association for Catholic Schools Week as well. The NCEA honored Keane in 1992 with its Elizabeth Ann Seton Award for his “steadfast commitment to a Catholic way of life and his steadfast promotion of strong family values to his 100 million daily readers.”

“I don’t set out to preach at all,” he told the newspaper in 1995. “I don’t consider myself an evangelist, but since I feel religion is a natural part of family life, I show that in cartoons periodically.”

Although his children are now grown and Thel died in 2008, in recent years Keane’s son, Jeff, has continued Family Circus in his father’s footsteps.